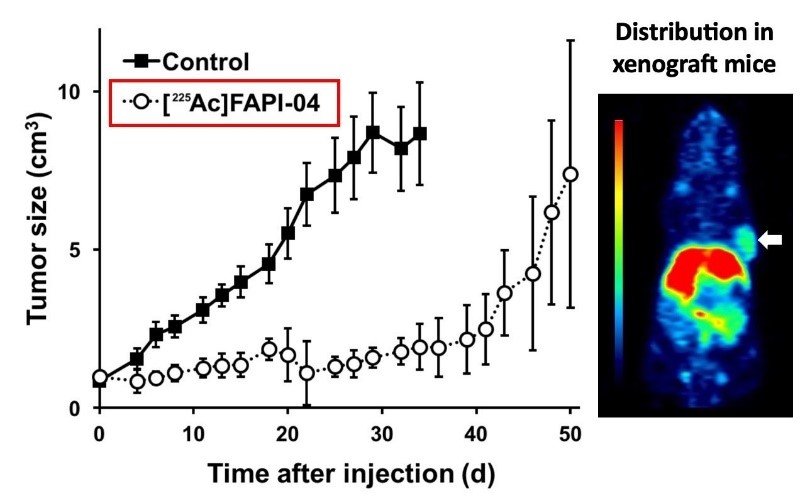 Fig.1. (a) Human pancreatic cancer cells were grafted onto mice, which were then given targeted alpha radiation therapy (225Ac‑FAPI‑04). Compared with mice given a control treatment (black squares), mice given 225Ac‑FAPI‑04 (open circles) showed a marked decrease in tumor growth. (b) Mice were injected with targeted positron radiation (64Cu-FAPI-04) to enable positron emission tomography (PET) imaging. The imaging shown here indicates uptake of 64Cu-FAPI-04 into the pancreatic tumor (arrow).

In a collaborative research between Osaka University and the University of Heidelberg, researchers are exploring a new method of treatment that brings powerful yet targeted radiation therapy directly to cancer tissue. The method may offer an effective treatment for pancreatic cancer with fewer side effects in surrounding organs.

The researchers published their study in the Journal of Nuclear Medicine.

Chemotherapy and radiation therapy typically work by stopping cancer cells from dividing. Side effects often come about because the treatment also stops healthy cells from dividing and thriving. “With traditional anti-cancer therapies, there’s a tradeoff between efficacy against cancer cells and off‑target effects in non‑cancerous cells,” explains Dr Tadashi Watabe, lead author of the study and a researcher in nuclear medicine and tracer kinetics at Osaka University Graduate School of Medicine. “We’re focused on finding ways to re-balance this tradeoff in radiotherapy, by increasing the dose of radiation delivered to cancer cells while keeping it localized to those cells as much as possible.”

We think the approach has enormous therapeutic potential, particularly for patients with pancreatic cancer who’ve exhausted their other treatment options

One way this can be done is by making a radioactive “homing” molecule that, when injected into a patient, travels straight to the site of a tumor to deliver its cancer-killing payload. The research team did precisely that – in this case, using a molecule that goes directly to pancreatic tumors. “We used a molecule with an isotope that emits alpha particles,” says Dr Watabe. “These particles travel a shorter distance than the beta particles emitted by traditional isotopes, which means their off-target effect is limited. Our molecule binds to a protein called FAP, which is found almost exclusively on stroma cells that surround pancreatic tumors and various types of cancers. Together, this allows us to target a high‑energy dose of radiation directly to the site of the tumor.”

The stroma is part of a unique environment that encases solid tumors, acting as a kind of barrier. Treatments for pancreatic cancer are often stymied by this barrier but, remarkably, this doesn’t seem to be the case with the new experimental treatment. In the study, the team offers a proof of concept that their technique can act as a powerful cancer treatment. They injected their FAP-binding molecule into mice that had human pancreatic cancer grafted under their skin. The result? A dramatic decrease in tumor growth with no apparent effect on the body weight of the mice, the latter indicating that the treatment likely had few toxic side effects.

“We are very encouraged by these initial results,” Dr Watabe concludes. “We think the approach has enormous therapeutic potential, particularly for patients with pancreatic cancer who’ve exhausted their other treatment options. What’s especially exciting is that our method of targeting the stroma can in principle work against many other types of cancer. We think this could represent a new path forward in radiation therapy.”

A significantly more effective, minimally invasive treatment for pancreatic tumors may be on the horizon, thanks to a new endoscopy tool created in the Penn State Department of Mechanical…