Instead of pushing catheters into minute veins, the system, devised in Canada by Professor Sylvain Martel and team at the Polytechnique Montréal Nanorobotics Laboratory, uses magnetic forces to pull a guidewire, or catheter, into remote physical locations, guiding medical instruments into narrow and complex vascular structures. The magnetised tip of the device harnesses the fringe field generated by the superconducting magnet of a clinical MRI scanner – coupled with an innovative robotic table – to help overcome one major challenge in endovascular surgery.

As Martel explained: ‘For very thin wire – guidewire or catheter – or tethered instruments that must be miniaturised further to navigate deeper through narrow and most often tortuous vessels, or other constrained physiological spaces, the stiffness of the wire is decreasing so much that at some point pushing the instrument is no longer possible. If such wire or instrument must be as thin as a hair to navigate deeper through narrow vessels, the only way is to induce a pulling force.’

‘A magnetic field is appropriate,’ he continued, ‘because it can penetrate the human body without harm and is not affected by various tissue density. The most important characteristic for a magnetic field to exert a pulling force on a micromagnet, placed at the tip of the navigated instrument, is the gradient, defined as a change of the magnetic field magnitude over distance.’

The highest magnitude of magnetic field is achieved with a superconducting magnet, such as found in clinical MRI scanner, he said; hence the use of the fringe field of an MRI for this project. Whilst the magnetic field inside the MRI scanner tunnel is uniform, the fringe field outside the machine – which is normally reduced to minimal levels – offered opportunities. ‘It’s a very-high-amplitude field that decays very rapidly,’ he pointed out. ‘For us, that fringe field represents an excellent solution that is far superior to the best existing magnetic guidance approaches, and it is in a peripheral space conducive to human-scale interventions.’ 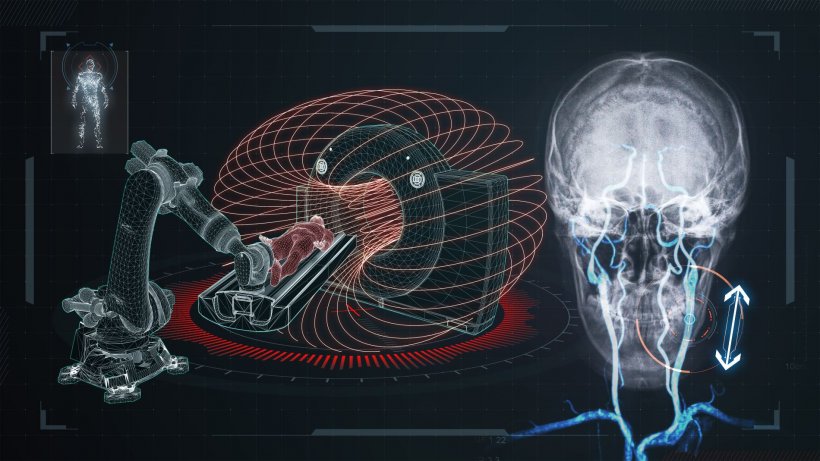 However, the key is a computerised robotic table, he emphasised. This is used to move the patient around the fringe field to induce a high directional pulling force at the tip of the instrument, because the size and weight of the MRI scanner means the machinery cannot be moved to change the direction of the magnetic field.

‘So,’ added Martel, who directs the NanoRobotics Laboratory at the University of Montréal, ‘when the medical specialist navigates the instrument in tortuous vessels, a computer calculates the optimal position for the patient, to exert the highest possible directional pulling force, and then send commands to a robotic table to position the patient accordingly, as the instrument is navigated through a narrow tortuous vessel.’ He believes this is the first time that an MRI fringe field has been used for a medical application.

Movement on all axes

The computerised robotic table, designed by his colleague Arash Azizi, a biomedical engineering PhD candidate, is positioned within the fringe field next to the scanner and can be programmed to move automatically on all axes, to position the patient according to the direction in which the instrument must be guided through their body, using a technique that Professor Martel has dubbed Fringe Field Navigation (FFN). ‘We were using the magnetic field inside the MRI scanner to navigate drug carriers for cancer therapy and no-one was using the external field, he said. ‘Through that, this fringe field had particularities that no other field has, so we were trying to see if we could use its super high gradient for medical applications. From there, I put together a team to prove that the concept works.’ Standard MRI scanners can be used for the technique – with a robotic table installed in the MRI room – and with no impact on image quality.

The team has spent five years developing the concept and, Martel added, ‘So far it’s been very successful and showed in pig models that the instrument can go much deeper than when done manually with experts.’ An in-vivo study of Fringe Field Navigation with X-ray mapping has demonstrated the capacity of the system for efficient and minimally invasive steering of extremely small-diameter instruments deep within complex vascular structures which were hitherto inaccessible using known methods.

The robotic solution has promise for diagnosis, imaging and local treatments and could assist surgeons in procedures requiring the least invasive methods, including deep access to the brain for treatment of brain damage such as an aneurysm or a stroke, those needing diagnostics in hard-to-reach vascular regions and in urology.

Professor Sylvain Martel is Director of the NanoRobotics Laboratory, Department of Computer and Software Engineering, at the Institute of Biomedical Engineering, École Polytechnique de Montréal, Canada, and a Fellow of the Canadian Academy of Engineering. His main expertise lies in nanorobotics and the development of novel instrumented platforms and related support technologies targeted for biomedical and bioengineering applications. He currently leads a multidisciplinary team involved in research and development of new instrumented platforms for the medical field and in bioengineering.

Embolisation – the blocking of vessels - is a key procedure in Interventional Radiology. It plays a steadily growing role in the treatment of various tumour lesions, with hepatic cellular carcinoma…