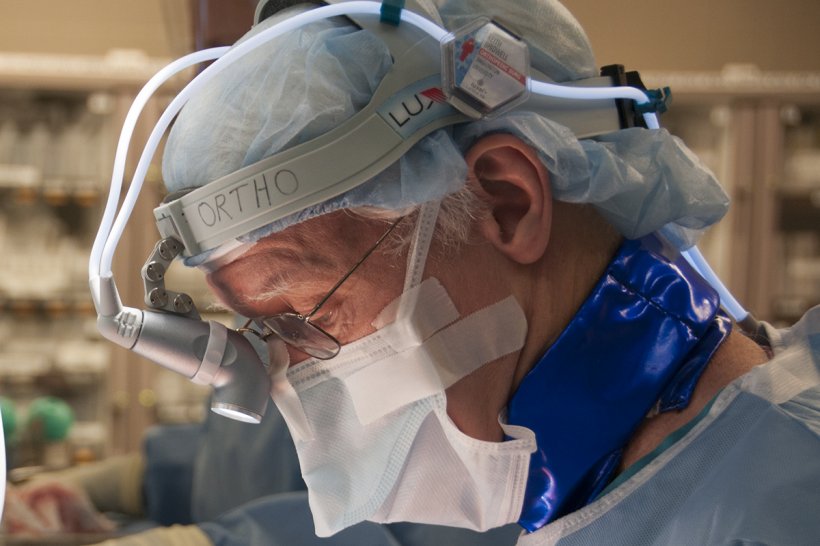 Keith H. Bridwell, MD, a spine surgeon at Washington University School of Medicine in St. Louis, performing surgery to correct scoliosis. With colleague Michael Kelly, MD, Bridwell led a study of adults with lumbar scoliosis and found that the most important factor in determining whether to do surgery is the extent of a patient's disability due to his or her spinal deformity, as well as how much that disability interferes with day-to-day life.

For years, spine surgeons have debated the best methods for treating scoliosis in adults. Spinal curvature often results in more back pain, leg pain and other symptoms for adults than teens because adults also can have degeneration in the discs between vertebrae, and spinal stenosis — a narrowing of the opening for the spinal nerves. Still, there hasn’t been good evidence regarding whether it’s better for adults with scoliosis to have corrective surgery or whether nonoperative treatment, such as physical therapy or nerve injections, is adequate. To help answer that question, doctors at nine centers in North America followed more than 200 adults who had discomfort due to lumbar scoliosis — deformities affecting the lower part of the spine.  The NIH-funded trial ran from 2010-2017 and is the only government-funded study of spinal deformity in adults.

The research effort — led by spine surgeon Keith H. Bridwell, MD, at Washington University School of Medicine in St. Louis — found that surgery usually helped patients improve. It helped correct their curvature, and they had less pain. But the researchers also found that those who didn’t have surgery usually did not go on to experience more severe pain or a more extreme spinal deformity during a two-year follow-up period. In fact, they found that the most important factor in deciding whether to operate was the extent of a patient’s disability, and how much that disability interfered with day-to-day life. “If patients are expecting less pain or better function, they probably won’t see improvement unless they have surgery,” said Bridwell, the study’s senior investigator and the J. Albert Key Distinguished Professor of Orthopaedic Surgery. “On the other hand, if patients have adequate quality-of-life, and the goal is simply to keep them from getting worse, nonoperative treatment probably is fine.”

Some 15 percent of adults in the U.S. have some type of spine deformity, with lumbar scoliosis being the most common. Some adults have had scoliosis since adolescence; others develop the condition as adults. Many don’t experience symptoms, but a significant percentage will develop back pain, leg pain and even lose up to four inches of trunk height — measured from the waist upwards — due to the deformity. “A fair number of doctors have suggested doing surgery before a patient’s condition deteriorates,” said the study’s first author, Michael P. Kelly, MD, an associate professor of orthopedic surgery and of neurological surgery at Washington University. “But we found that, on average, patients are unlikely to rapidly get worse. Those who don’t have severe pain and can easily carry out their daily activities seem to progress slowly and often their symptoms are not severe enough to undergo the risks of surgery.”

Those risks include infection and surgical complications, such as a failure of vertebrae to fuse together, which often means patients will need another operation. The study enrolled 286 patients, with 144 in the nonoperative group and 142 in the operative group. All were symptomatic patients ages 40 to 80 who had at least a 30-degree curve in the lower spine. Their levels of disability were measured with spinal pain and disability surveys. The nonoperative patients were treated with therapies such as physical therapy, anti-inflammatory drugs and injections that deliver pain medications directly to nerve roots along the spinal column. During the study period, 29 of the nonoperative patients changed their minds, or their conditions deteriorated, and they decided to have surgery.

At the end of the study, the average surgery patient had improved. Meanwhile, those who didn’t have surgery were functioning at about the same level after two years, but most had not gotten worse. Kelly and Bridwell said the satisfaction of individual patients with their degree of disability seems to be the best guide for determining whether they should choose to have surgery.

Cartilage cells from the nasal septum can not only help repair cartilage injuries in the knee, they can also withstand the chronic inflammatory tissue environment in osteoarthritis and even…

Fetuses with enlarged ventricles--the fluid-filled cavities inside the brain--may be less likely than their counterparts to benefit from surgery in the womb to treat spina bifida, according to a…