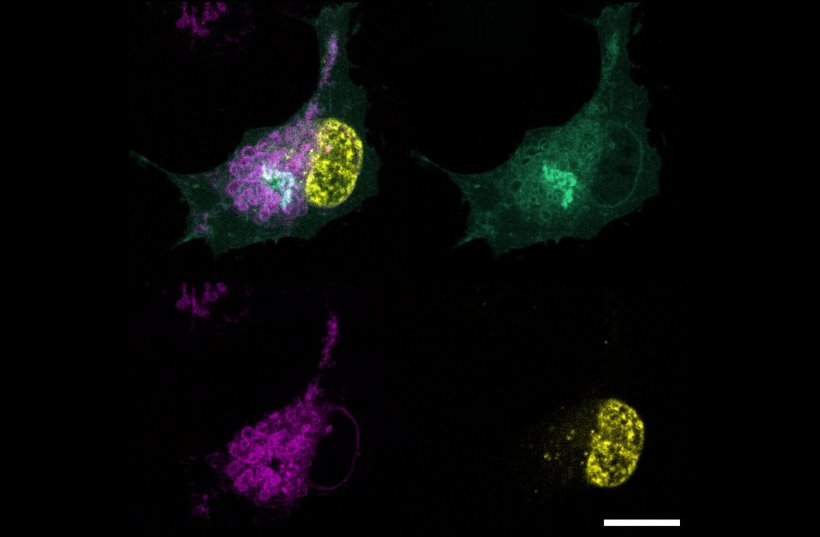 Localization of FSP1 in green, cell nucleus in yellow, endoplasmic reticulum in magenta.

This protein is expressed in a variety of cancer cell lines and therefore represents an attractive drug target for cancer treatment. In fact, the first FSP1 inhibitor described in the researchers’ study published in Nature sensitizes tumor cells to ferroptosis, providing the rationale for the development of stratified combination therapies.

Development of drug resistance to chemotherapy represents a major clinical problem for the treatment of a variety of tumor entities. Metabolic alternations, epithelial to mesenchymal transition and immune evasion are some of the processes involved, which have been recently linked to an acquired sensitivity towards ferroptosis. So-called “persister” cancer cells withstand conventional therapies and lead to tumor relapse. Interestingly, some persister cells are known to develop a strong dependency on glutathione peroxidase 4 (GPX4), the established regulator of ferroptosis. So far, GPX4 has been considered the sole enzymatic system in mammalian cells that can efficiently reduce and thereby detoxify peroxides in phospholipid bilayers by using the tripeptide glutathione, the most abundant natural antioxidant in mammalian cells.

CUP: in search for the smoking gun

Cancer of unknown primary (CUP) can send radiologists on a frustrating scavenger hunt: metastases were detected but the primary cancer is nowhere to be seen. Professor Alwin Krämer, Head of the Clinical Cooperation Unit Molecular Haematology/Oncology at University Hospital Heidelberg and the German Cancer Research Center, explains strategies for dealing with CUP.

In order to unravel novel ways of using ferroptosis for cancer treatment researchers investigated the mystery of why certain cancer cells are resistant to ferroptosis despite expressing ACSL4 – a strong predictive marker for ferroptosis sensitivity (Doll et al Nat Chem Biol 2017). The team of researchers including Dr. Sebastian Doll and Dr. Marcus Conrad, both from the Institute of Developmental Genetics at Helmholtz Zentrum München, as well as Dr. Florencio Porto Freitas and Dr. José Pedro Friedmann Angeli from the University of Würzburg (Rudolf Virchow Center) performed a robust genetic suppressor screen using a cDNA library from a ferroptosis resistant breast cancer cell line. This screen led to the identification of FSP1, previously erroneously annotated as AIFM2 (Apoptosis Inducing Factor Mitochondria Associated 2), as a strong anti-ferroptotic gene.

FSP1 fully complements the loss of GPX4, the hitherto only known enzyme efficiently preventing lipid peroxidation and associated ferroptosis. Determining the biochemical function of FSP1, the researchers found that inhibition of lipid peroxidation depends on the presence of ubiquinone (also known as coenzyme Q10). “The mechanism by which FSP1 protects cells from ferroptosis is unique and novel. FSP1 keeps ubiquinone in its reduced state and by this, ubiquinone protects membranes from radical driven lipid peroxidation. Ultimately, we found that this mechanism prevents the execution signal of ferroptosis,” explains Dr. Friedmann Angeli.

“In a next step, we screened approximately 10,000 drug-like compounds in a phenotypic cell-based screen and target-based validation assay and identified iFSP1 as the first FSP1 inhibitor,” says Dr. Bettina Proneth from the team at Helmholtz Zentrum München. Dr. Sebastian Doll, first author of the study, further states: “Since we found that FSP1 is expressed in most cancer cell lines, novel FSP1 inhibitors have the potential to be further developed as anticancer drugs.”

With this study, the team of researchers described an until now unknown mechanism of how to protect cells from lipid peroxidation induced ferroptotic cell death. Moreover, they showed that this system can provide strong resistance towards known ferroptosis inducing drugs. They further provided an explanation for the long-sought riddle why cells have large amounts of extra-mitochondrial ubiquinone. “This study has widespread implications. It asks for the development of novel and target-based ferroptosis inducers, suggests the development of FSP1 as a biomarker for future ferroptosis-based therapies and seeks the re-evaluation of ubiquinone as a powerful anti-ferroptotic agent,” concludes Dr. Marcus Conrad.

Cancer therapy is often highly effective in the initial phase of treatment, but in many cases the patients’ tumor stops responding. As certain therapy-resistant tumors and those undergoing dedifferentiation evolve into a ferroptosis-sensitive state, pro-ferroptotic treatment paradigms based on inhibition of FSP1, GPX4 or a combination thereof ask to be translated into clinical applications in the future.

Scientists at Sanford Burnham Prebys have found a new way to kill pancreatic cancer cells by disrupting their pH equilibrium. The study, published in Cancer Discovery, reports how depleting an ion…