Inside Pesquet’s space gear were equipment and materials for  two assignments, the Matiss project designed by the French National  Centre for Space Studies (CNES), and the ESA’s EveryWear program.

The   EveryWear tablet computer serves as the data platform for two devices from BodyCap, a start-up based in Caen, France, which collaborated on a zero-gravity study of wearable technology with the CNES laboratory focusing on microgravity science and the Swiss Institute for Space Medicine and Physiology.

A sensor in the e-TACT patch worn by astronaut Pesquet combines activity tracking, skin temperature monitoring and body position detection; data is sent wirelessly in real time or stored on the device for subsequent analysis.The patch can be worn on any body area for some time, monitoring chronic diseases, sleep disorders and overweight people, for example. 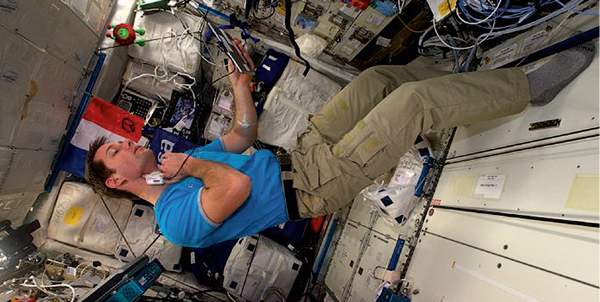 ‘As there is no gravity in the ISS, the astronaut needs to be attached to the bed to avoid drifting around the capsule, which makes it difficult to sleep. What becomes important is an ability to quantify movement during his sleep, as this is a very good indicator of sleep quality, a measure of whether he is truly sleeping or is restless,’ explained Sébastien Moussay MD, a co-founder of BodyCap.

The other device from BodyCap is the Blood Pulse Wave sensor finger-worn device to detect changes in the blood pulse of the carotid artery when the astronaut presses his finger against his neck. This tonometer is being used as part of a study of modifications to astronaut Pesquet’s cardiovascular system during long-term exposure to microgravity.

Without the resistance of gravity, Moussay said, the heart does not need to force blood flow to the brain and it progressively weakens, requiring a period of therapy for recovery once Pesquet returns to earth in May 2017.

The pulse wave sensor is a work-in-progress, Moussay pointed out, but e-TACT is a CE-approved product with down-to-earth medical applications in programs for the obese and diabetic patients where physical activity is a vital measure, as well as for sleep labs. An example is patient compliance to prescribed physical therapy routines in the period following bariatric surgery.

Connected watches and other activity trackers popular with consumers do not make the grade with clinicians, he said. ‘What’s very important for doctors and medical staff is a measurement of metabolic change linked to activities such as walking and swimming. They are less interested in measuring hand movements of someone playing a video game, which is the data provided by connected watches,’ Moussay explained.

The Matiss project is a test of smart surfaces to resist bacterial colonisation inside the spacecraft with an eye on the future.

One never knows where the next good idea for practical applications will come from; perhaps this time it will come down from space.

‘If we are going to send people to Mars, we don’t want them to get sick on the way, nor do we want them scrubbing and cleaning all the time,’ said Guillaume Nonglaton, the project manager for the Matiss experiment at the Grenoble-based Leti research institute.

Housekeeping in the space station takes up an inordinate amount of the astronauts’ time, which could be better spent performing their scientific mission.

Keen housekeeping is a vital task

Astronaut Pesquet installed four plaques in spots regularly frequented by fellow astronauts, such as the kitchen area. Each plaque holds 20 different samples of hydrophobic materials that will be exposed to the air in order to come in contact with water droplets circulating within it, each possibly carrying bacteria.

The sample surfaces were each designed to repel the droplets so that they remain in the air and can be filtered, rather than being absorbed on a surface where they may take root.

Advanced materials developed for the experiment include a fluorinated thin layer, an organic silica and a biocompatible polymer, all chosen for their hydrophobicity, and ability to be manufactured on an industrial scale.

The materials also have practical benefits back on Earth for germ-free medical device surfaces and even elevator buttons.

Nonglaton: ‘One never knows where the next good idea for practical applications will come from; perhaps this time it will come down from space.’

A smart-ring medical device is emerging as an effective and discreet wearable for round-the-clock blood pressure monitoring. Using photoplethysmography (PPG) signals to measure the bloodstream 24/7…

Researchers at the Georgia Institute of Technology have developed a smart stent that can monitor hemodynamic parameters. The wireless and battery-free device can transmit the data to the outside of…