‘Phase-contrast X-ray imaging can be considered one of the holy grails of medical imaging,’ he pointed out. ‘Since the first discovery of X-rays in 1896 by Röngten, scientists have worked very hard to address a fundamental issue: how to increase contrast in soft-tissue while keeping the dose deposition under control? Namely, in conventional X-ray imaging (radiography or CT) as it is performed daily in hospitals, the contrast is essentially determined by the absorption of X-rays in the body – which, as the name suggests, is directly related to the dose deposition.

‘On the other hand, to generate contrast, phase-contrast imaging, exploits refraction and scattering signals from the body. It can be shown that while the absorption signal might be small for a soft-tissue specimen such as the breast, the phase contrast signal can be much larger. Being able to detect such a signal and convert it into an interpretable image might provide a formidable new radiological tool: high soft-tissue sensitivity (so far a prerogative of MRI) at excellent spatial resolutions within a short time, which are typical features of CT scanners.’

Back to the beginning

‘The development of phase sensitive X-ray techniques goes back to the mid-sixties, first with interferometric experiment using crystals. Further, with the advent of synchrotron facilities, X-ray imaging experienced a first revolution, as coherent X-rays were finally in reach. Coherence is the intrinsic property one needs in order to observe interference phenomena which, in the end, allows access to the phase information.

In the last decade we saw the development of many approaches: propagation-based imaging, diffraction enhanced imaging, coherent diffraction imaging, gratings interferometry and ptychography, to cite a few.‘These methods perform phase-contrast imaging at different length scales, from a single cell up to whole organ imaging.’

‘Out of the many techniques developed so far, gratings interferometry seems to be the most promising, with respect to potential clinical applications. This approach, pioneered at the Paul Scherrer Institute in Switzerland, has been proven to work very efficiently on conventional X-ray sources, i.e. without the need of a large-scale facility like a synchrotron. This raised the interest of the medical community, which, as mentioned, is eager to improve soft-tissue differentiation at high-resolution keeping dose under control.

‘Our research aims to develop the technology (hardware/software) to finally bring phase-contrast imaging into hospitals, to improve diagnostic capabilities to benefit the entire population. An ideal entry point for this technology is mammography, a popular radiologic technique to investigate breast tissue. It is well known, also in relation with many active screening programs, that dose delivery is critical issue. It would be of paramount relevance if a technology were to be available that could significantly improve sensitivity to soft-tissue, sharpness as well as lesions delineation and microcalcifications visibility.

‘The identification of microcalcifications is one goal of breast cancer screening and early detection of pre-malignant and malignant lesions. Breast calcifications are common on mammograms, being especially prevalent after menopause. Although they are usually benign, certain morphologic (e.g. fine pleomorphic or fine linear) and distribution (e.g. clustered or segmental distribution) descriptors may indicate breast cancer.’

‘Currently, it looks like mammography is very well suited for a first clinical application of phase contrast imaging. Whether this technology will make it into more complex systems, for instance a human-body CT, still needs to be verified and many teams worldwide are working toward this aim. Further, it has to be pointed out that phase contrast imaging promises to be very useful for applications outside the medical field, for example in non-destructive testing or homeland security.’

‘This is obviously a critical issue, which cannot be answered yet with a comprehensive quantitative statement, because there are no clinically compatible phase-contrast systems available that have been pushed to perform at their physical limits, as is the case, for instance, for conventional, absorption-based instruments. The theory is very promising and the hope is that one day a phase contrast mammography system, with dose constraints within the actual regulation limits and significantly improved image quality, can be deployed to a hospital.’

Advantages and disadvantages over others
The most fascinating aspect of phase contrast imaging is that it should be possible to achieve a significantly improved soft-tissue differentiation compared to conventional X-ray based systems. Being an X-ray technique, it is also supposed to be significantly cheaper and eventually provide a better spatial resolution than conventional MRI. ‘However, phase contrast is based on ionising radiation, and therefore the minimisation of the dose delivered to a patient as well as the delicate balance between such dose and the desired and/or required diagnostic information have always to be taken into account.’

Research results
‘With clinical partners we have contributed to the early period of phase contrast imaging in a clinical environment. For the first time, we presented images of the human breast investigated by this novel technology (outside a synchrotron) and we statistically evaluated the potential impact of such a technology in a diagnostic context. From our studies it appeared clear that sharpness, contrast, lesion delineation and microcalcifications detection are improved. ‘We recently indicated that it might even be possible to discriminate between two types of microcalcifications. If statistically confirmed, this could eventually provide an additional descriptor for a scoring system to improve risk stratification.’

Entering clinical routine
‘Introducing a new technology into clinical routine is notably a long and complicated task. We are confident that our approach will convince the medical community that phase contrast can effectively improve their diagnostic capabilities. If this can be shown on a sufficient large scale and for a wide range of applications, then it should be possible to design, build and certify an instrument, which will make it. ‘As technology developers we must show that this technique can be brought so far that it can be efficiently transferred to a hospital. ‘Then, the radiologists need to assess the capability of this technique and confirm that it indeed provides a significant benefit to their diagnostic process. These are the two fundamental pre-requisites for a successful story.’

PROFILE:
A physics graduate (1998) from ETH Zurich, in 2002 Marco Stampanoni also graduated in synchrotron-based tomographic microscopy. In 2013 he became an associate professor there, focusing on X-ray imaging in the IT and electrical engineering department. Today he is a professor for the Institute of Biomedical Engineering at the University and at ETH Zurich, where he leads the X-ray Imaging and Microscopy Division. At the Paul Scherrer Institute he also heads the Swiss Light Source (SLS) X-ray Tomography group consisting of 19 people – two staff scientists, seven post-docs, eight PhD students, a computer engineer and technician. Dr Stampanoni’s research encompasses phase contrast X-ray imaging and microscopy, real-time tomographic micro-imaging, nanotomography and novel radiological methods for clinical applications and more general non-destructive testing. In 2012 he received an ERC Grant for his phase-contrast X-ray imaging project and he won the Dalle Molle Foundation Award for his pioneering work on X-ray phase-contrast mammography.

In many practices and hospitals the X-ray systems need to be modernised. Increasingly, physicians opt for digital radiography (DR) systems, as did Dr Joachim Münch and Dr Dennis Völker who run an…

At this year's virtual ECR congress, Ziehm Imaging showcases its portfolio of mobile C-arms and advanced imaging solutions. Highlights on display include two clinical packages for cardio and vascular… 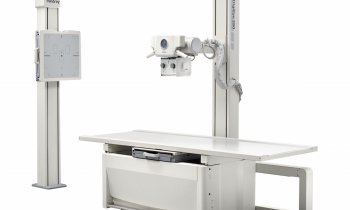