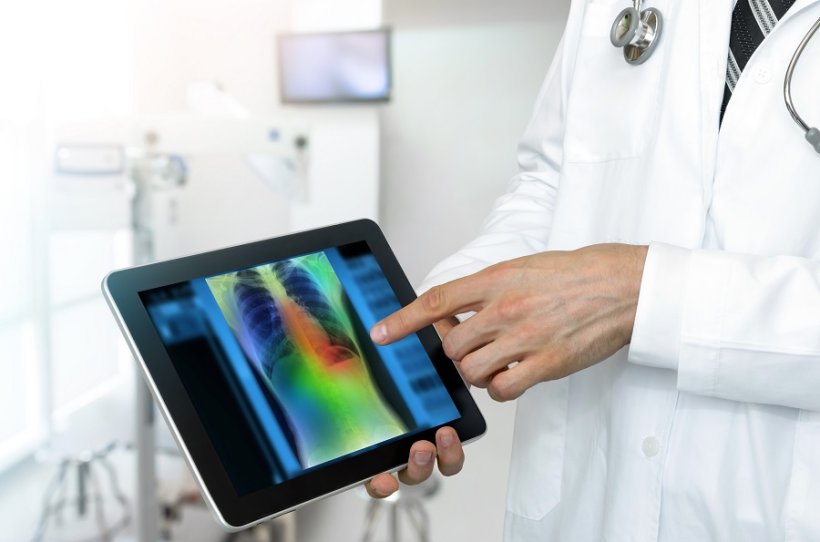 AI in thoracic radiology is well developed, but no specific applications are available for the paediatric population.

There are several challenges with current AI products in radiology, Schalekamp pointed out – one of them being mainly developed for the adult population. The Dutch expert is part of “AI for Radiology”, a non-commercial project at Radboud UMC that tracks all CE-certified AI products in radiology as well as supporting literature and research studies evaluating these algorithms.

To date, 191 AI software solutions with the CE Mark for radiology are listed in the database, with a majority designed for neuroradiology (35 percent). The second largest group is chest radiology, with 57 products from 28 vendors. However, as Schalekamp noted, none of these products were specifically designed for children.

Only one product, CAD4TB, which was developed to automatically detect tuberculosis on chest radiographs, is applicable to paediatric patients. CAD4TB was trained on chest images from children ages four and up. “It's being used in multiple, often low-resource countries where there aren’t many radiologists available,” he said.

Another major challenge for these AI systems is the difference between adult and paediatric thoraxes. Children have a growing chest that is constantly changing. For example, the size and proportions of an infant's chest differ from that of a young adult. There is also greater variability in patient monitoring and inspiratory levels, the radiologist said.

Moreover, in paediatric patients, clinicians are generally looking for different abnormalities than in adults, such as paediatric pulmonary sequestration and congenital pulmonary airway malformations. Schalekamp added that only few large paediatric datasets exist, partially because of less imaging being performed in children due to radiation risks.

The development of AI products in chest radiography is changing, Schalekamp pointed out. “A couple of years ago, most products only were able to detect one or two abnormalities, mainly lung cancer or pneumothorax. Now, products focus on multiple abnormalities and try to assess the whole image. There are even products available, claiming to detect up to 124 abnormalities,” the expert said.

The vendors have different ways of presenting their findings, for example with heatmaps, by drawing circles around suspicious areas or giving abnormality scores of an image. “In the literature, we see that the products get better and better,” he said.

Aside from CAD4TB, other paediatric products are being developed. “In the near future, we can expect some products on pneumonia detection in children, but also detection of lung metastases,” Schalekamp said. “These products are already available for the adult population and could be easily transferred to the paediatric population.”Researchers in South Africa developed CAD4Kids, an algorithm aimed at detecting pneumonia, which still carries a high mortality rate in infants worldwide. The algorithm was trained on a dataset of chest x-rays from children under five years old. The system achieved reasonable sensitivity (76 percent) and specificity (80 percent), but the analysis revealed the system was still inferior to a reference observer, the expert reported.

An international group led by Merck scientists used a World Health Organization dataset of radiographs from 431 children to develop an AI algorithm for detecting severe pneumonia in children. Schalekamp said that the algorithm reached an impressive area under the curve (AUC) of 0.977 and was within the range of interobserver reliability of the reference observers in the study.

There is also a lot of research on the detection and tracking of bronchopathy (cystic fibrosis). Researchers from the University of Bordeaux and the University of Cincinnati in Ohio developed an AI algorithm to help evaluate cystic fibrosis on CT imaging in children based on a dataset of images from patients between the ages of four and 54. “They were able to demonstrate that patients on treatment on follow-up CTs had lower amounts of specific biomarkers, which was easily picked up by this AI system,” Schalekamp said.

For him, another interesting application would be the assessment of neonatal radiographs, the grading of idiopathic respiratory stress syndrome (IRDS) in premature babies, and the detection of lines and tubes in radiographs.

Schalekamp concluded that AI in thoracic radiology is well developed, but no specific applications are available for the paediatric population and that “more research and data is needed.”

More information on the the "AI for Radology" implemention guide here.

Applying the 3 laws of robotics to AI in radiology

Ethical considerations continue to fuel the discussion around artificial intelligence (AI), a panel of experts showed at ECR 2022.

Building artificial intelligence (AI) tools that clinicians and patients can trust, and easily use and understand, are core to the technology being successfully deployed in healthcare settings.