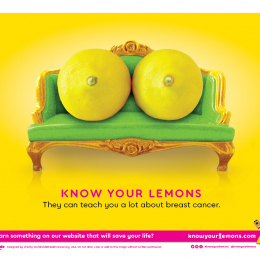 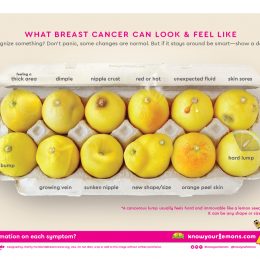 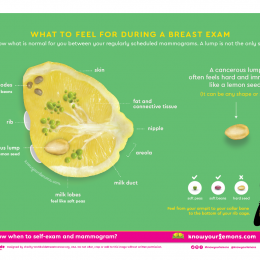 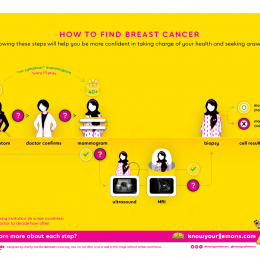 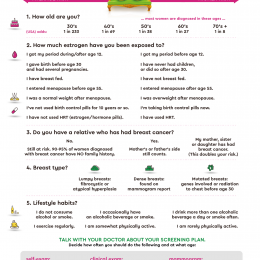 The campaign cuts through all the noise and simply explains what to look for, feel for and… the important steps to take to find it

Know Your Lemons makes breast cancer education simple. Using a clever image of 12 lemons in an egg carton to represent the signs of breast cancer makes it easy for everyone, no matter their race or level of literacy to visualize what to look and feel for without needing to read. "These lemons are pretty powerful", says Corrine Beaumont, PhD., creator of Know Your Lemons and president of Worldwide Breast Cancer. "The campaign can be shown in public without being gory or getting censored, yet it’s incredibly detailed… It cuts through all the noise and simply explains what to look for, feel for and… the important steps to take to find it."

The bright and friendly tone of the campaign combined with the innocence of the lemon allows the image to be displayed publicly, without causing emotional discomfort. These principles allow the images to cross common healthcare communication barriers of literacy, taboo and fear, making it the only truly global breast cancer education campaign.

Combining her background in design and breast cancer expertise, Beaumont founded Worldwide Breast Cancer to change the way people view breast cancer, focusing on education for early detection and treatment. She says, "I knew I had to bravely take the leap to leave my job and pursue the charity full time to help educate as many as I could. And so I turned in my notice and formally started the charity, Worldwide Breast Cancer three years ago."

An innovative collaboration has been formed in the UK between academic researchers and industry to develop a rapid integrated liquid biopsy platform for early detection of recurrent breast cancer.…

Together with Imperial College London (‘Imperial’), molecular diagnostics company DNAe has been awarded a UK Knowledge Transfer Partnership (KTP) by Innovate UK to support development of its next…