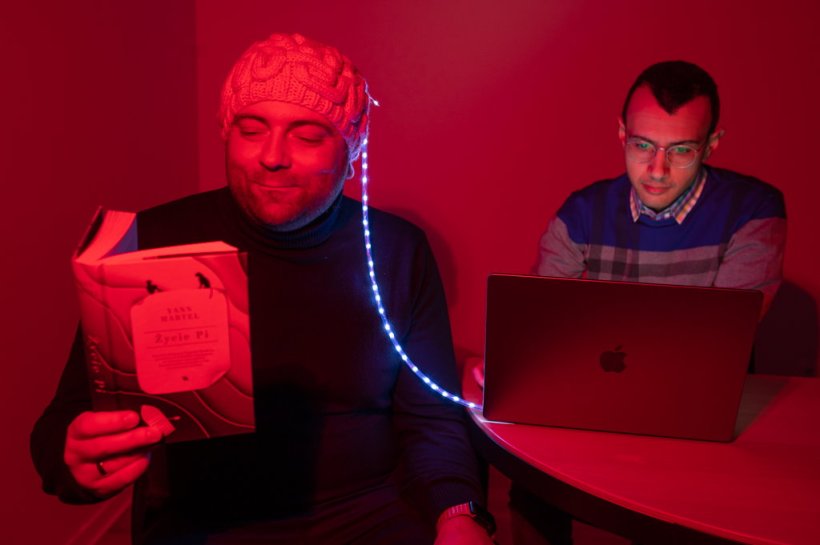 In experiments, a team of researchers (Saeed Samaei, Klaudia Nowacka) led by David Borycki used laser light along with an ultrafast camera to measure blood flow in the brain. The measurements showed that this novel technique, called parallel interferometric (π) NIRS, is sensitive enough to non-invasively analyze prefrontal cortex activation while reading unfamiliar text. This contributes to the development of a non-invasive brain-computer interface.

This is why it is essential to monitor cerebral blood flow in disease prevention and treatment. Neurology knows many effective methods for doing so, but many of them have their weaknesses. Now a team of neuroscientists led by ICTER researchers has developed a technique that can significantly improve the monitoring of cerebral blood flow in vivo. It is described in a paper which appeared in the journal Biomedical Optics Express.

Cerebral blood flow (CBF) uses about 15% of cardiac output to deliver the essential substances (oxygen and glucose) to the brain and take away the unnecessary ones (products of metabolism). Any deviation from the norm can cause temporary brain dysfunction and irreversible trigger diseases, with Alzheimer's disease at the forefront. That's why non-invasive monitoring of CBF is so important - currently, there are several practical tools for doing so.

The first that comes to mind is functional magnetic resonance imaging (fMRI), probably the most widely used diagnostic test in the world, which also works well here. It allows monitoring local changes in brain blood supply and associated fluctuations in neuronal activity in vivo. The technique offers high-resolution images but is quite expensive and difficult to use in young children, for example. This is where optical methods come in, Brain oxygenation can be assessed using functional near-infrared spectroscopy (fNIRS). This technique allows non-invasive measurement of regional cerebral oxygenation by using selective absorption of radiation of electromagnetic waves in the range of 660-940 nm by chromophores in the human body. It is often used as a tool to help monitor a patient's condition, including during neurosurgery.

On the other hand, blood flow can be continuously monitored by diffuse correlation spectroscopy (DCS). Their most advanced modifications are based on continuous-wave (CW) lasers, which prevent absolute measurements. Interferometric near-infrared spectroscopy (iNIRS) can help here. Still, previous studies have shown that this method is too slow to detect immediate changes in blood flow that translate into neuronal activity. This is because it is a single-channel system, which measures the intensity of only the single-mode of the light collected from the sample.

A team of researchers at the Polish International Centre for Translational Eye Research (ICTER) decided to modify iNIRS, relying on parallel near-infrared interferometric spectroscopy (πNIRS) for multi-channel detection of cerebral blood flow. To achieve this, it was necessary to alter the iNIRS detection system. In πNIRS, the collected optical signals are recorded with a two-dimensional CMOS camera operating at an ultrafast frame rate (~1 MHz). Each pixel in the recorded image sequence effectively becomes an individual detection channel. With this approach, it is possible to obtain similar data as with iNIRS, but much faster - even by orders of magnitude. Such an improvement, in turn, translates into greater sensitivity of the system and accuracy of detection itself. It is possible to detect rapid changes in blood flow related to the activation of neurons, for example, in response to an external stimulus or administered drug. The solution could be helpful for diagnosing CBF-related neuronal disorders and evaluating the effectiveness of therapeutic approaches, e.g., for neurodegenerative diseases.

"This project will improve rapid, non-invasive systems for human cerebral blood monitoring in vivo. Continuous and non-invasive monitoring of blood flow could help treat significant brain diseases. In addition, quick detection of cerebral blood flow will bring us closer to developing a non-invasive brain-computer interface (BCI) that could help people with disabilities. Finally, our project will strengthen the tradition of Polish development in diffusion optics", says Dawid Borycki of ICTER.

Tests have confirmed that the technique used effectively monitors prefrontal cortex activity in vivo. Moreover, it can be further improved thanks to the development of LiDAR technology and ultrafast volumetric imaging of the eye, reducing the cost of CMOS cameras. Thus, the πNIRS technique can monitor cerebral blood flow and absorption changes from more than one spatial location. The data obtained by the πNIRS technique can be applied to the diagnosis of cerebral circulatory disorders, which will facilitate the evaluation of the patient's condition and allow the prediction of early and long-term treatment results.