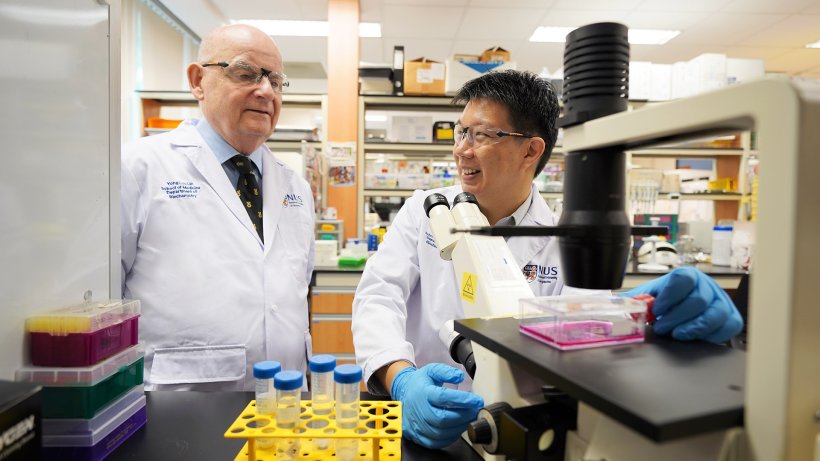 Building upon the results of their earlier studies, Prof Barry Halliwell (left) and Dr Irwin Cheah (right) are collaborating with researchers from the National University Health System to conduct a clinical trial to gather further evidence of ergothioneine’s potential in preventing or delaying cognitive impairment and dementia.

The research teams were led by Professor Barry Halliwell from the Department of Biochemistry under the NUS Yong Loo Lin School of Medicine and Associate Professor Christopher Chen and Dr Mitchell Lai from the Memory, Ageing and Cognition Centre under NUHS. The results of their most recent study were published in the scientific journal Antioxidants.

ET is a unique diet-derived compound discovered more than 100 years ago by Charles Tanret. However, it was only in 2005 when scientists discovered a transporter specific for ET that facilitates the uptake and accumulation of ET in the body. Prof Halliwell and his team demonstrated that ET is avidly retained in the human body following oral supplementation, and in preclinical models, ET is transported to almost all organs, although higher levels can be found in specific cells and tissues such as the blood cells, eyes, liver, lungs, and even the brain.

Earlier work by Prof Halliwell demonstrated the potent antioxidant properties of ET and later its ability to protect cells from a range of different forms of stress and toxins. As its main dietary source is in mushrooms, it was found that increasing consumption of mushrooms such as golden, oyster, shiitake and white button mushrooms is associated with a reduced risk of mild cognitive impairment in elderly Singaporeans.

A study by Prof Halliwell’s team in 2016 showed lower ET levels in blood plasma among participants with mild cognitive impairment. This was verified in a much larger group of cognitively impaired participants with and without dementia, in collaboration with Dr Lai and Assoc Prof Chen. The findings of this study were published in Free Radical Biology and Medicine in 2021. However, evidence of whether a low level of ET in blood plasma can predict the progression of cognitive impairment and dementia was unknown.

The most recent study by the NUS-NUHS research team addresses these gaps in ET research by demonstrating the potential of ET as a predictive biomarker for cognitive impairment and dementia in elderly Singaporeans. In the study, the research team recruited 470 elderly patients and followed them for up to five years at the Memory, Aging and Cognition Centre. The researchers measured ET levels in the blood plasma of the participants and followed their cognitive and functional abilities at different time points. They then examined the link between low ET levels and the risk of cognitive and functional decline over time. "Before this study, there was little evidence that ET levels in the blood can predict the risk of developing cognitive issues. The current study is significant because it measured the ET levels of elderly participants before developing dementia. Our findings demonstrate that if your ET levels are low, your risk of developing cognitive problems increases,” said Prof Halliwell.

The researchers showed that participants with lower levels of ET displayed poorer cognitive performance at the start of the study and an accelerated rate of decline in cognitive and functional abilities over the follow-up period. The team also observed structural changes in the brain seen from MRI (magnetic resonance imaging) scans of the participants, which suggested that the association between a low ET level in blood and cognitive decline was due to underlying disease pathology. These structural changes, including reduced cortical thickness, lower hippocampus volume, and white matter hyperintensities, are characteristic of neurodegenerative disease. “This points to the possibility of using a simple blood test to detect ET levels for early screening in the elderly to identify those who may have higher risk of cognitive decline,” said Prof Halliwell. He added that low ET levels are also associated with a number of other age-related diseases such as frailty, cardiovascular disease and macular degeneration, so ET may have a more general role in maintaining health.

If the deficiency in ET is leading to an increased risk of cognitive decline, then we would have the potential to intervene

Based on this study, which showed that plasma ET levels in the blood can be a predictive biomarker for the risk of cognitive and functional decline, the research team hopes to gather further evidence of ET’s preventive and therapeutic potential through a double-blinded placebo-controlled clinical trial.

For this clinical trial, the team is currently recruiting volunteers who are patients over the age of 60 years with mild cognitive impairment to participate. The researchers will provide study volunteers with either pure ET supplements or a placebo over a specified period to assess the effect and causal relationship of ET supplementation on elderly patients with mild cognitive impairment. "If the deficiency in ET is leading to an increased risk of cognitive decline, then we would have the potential to intervene, and that is what we are trying to find out by undertaking this clinical trial," said Dr Irwin Cheah, Senior Research Fellow from the NUS Department of Biochemistry.

Despite being interrupted abruptly by the Covid-19 pandemic, the team still managed to restart the clinical trial recently and pick up the progress where they left off. Through this clinical trial, the team hopes to understand further the potential preventive and therapeutic capabilities of ET in preventing or delaying cognitive impairment and dementia.

Researchers at the DZNE and the University Medical Center Göttingen (UMG) have identified molecules in the blood that can indicate impending dementia. Their findings, which are presented in the…