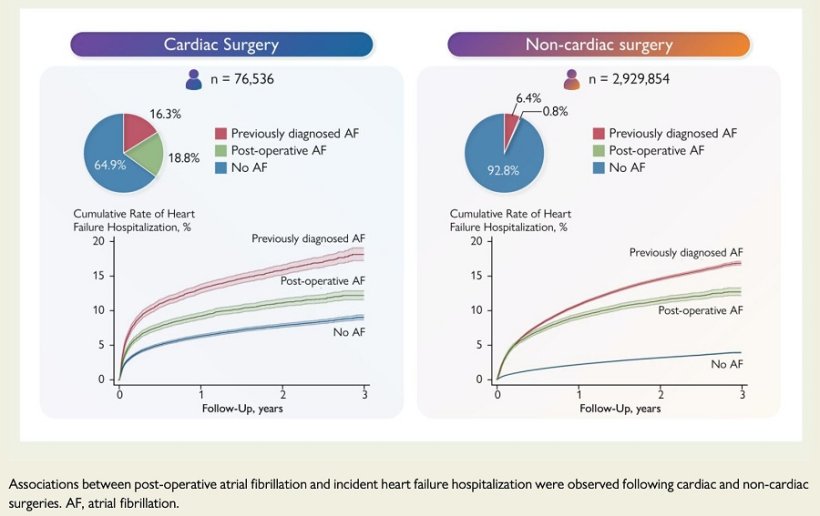 An abnormal, often rapid heart rhythm is known as atrial fibrillation (AF), and the study showed that the risk of hospitalization for heart failure among patients who developed AF after surgery increased regardless of whether or not the surgery was for a heart condition.

The first author of the study, Dr. Parag Goyal, Associate Professor of Medicine in the Weill Department of Medicine at Weill Cornell Medicine, New York, U.S., said, "Our study, which to our knowledge is the largest study to date, shows that post-operative atrial fibrillation is associated with future heart failure hospitalizations. This could mean that atrial fibrillation is an important indicator of underlying but not yet detected heart failure; or it could mean that atrial fibrillation itself contributes to the future development of heart failure. While this study could not specifically address which of these mechanisms are at play, our hope is that this study will inspire future work into exploring the underlying mechanism seen in our important findings.

"Regardless of the mechanism, our study shows that post-operative atrial fibrillation is clearly an important entity that merits attention and incorporation into decision making. Most importantly, patients and doctors need to be more vigilant about heart failure symptoms among patients who develop post-operative atrial fibrillation. Those who do develop the condition may require more aggressive treatments for other risk factors for heart failure, such as high blood pressure, diabetes and narrowing of the arteries."

Post-operative AF occurs in up to 40% of patients undergoing heart surgery and 2% of patients undergoing non-cardiac surgery. Doctors have tended to view it as a benign event, triggered by the stress of the surgery. However, evidence is emerging that post-operative AF is linked to longer term problems such as stroke and death from any cause, although, until now, there has been limited evidence regarding its association with subsequent heart failure.

For the current, retrospective study, the researchers collected data on health claims from 2016 to 2018 for discharges from acute care hospitals across 11 states in the U.S.. Patients were aged over 18 and they were followed up for an average (median) of 1.7 years. The researchers adjusted their analyses to account for factors that could affect the results such as age, sex, race, insurance status, medical history and body mass index.

The strength of this study is its large size. Limitations include the fact that it is an observational study, and therefore, cannot prove that post-operative AF causes heart failure, only that it is associated with it. The study relies on administrative claims data and medical codes to identify medical conditions; it lacks more detailed information like management strategies for post-operative AF, and on the function and size of the left ventricle, which could affect the likelihood of developing AF.

The researchers hope to conduct further studies to understand the underlying mechanism and to investigate ways of preventing future hospitalizations for heart failure among patients who develop post-operative AF.

In the conclusion to the paper, the researchers write, "In the meantime, clinicians should be aware that POAF [post-operative AF] may be a harbinger of HF."

In an editorial to accompany the paper, Dr. Melissa Middeldorp and Professor Christine Albert, both from the Smidt Heart Institute at Cedars-Sinai, California, U.S., write, "These data add to a growing body of literature suggesting that POAF is not just a transient response to surgery but may be reflective of underlying atrial and myocardial structural changes that not only predispose to the acute AF event but to other potentially related adverse cardiovascular events, such as HF hospitalization."

They write that more information and a better understanding of the mechanisms involved in placing people at greater risk of AF and post-operative heart failure is needed in order to reduce hospitalization and deaths after surgery. This will require further studies.

"With a greater understanding of patients' full risk factor profile, we may advocate for early aggressive intervention at the initial manifestation of POAF, to improve outcomes and reduce rehospitalization following cardiac and non-cardiac surgery," they conclude.

The study was published in the European Heart Journal.

The most deadly global health crisis in a century has resulted in a substantial decline in overall heart surgery volume and an unexplained increase in deaths after coronary artery bypass grafting,…

New research at the University of Leicester, funded by the British Heart Foundation (BHF), could change the way people living with a debilitating heart condition are treated. The £2.7m clinical…