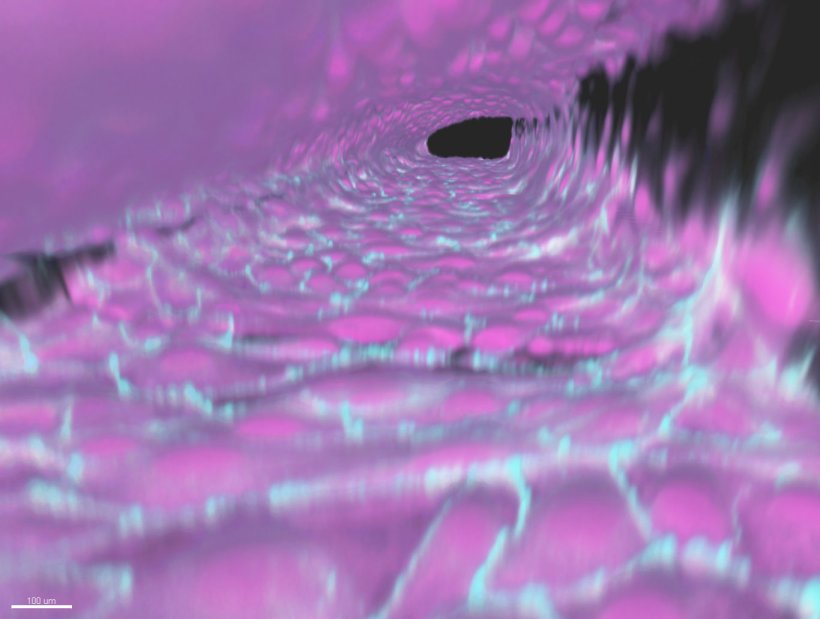 3D-reconstruction of an artificial brain vessel by fluorescence microscopy. Each vessel consists of single endothelial cells (magenta) that are closely connected to each other by so called tight-junctions (turquoise).

This analytical technique allows to study in the laboratory whether new drug candidates  have a realistic chance of reaching the brain. To do this, a team led by Dr. Philip Denner and Dr. Eugenio Fava employs human stem cells and microcapillaries that mimic brain vessels of the so-called blood-brain barrier. The technique is specifically designed for anti-inflammatory agents.

The researchers published their findings in the journal Biomaterials.

To prevent harmful substances or pathogens from entering the brain from the blood stream, the blood vessels of the brain are lined with so-called endothelial cells that form the blood-brain barrier. “You can think of this layer of cells as a filter designed to protect the brain from hazards. It’s like the situation at a high-security area that not everyone is allowed into,” explains Dr. Eugenio Fava, a researcher at DZNE’s Bonn site and head of “Core Research Facilities & Services,” a central unit that provides scientists with state-of-the-art measurement technologies. “Drugs against brain diseases must therefore be tailored so that they can cross the blood-brain barrier and thus act in the brain.”

Treating diseases such as Alzheimer’s or Parkinson’s is a challenge because drugs have to be able to cross the blood–brain barrier. As a result, the doses administered must be high and only a small fraction reaches the brain, which can lead to significant systemic side effects.

Permeability testing therefore play a central role in the development of drugs for treating brain diseases. Such analyses aim to identify promising substances in the laboratory long before clinical trials in humans occur. It is at this early stage of drug development that the method devised by the Bonn researchers comes into play. “We think that our approach recreates the blood-brain barrier better than many techniques currently in use. This enables more realistic predictions of drug uptake by the brain,” Fava says. “Our method is specifically tailored to anti-inflammatory agents. This is our focus, because in recent years, inflammatory processes were found to play a significant role in neurodegenerative diseases such as Alzheimer’s."

The DZNE researcher sees application potential for the new screening method both in science and in the pharmaceutical industry: “The use goes beyond permeability tests of pharmaceutical substances. Some brain diseases compromise the blood-brain barrier. With our model system, you can replicate and study such pathological processes at the boundary between the bloodstream and the brain.”

The method essentially involves two stages. First, the compound to be tested is passed in aqueous solution through a technical device that mimics the filtering function of the blood-brain barrier. Subsequently, a sample is taken from behind the filter and examined to determine whether the compound has passed through the barrier. For this, the extracted fluid is put on a cell culture of human white blood cells. “These immune cells serve as sensors,” explains molecular biologist Dr. Sven Fengler, who played a key role in developing the new screening method. ”If the fluid derived from our filter apparatus contains anti-inflammatory substances, the immune response of the white blood cells will be reduced. If the compound is absent, there is no reduction of the immune response detectable.”

Since an assay based on immune reactions is used at this point, the screening technique is oriented toward anti-inflammatory compounds. However, the heart of the Bonn researcher`s approach is the “filter device”, which in principle is also suitable for permeability tests of other types of compounds. “This was our initial aim from the beginning and during the developmental process”, Fengler says.

An essential component of the hardware are special plastic plates, about hand-sized, which are commercially available for experiments with tiny amounts of liquid (“microfluidics”). These plates are traversed by a network of hair-thin pipes. In some parts of this channel system, the DZNE scientists introduce endothelial cells that cover the inner walls of the capillaries with a dense layer of cells. This way, vessels are created that mimic human brain blood vessels. The endothelial cells used for this purpose are derived in advance from reprogrammt human stem cells: cellular “all-rounders” that – suitably conditioned – can transform into a wide variety of cell types.

About four years of research have gone into the process for generating the artificial brain vessels. In combination with the prefabricated microfluidic plates, the protocol enables such vessels to be created in a standardized and reproducible quality. “Our artificial vessels form a model of the human blood-brain barrier that is quite close to the real thing. This is reflected by measurements of the electrical resistance of the endothelial layer, from which the sealing of this barrier can be assessed, and various other characterizations. It is also significant that our setup keeps the fluid within the vessels in motion to simulate blood flow,” Fengler says.

The scientists can create 40 such vessels per plate, address them individually and thus test 40 compounds simultaneously. A test run takes around two weeks, including preparations, because for each trial the artificial brain vessels have to grow anew in an initially “naked” plate. For measuring permeability, it is crucial that each of the channels in which the vessels grow is connected locally to another channel that does not contain endothelial cells. A special gel is introduced into the bottleneck between the channels. In the area of contact, the endothelial cells present in only one of the channels thus rest directly on the gel. “This gel, on the one hand, seals the capillaries and, on the other hand, allows chemical substances that penetrate through the layer of endothelial cells to then diffuse further into the other channel. This corresponds to the situation where these substances enter the brain,” Fengler says.

By now, the DZNE scientists have successfully tested the new method on various reference compounds. “Our method is quite elaborate and therefore trimmed for precision. So it’s not about high throughput, but about what is known as high-content screening. We see potential applications when it comes to identifying, from a reduced number of pre-tested drug candidates, the one that has the best chance of reaching the brain in sufficient quantity,” says Philip Denner. “We now aim to further optimize our approach and, in the long term, perhaps develop it into a marketable process.”

How diseased blood vessels 'talk' to the brain

An international team has for the first time demonstrated that nerve signals are exchanged between clogged up arteries and the brain. 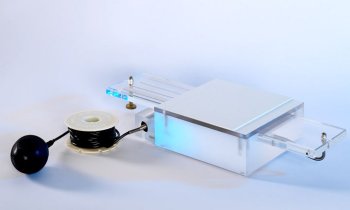