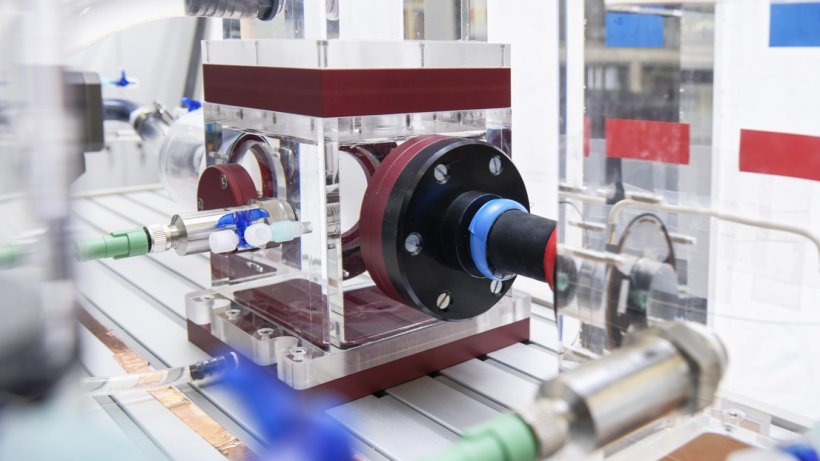 Our aortas are naturally elastic. They expand as blood is pumped into them from the heart’s left ventricle, and then contract to distribute the blood to the rest of the body. But in patients suffering from diseases such as heart failure, the heart has to work harder to accomplish this cycle. To ease the burden on the heart, EPFL engineers have designed an artificial aorta made of silicon and a series of electrodes. Their device is implanted just behind the aortic valve and amplifies the aorta’s efforts, working like an “augmented aorta.” When an electric voltage is applied to the device, the artificial aorta expands to a diameter that’s larger than the natural aorta. “The advantage of our system is that it reduces the pressure on a patient’s heart. The idea isn’t to replace the heart, but to assist it,” says Yoan Civet, a Scientist at the LAI.

To validate their system, the engineers built a simulator consisting of pumps and chambers that replicate the blood-flow and pressure conditions within a human heart. “By testing our device on the simulator, we were able to reduce the amount of cardiac energy required by 5.5%,” says Civet. The research team now plans to conduct further tests of their artificial aorta, and are already working on a new design that delivers better performance.
However, the real challenge lies in the manufacturing step. “We started from scratch and had to develop a new production process that would allow us to increase the volume of the silicone tube. We also had to overcome a problem of electric breakdown. Due to our multi-layer design, only half as affordable electric field was reached as compared to a single-membrane system. We had to troubleshoot the problem and then come up with a solution,” says Civet. The research team has filed a patent for their technology. The hope is that their discovery can be used to treat other medical conditions, such as urological disorders, that require a similar approach.

Researchers have identified a new test that can be used to predict the likelihood of a patient developing heart failure, or even dying following a heart attack.

Routine clinical use will take another decade

Numerous cardiac muscle cells die following myocardial infarction, due to reduced blood flow in the affected muscle areas. What remains is a scar, which also mechanically affects cardiac pumping. The…