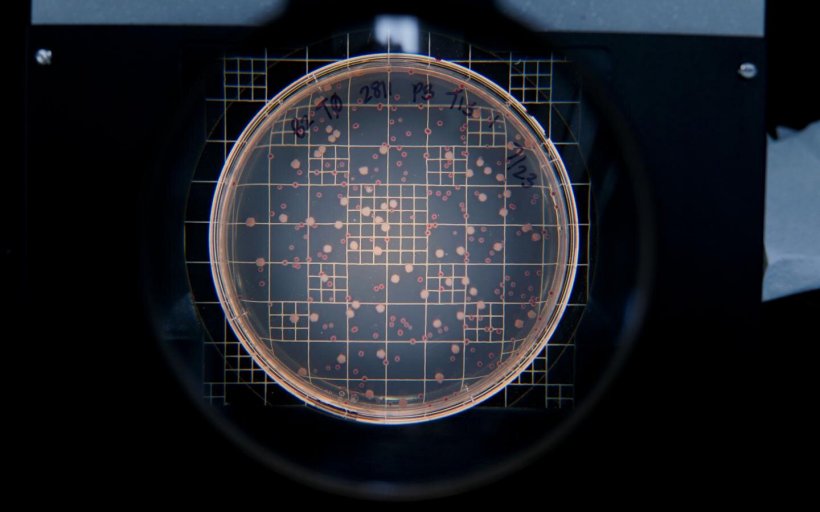 After competing in flasks, different strains of bacteria are moved to agar plates where researchers can evaluate the "winner" by counting numbers of those that survived. Bacteria are identified with red and white markers.

The threat of antibiotic resistance rises as bacteria continue to evolve to foil even the most powerful modern drug treatments. By 2050, antibiotic resistant-bacteria threaten to claim more than 10 million lives as existing therapies prove ineffective. Bacteriophage, or "phage," have become a new source of hope against growing antibiotic resistance. Ignored for decades by western science, phages have become the subject of increasing research attention due to their capability to infect and kill bacterial threats.

"Antibiotic resistance is inherently an evolutionary problem, so this paper describes a possible new solution as we run out of antibiotic drug options," said Borin. "Using bacterial viruses that can adapt and evolve to the host bacteria that we want them to infect and kill is an old idea that is being revived. It's the idea of the enemy of our enemy is our friend."

The idea of using phages to combat bacterial infections goes back to the days prior to World War II. But as antibiotic drugs became the leading treatment for bacterial infections, phage research for therapeutic potential was largely forgotten. That mindset has changed in recent years as deadly bacteria continue to evolve to render many modern drugs ineffective.

Borin's project was designed to train specialized phage to fight bacteria before they encounter their ultimate bacterial target. The study, conducted in laboratory flasks, demonstrated classic evolutionary and adaptational mechanisms at play. The bacteria, Meyer said, predictably moved to counter the phage attack. The difference was in preparation. Phages trained for 28 days, the study showed, were able to suppress bacteria 1,000 times more effectively and three- to eight-times longer than untrained phage.

"The trained phage had already experienced ways that the bacteria would try to dodge it," said Meyer. "It had 'learned' in a genetic sense. It had already evolved mutations to help it counteract those moves that the bacteria were taking. We are using phage's own improvement algorithm, evolution by natural selection, to regain its therapeutic potential and solve the problem of bacteria evolving resistance to yet another therapy."

The researchers are now extending their findings to research how pre-trained phages perform on bacteria important in clinical settings, such as E. coli. They are also working to evaluate how well training methods work in animal models.

UC San Diego is a leader in phage research and clinical applications. In 2018 the university's School of Medicine established the Center for Innovative Phage Applications and Therapeutics, the first dedicated phage therapy center in North America.

"We have prioritized antibiotics since they were developed and now that they are becoming less and less useful people are looking back to phage to use as therapeutics," said Meyer. "More of us are looking into actually running the experiments necessary to understand the types of procedures and processes that can improve phage therapeutics."

‘Why not take a risk?’ belief boosts antibiotic overuse

Antibiotics are mostly prescribed for acute respiratory infections (ARIs), yet most of these infections are viral. A new study shows that inappropriate antibiotics prescriptions are widespread,…

Experts predict that without intervention, the problem of multidrug-resistant bacterial infections could be catastrophic by 2050, killing nearly 10 million people each year.