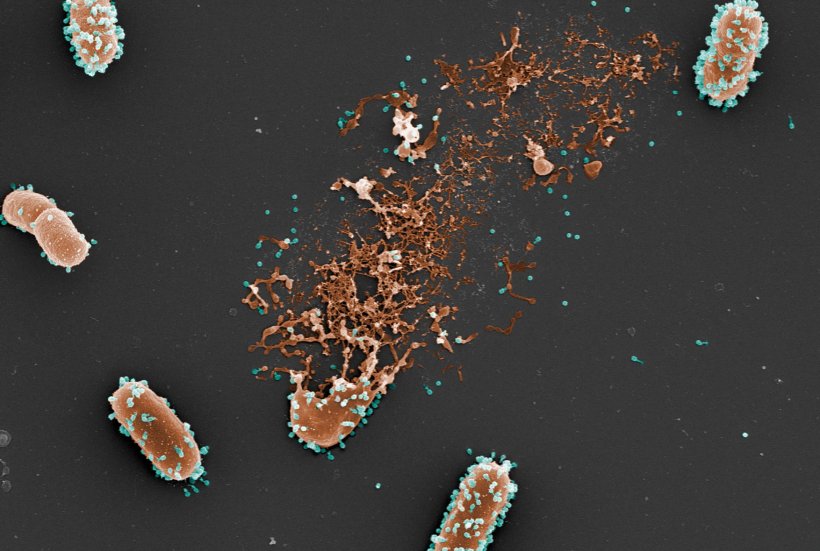 Photo (colorized) of scanning electron microscopy of a bacterium lyzed by the phages.

To overcome them, researchers from Inserm, Université Sorbonne Paris Nord and Université Paris-Cité at the IAME Laboratory, in close collaboration with their counterparts at Institut Pasteur and the Paris Public Hospitals Group (AP-HP), have developed a model to better predict the efficacy of phage therapy and possibly develop more robust clinical trials. Their findings have been published in Cell Reports.

Climate change and antimicrobial resistance (AMR) are forming an alarming alliance: Global warming creates new breeding grounds for resistant bacteria. A serious and very real threat to public health – but not quite the doomsday scenario some might make it out to be, says Prof Sabiha Essack from the University of KwaZulu-Natal in Durban, South Africa.

The discovery of antibiotics had revolutionized the history of medicine in the 20th century, allowing us to effectively fight bacteria for the first time. However, antibiotic resistance – a phenomenon during which bacteria become resistant following mass, repeated use – has become a major public health issue in recent decades. Each year, these resistant bacteria are estimated to be responsible for 700,000 deaths worldwide. Yet the discovery of new antibacterial agents has been stagnating for several years.

In this context, phage therapy has recently generated renewed interest. This therapeutic approach involves the use of bacteriophages that target and destroy pathogenic bacteria whilst being unable to infect humans. While the concept has been in existence for a long time, its clinical development has been hampered by various limitations. Unlike “conventional” medicines, bacteriophages are complex biologics, whose action in the body, optimal dose, and most effective route of administration are difficult to study and anticipate. In order to remove some of these obstacles, Jérémie Guedj’s research team at Inserm, in collaboration with Laurent Debarbieux’s team at Institut Pasteur, has developed a new mathematical model to better define the interactions between bacteriophages and pathogenic Escherichia coli bacteria in animals and to identify the key parameters that influence the efficacy of phage therapy.

Beyond phage therapy, the model could also be used to test anti-infective therapies based on the association between bacteriophages and antibiotics

Various data from in vitro and in vivo experiments were used to construct this model. In particular, the researchers used the bacteriophages’ infection parameters determined in the laboratory (for example, the duration of the infectious cycle of the bacteria, the number of viruses released when a bacterium is destroyed…) and information collected during experiments using a mouse model of lung infection.

Some of the animals were infected with a bioluminescent strain of E. Coli (in order to best monitor it within the body). Among them, some were treated with bacteriophages at different doses and using different routes of administration. The quantities of bacteria and bacteriophages thus measured over time helped to feed the mathematical model and test which were the most important parameters for effective phage therapy. Using their model, the scientists show that the route of administration is an important parameter to consider when it comes to improving the animals’ survival: the more rapidly it brings the bacteriophages into contact with the bacteria, the more it is effective. In the animal model, the phage therapy administered intravenously was therefore less effective in comparison with the intratracheal route because fewer bacteriophages were reaching the lungs. On the other hand, when administered by intratracheal route, the model suggests that the dose of the medication given has little effect on the efficacy of the therapy.

Another important point is that this model incorporates data on the animals’ immune response in the context of phage therapy. The model confirms and extends the principle that bacteriophages act in synergy with the immune system of infected animals, enabling more effective elimination of pathogenic bacteria. “In this study, we propose a new approach to streamline the clinical development of phage therapy, which otherwise continues to have its limitations. Our model could be reused to predict the efficacy of any bacteriophage against the bacteria it targets, once a limited number of in vitro and in vivo data are available on its action. Beyond phage therapy, the model could also be used to test anti-infective therapies based on the association between bacteriophages and antibiotics,” concludes Guedj.

Researchers have designed and synthesized analogs of a new antibiotic that is effective against multidrug-resistant bacteria, opening a new front in the fight against these infections.