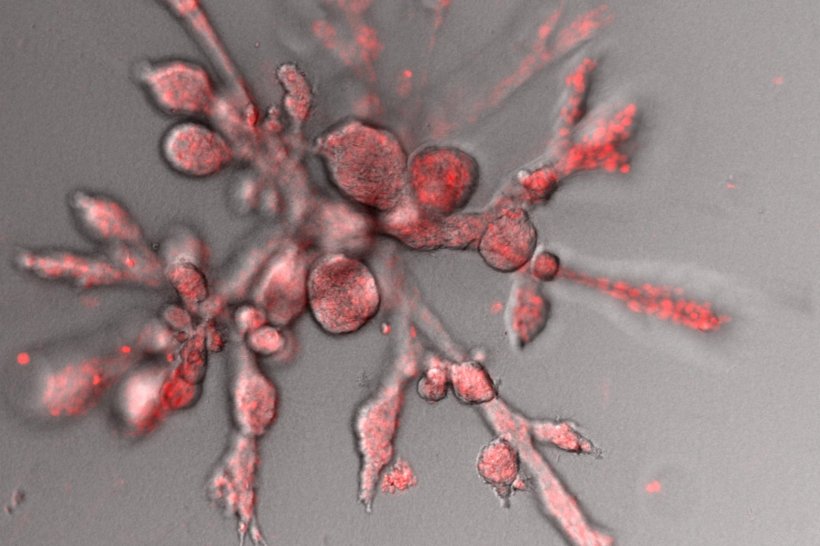 Many of the organ systems found in animals exhibit highly complex structures, which are essential for their various functions. How such structures develop during embryonic development is a central question in biology. Physicists led by Erwin Frey (Professor of Statistical and Biological Physics at LMU Munich) and Andreas Bausch (Professor of Cellular Biophysics at the Technical University of Munich) investigated this fundamental problem using mini-organs termed organoids as their experimental system. The team focused on the spherical ‘alveoli’ in which the ducts of the lactating mammary gland terminate. The study demonstrated in detail that these alveoli form according to the same principles as droplets in a jet of water emerging from a hose.

The research team published their insights in the journal Nature Physics.

The experimental work was carried out in Bausch’s laboratory and used mammary-gland organoids grown in culture from excised human tissue. Organoids are three-dimensional model systems that exhibit many of the physiologically relevant properties of the organ from which they originated. Thus, mammary-gland organoids form ducts that branch into clusters of smaller tube-like structures, each of which ends in a spherical sac or alveolus. This architecture is typical of the lactating human mammary gland, but it is also found in many other organs including the lung. Bausch and his group succeeded for the first time in following the growth dynamics of the mini-organs over several days via time-lapse microscopy. In addition, they investigated the micromechanical response of the developing tissue to the localized, laser-induced ablation of cells.

Using this strategy, the researchers were able to link the formation of the spherical alveoli to a change in the direction of movement of the cells in the developing tissue. The cells in each tubule are constantly in motion, pulling on their immediate neighbors. At first, they collectively migrate back and forth along the walls of the tubules. “But at some point, the cells at the tips of the tubules begin to follow a rotational course. This change in behavior, associated with the interactions between neighboring cells, then propagates posteriorly until all the cells near the tip of a branch begin to rotate as a collective,” says Andriy Goychuk, a member of Erwin Frey’s research group and joint first author of the publication. His colleagues Pablo Fernandez and Benedikt Buchmann in Andreas Bausch’s group, who performed the ablation experiments, explain what happens as follows. “The cells no longer exert the same force in all directions, which results in an alteration in their trajectories. While the cells that alternate between forward and backward movement exert more force in the direction of the axis of the tube than around its circumference, that is no longer the case for the cells that follow a rotational course. Thanks to the greater tensile stress along the circumference, the tip of each tube develops into a spherical protrusion.”

According to the authors, the mode of formation of the spherical protrusions is analogous to the mechanism that is responsible for the formation of drops in a water jet. Like the cells in the developing organoid, the surface of the water jet is under tension. All objects that are subjected to a tensile force try to minimize their surface. Since the surface area of a sphere is less than that of a cylinder, the water jet breaks up into discrete droplets – and in the mammary-gland tissue, the rotation of the leading cells alters the balance of forces in the tubular branches in such a way that they become unstable, as in the case of the water jet, and form spherical protrusions. “This theoretical model provides an important framework for the analysis of more complicated geometrical transformations in biological tissues – such as those that occur during the development of the salivary glands, the pancreas, the kidney and the lung,” says Frey.

Can mice really mirror humans when it comes to cancer?

A new Michigan State University study is helping to answer a pressing question among scientists of just how close mice are to people when it comes to researching cancer. The findings, now published…

Ambiguity calls for a second opinion

Each year, approximately 1.6 million women in the USA have breast biopsies to diagnose or rule out cancer. Pathological diagnosis is considered the gold standard – how accurate are these…

Breast cancer is the most common form of cancer in women. Evaluation of the axillary lymph nodes is essential to insure complete cancer removal. Fluorescence imaging instead of radioisotopes is an…