The company is better known for smartphones and tablet computers, but since acquiring the ultrasound platform of Medison two years ago, Samsung has increased its footprint in radiology step-by-step.
This year at RSNA was a big step with an expanded exhibition space and ubiquitous marketing with a prominent promotion of the company logo both inside McCormick Place and outside on the hundreds of shuttle buses ferrying RSNA participants around Chicago.
At the heart of the Samsung exhibition at RSNA is the Vision 2013 showcase, which according to Dominica Kim, Product Manager in Samsung Research & Development, demonstrates how Samsung is applying its synergies for product development.
With UX/UI, or user experience, user interface, Samsung is bringing the same forward-feeling design experiences that distinguished its products in telecommunications and computing.
The 'wow factor' in the space are 3D renderings of ultrasound images such as vasculature in the liver, that are more intuitive and exciting than MRI when viewed through 3D glasses on a Samsung wide screen monitor.
This application touches on a critical component of the Samsung vision for medical imaging, which is its pioneering work in 5D ART, technology for advance viewing of large field views that takes ultrasound from fuzzy to brilliantly sharp.
“Our goal is MR-like quality using ultrasound technology,” said Kim.
Another new feature under development is SDMR evo, that roughly stands for Samsung Dynamic MR evolution, and hints at this wider strategy for filtering ultrasound to reduce speckle, enhance edge and contrast, and reconstruct the data in astonishing 3D renderings.
Another component in the Samsung Vision is Smart Technology where the company is progressively focusing its firepower for software development to boost capabilities with features that extract and connect information.
Product development manager Kim showed a series of 'smart' applications Samsung had rapidly developed and rolled out to distinguish its medical imaging offer.
The Smart Image Engine for X-Ray is a post-processing technique that treats even routine chest x-rays as data sets rather than images. Using enhancement of contrast and dynamic range, white-out artifacts can be clarified to reveal structures.
The i-DEB feature for ultrasound mammography is a term of uncertain origins, perhaps meaning something like database enhanced breast imaging to avoid saying computer assisted detection. Using shape recognition of potential tumors, forms and tell-tale characteristics of lesions can be categorized to suggest a classification for the tumor, speeding the workflow, and perhaps the accuracy.

The joint practice of Drs. Ulrike and Dieter von der Burg in Münster, Germany, decided on the GU60 digital X-ray system by Samsung Health Medical Equipment (HME) and is very pleased with the image…

Visiorad is an association of radiology, radiotherapy and nuclear medicine practices which serve the northwestern part of Hamburg and the adjacent suburban areas. Dr Timo Gomille, partner of… 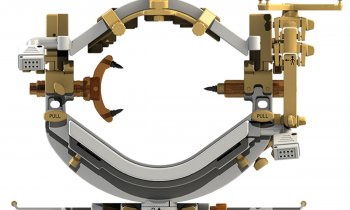