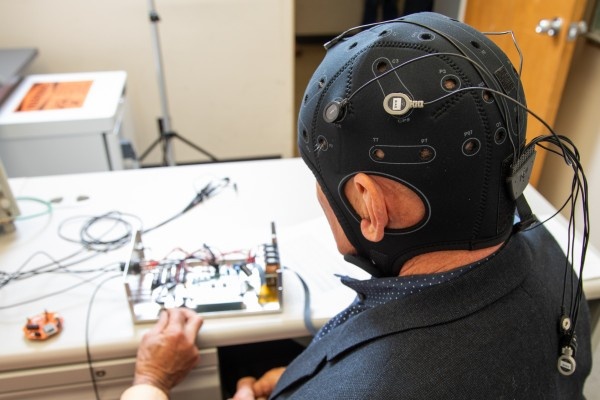 Researchers at SLAC and Stanford are developing a new device that could be used in non-invasive therapies that aim to bring back lost brain function through electrical stimulation of the brain.
Dawn Harmer/SLAC National Accelerator Laboratory

“The device works similar to radar, which sends out electromagnetic waves and passively listens for the weaker reflected waves.”

A device under development at the Department of Energy’s SLAC National Accelerator Laboratory and Stanford University could help bring back lost brain function by measuring how the brain responds to therapies that stimulate it with electric current. The approach could open new avenues for treating brain disorders and selectively switching brain activities on and off, says Anthony Norcia, a professor of psychology at Stanford who initiated the project.

Neurostimulation via electrodes placed on the scalp shows a lot of promise, but its immediate effects are hard to study because the brain’s neural response gets easily swamped by the million times stronger pulses that researchers send into the brain. To detect the much fainter brain response, scientists had to monitor brain waves and behavioral response in separate sessions before and after stimulation. The new device measures brain waves at practically the same time the stimulus is applied, potentially establishing a much better link between the two. “The device works similar to radar, which sends out electromagnetic waves and passively listens for the weaker reflected waves,” says SLAC senior scientist Christopher Kenney. “Here, we send electrical pulses into the head via the electrodes of an EEG monitoring system, and in the time between those strong pulses we use the same electrodes to pick up the much weaker electrical signals from inside the head.”

Our brain is an intricate network of hundreds of billions of neurons, and anything that interrupts this network, such as abnormal brain development or a stroke, can cause severe disorders, including epilepsy, depression, anxiety, visual impairment, chronic pain and paralysis. Stimulating brain tissue alters the way neurons fire and helps the brain form neural connections. Norcia’s research focuses on applying the method to cases of visual impairment, such as amblyopia (lazy eye) and strabismus (crossed eyes), and on better understanding phenomena like binocular rivalry, which describes the fact that when presented with two different images at the same time, we can only be aware of one at a time.

Norcia’s group develops models that describe how electrical activity from the brain’s visual centers radiates to the scalp, where it can be picked up and measured by an EEG. They also develop models for delivering electrical pulses to specific locations in the brain, where they alter brain function associated with vision. “Our models give us a pretty good idea for how to design an array of electrodes to reach specific volumes inside the head,” Norcia says. “But we also want to be able to ‘listen’ to the brain’s response at the same time to figure out whether an applied stimulus had the desired effect.” Doing so simultaneously isn’t possible with today’s clinical EEG systems, but that may soon change thanks to the collaboration with SLAC. 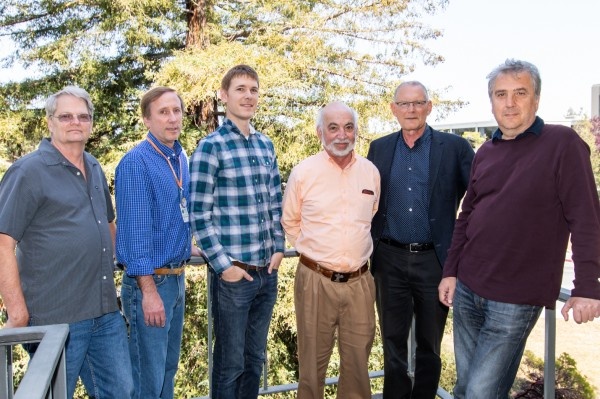 A New Type of EEG

Searching for a solution to the technical challenge, Norcia began talking to Kenney, who specializes in detector development for SLAC experiments that study nature’s most fundamental physics processes, and Martin Breidenbach, a professor of particle physics and astrophysics at SLAC and Stanford. “At SLAC, we’re trying to answer some of the really big questions about our universe, and figuring out how the human mind works seems to be right up there,” Breidenbach says. “We certainly have the engineering skills and resources to help with some of the technical issues in neuroscience. With our background in high-energy physics, we’re also used to multidisciplinary collaborations and know how to make them work.”

About a year after the project received funding through Stanford Bio-X, the team has successfully tested a prototype for an EEG system that can deliver electrical brain stimulation and measure the brain’s ongoing activity at the same time. To do so, they paired the electronics board of a conventional EEG monitor with another one they built that delivers electric stimuli generated with 9-volt batteries. Then they successfully tested the device on themselves.

“In the long run, we would like to develop a device on a chip.”

More work needs to be done before studies on a larger group of people can begin. For example, future versions of the device will have more electrodes and will provide more control over the way the pulses are delivered. “Right now, we can basically switch stimuli on and off and set their intensities and durations,” says SLAC’s Jeff Olsen, an electrical engineer on the project. “In the next generation, we’ll be able to program the device, which will let us choose different types of signal shapes and synchronize electrical signals with other external triggers, such as visual stimulation.”

But the team’s plans don’t stop there. “In the long run, we would like to develop a device on a chip,” Kenney says. That would make neurostimulation available to patients wherever they go.

A brain-computer interface array featuring microneedles affixed to a flexible backing allows arrays of micro-scale needles to conform to the contours of the brain.

Can 'pacemaker for the brain' help to treat neurological disorders?

A new neurostimulator developed by engineers at the University of California, Berkeley, can listen to and stimulate electric current in the brain at the same time, potentially delivering fine-tuned…

Brain-computer interfaces: Getting a Grasp on how we think

A world where machines can be controlled by thought alone – such is the promise of so-called brain-computer interfaces (BCI). BCIs are both hardware and software communication systems that read…