This April in Amsterdam, for the 2016 European Society of Clinical Microbiology and Infectious Disease (ECCMID), 340 late-breaker abstracts were submitted, 25 of which related to refugee health. Seven among those were chosen for airing. What they highlighted is the need for comprehensive screening programmes, improved therapy, and vaccination coverage in countries that have received and/or are receiving refugees.

Why? On top of the obvious physical and mental damage to these incomers, as Winfried Kern Programme Director of ECCMID said, researchers in various countries have observed an increased prevalence of resistant pathogens, or emerging or re-emerging infectious diseases, including HIV, TB, salmonella, shigella, scabies and other parasitic infections. ‘Healthcare services across the world are facing a number of new challenges as a result of recent mass migration,’ Kern confirmed. ‘Refugees may carry both resistant pathogens and microbes, causing the emergence or re-emergence of infectious diseases that have become less prevalent in host countries.

‘These include methicillin-resistant Staphylococcus aureus, HIV and tuberculosis. Infectious diseases carried and transmitted by travellers and migrants increase the disease burden. We recommend that public health facilities maintain and step up screening programmes and put the appropriate precautions and procedures in place to most effectively protect migrants and domestic populations in host countries.’

Clearly, politicians and health professionals worldwide face a number of unique public health challenges due to migrations. The refugee health researchers presented evidence from health services in Denmark, Germany, Switzerland, Taiwan, Norway, Brazil and the Netherlands regarding some of those challenges.

The highest risk was observed in sub-Saharan Africans and heterosexual cohorts, and refugee and family-reunified migrants were also more likely to seek medical treatment late, further increasing the risk of spreading the infection.

The researchers postulated that these results indicate migrants experience barriers in accessing HIV testing and call for a more systematic medical reception of newly arrived migrants in recipient countries.

An abstract on the prevalence of drug-resistant pathogens – MRSA and ESBL – at four Swiss refugee centres showed that refugees (irrespective of origin) had colonisation rates that were ten times higher for methicillin-resistant Staphylococcus aureus (MRSA) and five times higher for extended spectrum beta-lactamase (ESBL) compared to the local population.

The researchers also observed that more than a third of refugees from the Middle East were colonised by ESBL compared with less than a quarter in the general refugee population. The authors concluded that the increased rate of colonisation at body surfaces with resistant bacteria among refugees from certain areas needs to be taken into account in case of illness and admission to a hospital.

An analysis of the impact of immigrants and importation in Norway from 2006-2015, showed that the reporting rate of MRSA infections continues to increase there, boosted by imported cases, particularly in younger people and those with an immigrant background. The presented data suggests that tourism and immigration may be important drivers for the current rise in MRSA infections.

A screening of 20,312 stool samples taken at refugee centres in Thuringia, Germany, showed that, in 2015, one in every 300 refugees carried Salmonella or Shigella. As many as six ESBL-positive Shigella strains were isolated from Syrian children – two of them were resistant to ciprofloxacin. As a result of these findings, the surveillance programme with screenings for Salmonella and Shigella in children is being continued throughout 2016.

Researchers observed high rates of scabies and its complications among asylum seekers from Ethiopia, Eritrea and Somalia. This represents a considerable burden for the healthcare system, especially where refugee centres already are under considerable strain due to high numbers of new arrivals, the researchers commented. They suggest that scabies must be rigorously controlled in asylum seekers to reduce the risk of complicated cases, the strain on healthcare, and to prevent the spread to other patient groups in the proximity of individuals from high-risk countries.

Another challenge in the management of diseases affecting immigrants was illustrated by an abstract presented by researchers on adherence for anti-parasitic treatment in primary care centres in the city of São Paulo. The researchers reported a lack of adherence in Bolivian immigrants with Chagas disease, a parasitic disease that is in rural areas where poverty is widespread and where it is easily transmitted to people by insect vectors. B.M.

The need to consider a formal recommendation on early screening for lung cancer was acknowledged by the Cross Party Group for Cancer, held at the Scottish Parliament in Edinburgh in January. Attended…

Benefits: Are they a question of beliefs? 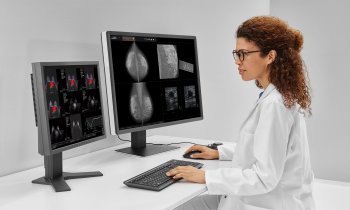