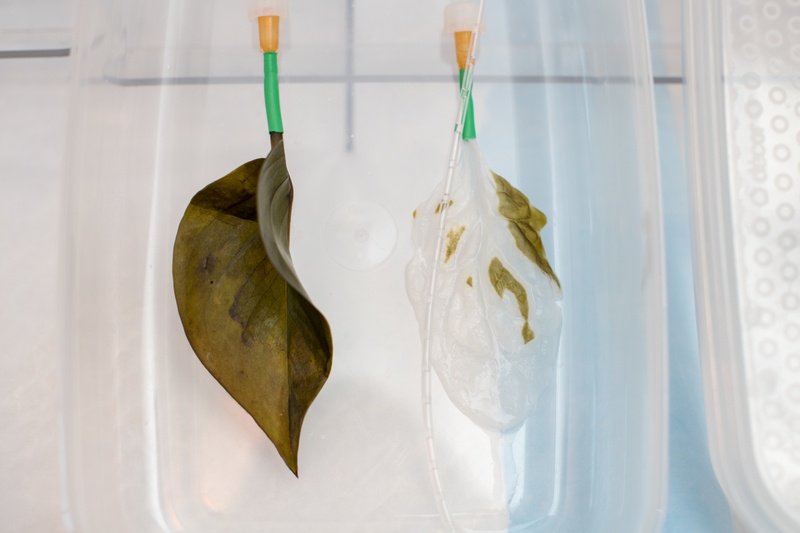 A regular spinach leaf (left) and one that is being decellularized. In the lab, all traces of plant cells, DNA and proteins are removed through a process called decellularization. Different types of cells then are used to repopulate the skeleton of the leaf and recellularize the leaf’s surface.

Dr. Kenneth Knox, professor and associate dean of faculty affairs and development, and Frederic Zenhausern, professor and director of the UA Center for Applied NanoBioscience and Medicine study lung infections such as Valley fever and inflammatory conditions such as sarcoidosis in a plant model. "The lung is a very complex organ," Knox said. "There are not many novel ways to study the lung, but growing cells on a leaf would be a way for us to organize cell types in a biologically meaningful way to learn more about lung immunity and lung fibrosis."

Knox hopes that by using inactive Coccidioides fungus — the cause of Valley fever — to simulate inflammation, they will be better able to understand how inflammation begins, which will pave the way for new therapies. The study not only will develop an innovative model to study pulmonary disease. The revolutionary approach, if successful, will allow researchers to bypass testing their theories on animals. "We are at a point in medicine where collaborations across disciplines are needed to take us to the next level," Knox said. "Our goal is to move the field forward in how we model different lung diseases." 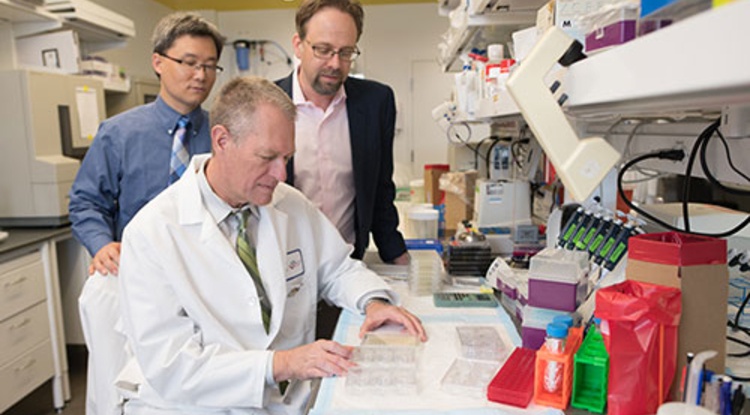 Frederic Zenhausern (seated) works with colleagues Dr. Kenneth Knox and Ting Wang (left) on research that combines their knowledge in engineering and medicine on a new model to study pulmonary diseases.

The idea for the lung on a leaf began with UA undergraduate researcher Ryan Zenhausern (Frederic Zenhausern's son) and his mentor, UA assistant professor Jerome Lacombe, who were developing a new cancer research model using spinach leaves. The natural spinach leaf structure was the basis for an improved in vitro (outside the body) tumor model to allow more accurate study of the causes, effects and treatment of different cancers.

Knox became interested in their research from a pulmonologist's perspective, because a lung and a leaf possess similar branching structures.
Frederic Zenhausern's lab has been working on the in vitro leaf platform — research on an engineered system that mimics a living organism — since last summer. Previously, the lab developed an "organ on a chip" that mimics the human gut. With this technology, researchers can analyze the complex interactions between human cells and the microbial ecosystems of the gut, predicting their effects on health or disease. "We are developing a tool that will better mimic the human system and improve the overall concept of personalized medicine," Zenhausern said. "We now can think about the long vision because we have those building blocks. If we can put a lung on a leaf, maybe next it will be a liver, or another organ."

The platform technology provides a 3-D tissue microenvironment that is constructed by treating a leaf with detergents to remove all traces of plant cells, DNA and proteins, leaving only its scaffold. Next, different types of cells are repopulated on the skeleton of the leaf and recellularized on the surface of the leaf. The stem vasculature can be populated with the appropriate cell types, which resemble blood vessels. The team hopes to use human patient cells by the third year of the grant.

In discussing how the research could be used in other realms, Zenhausern said the lung model could be used to measure radiation exposure in cancer patients and in space, where astronauts are exposed to large amounts of radiation. "From an engineering perspective, we are cross-utilizing the different fields from plant biology, medicine and engineering," he said. "We can create a platform technology that will be more useful in studying the entire biological system, which is very complex in medicine."

Fish oil does not appear to improve asthma control in adolescents and young adults with uncontrolled asthma who are overweight or obese, according to new research published online in the Annals of…

Up to 6.6 million premature deaths could be prevented in the US if smokers switched to e-cigarettes over a ten year period, suggests a study published in Tobacco Control, and those smokers who…

Treating asthma or COPD with steroid inhaler is a risky endeavour

Older people who use steroid inhalers for asthma or chronic obstructive pulmonary disease (COPD) are more likely to suffer particular bacterial infections, according to a large study published in the…