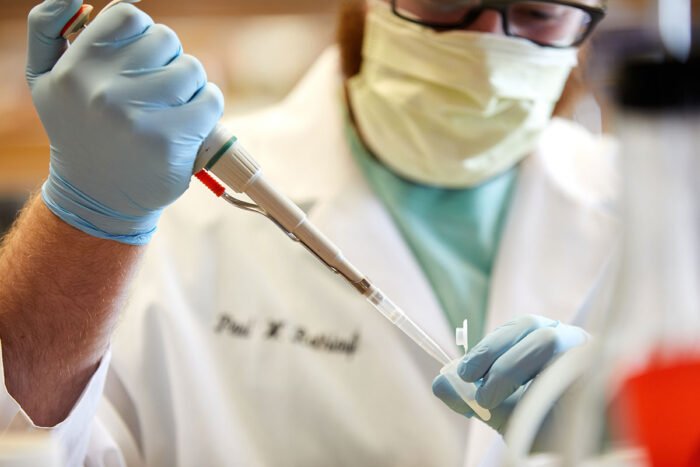 Paul Rothlauf, a visiting scientist at Washington University School of Medicine in St. Louis, works with a lab-made virus that infects cells and interacts with antibodies just like the COVID-19 virus, but lacks the ability to cause severe disease. This safer virus makes it possible for scientists who do not have access to high-level biosafety facilities to join the effort to find drugs or vaccines for COVID-19.

To help remedy that, researchers at Washington University School of Medicine in St. Louis have developed a hybrid virus that will enable more scientists to enter the fight against the pandemic. The researchers genetically modified a mild virus by swapping one of its genes for one from SARS-CoV-2, the virus that causes COVID-19. The resulting hybrid virus infects cells and is recognized by antibodies just like SARS-CoV-2, but can be handled under ordinary laboratory safety conditions. “I’ve never had this many requests for a scientific material in such a short period of time,” said co-senior author Sean Whelan, PhD, the Marvin A. Brennecke Distinguished Professor and head of the Department of Molecular Microbiology. “We’ve distributed the virus to researchers in Argentina, Brazil, Mexico, Canada and, of course, all over the U.S. We have requests pending from the U.K. and Germany. Even before we published, people heard that we were working on this and started requesting the material.”

To create a model of SARS-CoV-2 that would be safer to handle, Whelan and colleagues – including co-senior author Michael S. Diamond, MD, PhD, the Herbert S. Gasser Professor of Medicine, and co-first authors Brett Case, PhD, a postdoctoral researcher in Diamond’s laboratory, and Paul W. Rothlauf, a graduate student in Whelan’s laboratory – started with vesicular stomatitis virus (VSV). This virus is a workhorse of virology labs because it is fairly innocuous and easy to manipulate genetically. Primarily a virus of cattle, horses and pigs, VSV occasionally infects people, causing a mild flu-like illness that lasts three to five days.

Viruses have proteins on their surfaces that they use to latch onto and infect cells. The researchers removed VSV’s surface-protein gene and replaced it with the one from SARS-CoV-2, known as spike. The switch created a new virus that targets cells like SARS-CoV-2 but lacks the other genes needed to cause severe disease. They dubbed the hybrid virus VSV-SARS-CoV-2.

Using serum from COVID-19 survivors and purified antibodies, the researchers showed that the hybrid virus was recognized by antibodies very much like a real SARS-CoV-2 virus that came from a COVID-19 patient. Antibodies or sera that prevented the hybrid virus from infecting cells also blocked the real SARS-CoV-2 virus from doing so; antibodies or sera that failed to stop the hybrid virus also failed to deter the real SARS-CoV-2. In addition, a decoy molecule was equally effective at misdirecting both viruses and preventing them from infecting cells. “Humans certainly develop antibodies against other SARS-CoV-2 proteins, but it’s the antibodies against spike that seem to be most important for protection,” Whelan said. “So as long as a virus has the spike protein, it looks to the human immune system like SARS-CoV-2, for all intents and purposes.”

The hybrid virus could help scientists evaluate a range of antibody-based preventives and treatments for COVID-19. The virus could be used to assess whether an experimental vaccine elicits neutralizing antibodies, to measure whether a COVID-19 survivor carries enough neutralizing antibodies to donate plasma to COVID-19 patients, or to identify antibodies with the potential to be developed into antiviral drugs. “One of the problems in evaluating neutralizing antibodies is that a lot of these tests require a BSL-3 facility, and most clinical labs and companies don’t have BSL-3 facilities,” said Diamond, who is also a professor of molecular microbiology, and of pathology and immunology. “With this surrogate virus, you can take serum, plasma or antibodies and do high-throughput analyses at BSL-2 levels, which every lab has, without a risk of getting infected. And we know that it correlates almost perfectly with the data we get from bona fide infectious SARS-CoV-2.”

Since the hybrid virus looks like SARS-CoV-2 to the immune system but does not cause severe disease, it is a potential vaccine candidate, Diamond added. He, Whelan and colleagues are conducting animal studies to evaluate the possibility.

The study is available online in Cell Host & Microbe.

Scientists from The Peter Doherty Institute for Infection and Immunity in Melbourne have successfully grown the Wuhan coronavirus (also known as SARS-CoV-2) from a patient sample, which will provide…