A team from Imperial College London is using fluorescence molecular tomography (FMT) optical imaging technique to determine oxidised LDL (OxLDL) – known to play a major role in atherosclerosis and present in high quantities in plaques most likely to lead to a heart attack or stroke.

The method proved promising when identifying atherosclerotic plaques in mice models and potentially could show how likely an atherosclerotic plaque is to rupture in human patients. Once identified doctors could then treat those plaques, either with targeted drugs or a stent implanted in the affected areas.

Atherosclerosis is the build-up of fatty plaques in arterial walls that lead to the brain or heart. If an atherosclerotic plaque ruptures, it can form a clot, causing either a heart attack or stroke. Over 100,000 people die annually in the United Kingdom after suffering such events.

The team’s method to detect and visualise amounts of oxidised LDL (OxLDL) in atherosclerotic plaques involves near infrared optical imaging. For this, the researchers experimentally used a specially designed antibody that targets OxLDL, adding a fluorescent marker to visualise plaque areas that contained large amounts of OxLDL. The first part of the research utilised Fluorescence Molecular tomography (FMT), which is new technology that allows full-body optical molecular imaging of murine models. During a second part of the research, performed with Harvard Medical School, an infrared catheter was used to look inside the artery of atherosclerotic rabbits and detect any fluorescently-labelled antibody. The researchers hope that this approach will make details visible that are usually invisible to doctors using current technology to visualise atherosclerotic plaques. They are now working towards using the technique in people and can already detect the human form of OxLDL. 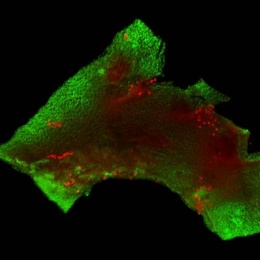 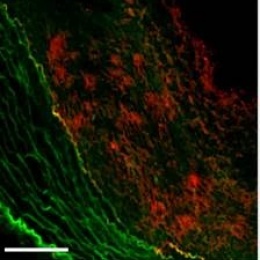 Consultant cardiologists and lead researcher Dr Ramzi Khamis: ‘We are excited about this step in the challenging field of optically imaging molecular activity of atherosclerosis. Most of the imaging techniques out there in the clinic look at morphology, the structural kind of components of atherosclerotic plaque, and although that tells you quite a lot, it does not tell you about the inflammatory status or molecular activity of plaque.

‘With this research we’re trying to pick out the plaques that are most likely to rupture before they cause a heart attack. Our next step will be to modify the technique that we’ve used here so that it can be used in patients to detect dangerous plaques.

‘We are also looking at the possibility of using the same antibody that we’ve developed to image the plaque to deliver drugs directly to the plaque itself. So, we have not only found a possible new diagnostic tool, we may also have discovered a new way to treat this deadly disease.’

Experts report that a new blood test to diagnose heart attacks could be carried out on a hand-held device in the not-too-distant future. The test, devised by a team at Kings College London, uses…