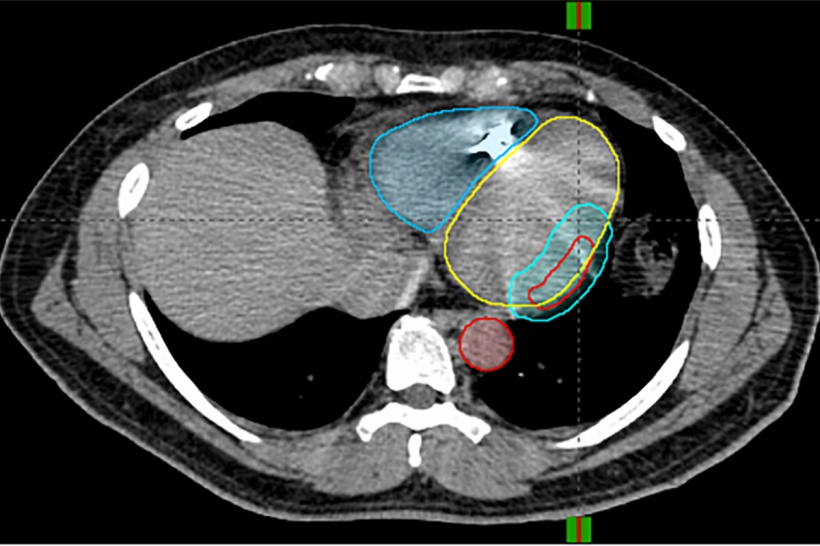 A novel strategy to treat a life-threatening irregular heart rhythm called ventricular tachycardia relies on noninvasive radiation therapy, which is typically directed at cancerous tumors. Noninvasive imaging techniques show irregular heart tissue mapped with the location of misfiring electrical signals, allowing doctors to direct radiation at the specific area of the heart triggering the problem. Pictured is a cross section of a patient's chest. The problematic heart tissue is highlighted in color.
Credit: Clifford Robinson

They treated five patients who had irregular heart rhythms, called ventricular tachycardia, at the School of Medicine. The patients had not responded to standard treatments and collectively experienced more than 6,500 episodes of ventricular tachycardia in the three months before they were treated with radiation therapy. In ventricular tachycardia, the heart beats exceedingly fast and its chambers often fall out of sync, interfering with blood flow and placing patients at risk of sudden cardiac death. When delivered directly to problematic areas of the heart muscle, the radiation therapy resulted in a dramatic reduction in the number of ventricular arrhythmia events in these patients, as measured by their implanted defibrillators.

While it’s wonderful that we can stop people from dying in that situation, the shock can be a traumatic event

An analysis of the patients’ experiences is reported in The New England Journal of Medicine. There have been two previous cases reported of treating ventricular tachycardia with radiation therapy, but this is the first to do so in an entirely noninvasive process, from imaging to treatment. “As a radiation oncologist who specializes in treating lung cancer, I’ve spent most of my career trying to avoid irradiating the heart,” said senior author Clifford G. Robinson, MD, an associate professor of radiation oncology. “But I also have been exploring new uses for stereotactic body radiation therapy that we use almost exclusively for cancer.”

At the same time, cardiologist and first author Phillip S. Cuculich, MD, an associate professor of medicine, was looking for new ways to treat ventricular tachycardia in patients who did not respond to conventional treatments. Ventricular tachycardia is estimated to cause 300,000 deaths per year in the U.S. and is the leading cause of sudden cardiac death. Standard therapy includes medication and invasive procedures that involve threading a catheter through a vein into the heart and selectively burning the tissue that causes the electrical circuits of the heart to misfire. “These patients have defibrillators implanted to act like a paramedic and save their lives if a bad heart rhythm starts up,” Cuculich said. “The device recognizes a dangerous arrhythmia and can deliver a life-saving electrical shock. While it’s wonderful that we can stop people from dying in that situation, the shock can be a traumatic event. Patients understand that they have just avoided death. And when this happens repetitively, often without warning, it can be devastating for patients.”

Ventricular tachycardia often develops after injury to the heart, commonly following a heart attack. As the heart muscle attempts to heal, the resulting scars interrupt the proper flow of electrical impulses. Traditional catheter ablation essentially kills off the tissue that triggers the electrical misfires. But the procedure is too risky for many patients with additional medical problems, and the arrhythmia often returns after a period of time. The five patients in the study had undergone catheter ablation procedures and their ventricular tachycardia returned, or they were unable to go through the procedure because of other high-risk medical conditions. One patient was on the waiting list for a heart transplant. Four of the patients were in their 60s; one patient was over age 80.

In the three months before treatment with noninvasive radiation therapy, the five patients together experienced more than 6,500 ventricular tachycardia events. The average number of events per patient during this time was 1,315, with a range of five to 4,312. During the first six weeks following radiation therapy, as the patients were recovering, they experienced a total of 680 episodes. In the one year the patients continued to be followed, they collectively had four events. Two patients didn’t experience any episodes at all. The investigators are cautious, saying they are still monitoring for long-term side effects of radiation therapy, such as lung scarring and further damage to the heart itself. They emphasized that their use of external radiation to the heart only included very ill patients in end-stage disease who had run out of options. More research is required before doctors might consider this approach for younger, healthier patients or as a possible addition to standard therapies. “A lot of my work is focused on reducing toxicity of radiation therapy using modern technology,” Robinson said. “These patients have done quite well in the first 12 months after therapy, which is enough time to see the early toxicities. But we’re continuing to monitor patients for long-term side effects.” The single dose of radiation these patients received is on par with what might be given to a patient with an early-stage lung tumor. Doctors can target such tumors with a large dose of radiation given once or up to five times.

We get a beautiful model of heart function that lets us see not only where the arrhythmia comes from, but where it might progress

The preparation and mapping of the anatomy and electrical circuits of the heart is time-intensive, but the treatment itself takes 10-15 minutes, the researchers said. “A traditional catheter ablation procedure can take six hours or more and requires general anesthesia,” Cuculich said. “This new process is entirely noninvasive. We take pictures of the heart with various imaging methods — MRI, CT, PET scans. But the unique piece is the noninvasive electrical mapping called electrocardiographic imaging. This allows us to pinpoint where the arrhythmias are coming from. When we overlay the scar mapping with the electrical mapping, we get a beautiful model of heart function that lets us see not only where the arrhythmia comes from, but where it might progress. “Based on these maps, Dr. Robinson is then able to deliver the energy entirely noninvasively,” Cuculich added. “It’s simply amazing to see a ventricular tachycardia patient get an ablation therapy for a few minutes and then get up off the table and walk out the door.”

Electrocardiographic imaging (ECGI) was developed by co-author and Washington University biomedical engineer Yoram Rudy, PhD, the Fred Saigh Distinguished Professor of Engineering. The radiation therapy does not take effect immediately. The number of arrhythmia events went down but did not disappear in the first six weeks after treatment, which the doctors characterize as a recovery period. After that six-week period, however, the number of events dropped to almost zero. Patients were able to slowly come off medications used to control the arrhythmia.

Of the five patients, one patient died in the first month after treatment of causes unlikely to be related to treatment. This patient, who was over age 80, had other heart conditions in addition to ventricular tachycardia. The remaining four, who are all in their 60s, are alive two years after radiation therapy. The patient on the transplant list went on to receive a new heart. One whose arrhythmia continues to be controlled also is dealing with gradual heart failure, meaning the heart muscle is weakening over time, and has received a left ventricular assist device. Two patients continue to live unassisted without ventricular tachycardia. The researchers currently are enrolling patients in a clinical trial to further evaluate this approach and, to date, have performed the procedure on 23 patients.

In Germany, more than 200,000 people suffer a heart attack every year. Despite good medical care, many are left with reduced cardiac output. This is particularly true for patients with severe heart…

Immunotherapy drugs can lead to higher risk of heart problems

A study of over a thousand cancer patients treated with immunotherapy drugs has found these patients are at greater risk of heart problems, including death from heart attack or stroke. The patients…