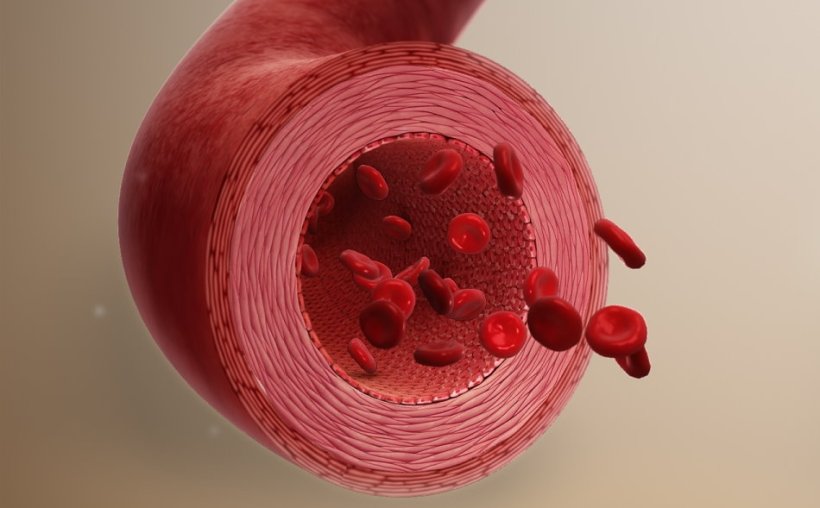 Arteries can become thicker due to high blood pressure. However, the cause of this thickening is unclear. TU/e researchers along with colleagues from Trinity College Dublin in Ireland have developed a new computer model to study the arterial thickening in detail. The model, presented in the Journal of the Mechanical Behavior of Biomedical Materials, shows that both mechanical changes in the artery due to higher blood pressure and cell communication involving so-called vascular smooth muscle cells could be critical for arterial thickening. The same model could be used to guide future approaches to therapeutic and regenerative treatments.

The growth and changing of arteries in the body depends on many factors, such as blood pressure. Arteries are known to become thicker due to higher blood pressure. “When the blood pressure increases, the artery stretches more and experiences higher forces. This leads to changes in the mechanics of the artery, and in response the artery gets thicker,” says Jordy van Asten, PhD researcher in the department of Biomedical Engineering and the Institute for Complex Molecular Systems (ICMS). “But other factors might be important too, such as how the artery cells talk to each other.”

To gain a better understanding of the mechanisms underlying arterial thickening, van Asten along with fellow TU/e researchers co-first author Tommaso Ristori, Frank Baaijens, Cecilia Sahlgren, and Sandra Loerakker, as well as researchers from Trinity College in Ireland developed a computer model to study how the combination of stretching of the artery and cell signaling affects arterial thickening.

One significant challenge for the researchers when developing the model was the need to capture the deformations of an artery when subject to high blood pressure. “Arteries are pre-stretched, meaning that even if the load due to high blood pressure is removed, the arteries are still not in a fully relaxed state,” notes van Asten. “Including this in the model was difficult, and we achieved this by using a finite element analysis of the stretches in healthy in-vivo or living native arteries.”

Also, the researchers had to estimate the right values of the material properties of the artery tissue that best capture the mechanical behavior. “Arriving at these properties involved a combination of assumptions based on experiments and fits from previous experimental studies,” says van Asten. 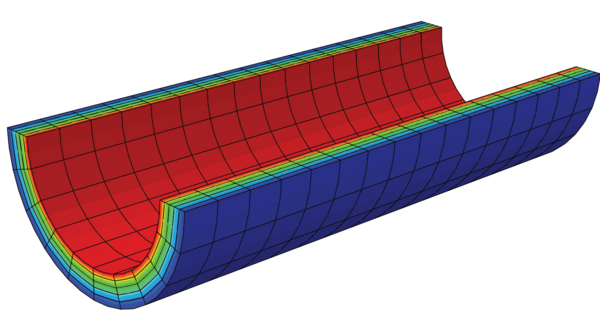 Capturing the right mechanical behavior of the artery is just one part of the computational puzzle. The other part relates to how cell-cell signaling is affected by the mechanical changes and how this could be driving the growth and remodeling of the artery. So, van Asten, Ristori, and their colleagues looked at the cell-cell Notch signaling or communication pathway between vascular smooth muscle cells (VSMCs), which is known to play a key role in how vascular tissue develops and remains stable. And to model this, the researchers used a so-called agent-based model, previously developed by Sandra Loerakker and collaborators in the past. “Using the model, we have learned how this Notch signaling pathway could be involved in the thickening of arteries due to higher blood pressure,” says van Asten. “We have shown higher blood pressure decreases the chatter among VSMCs which was predicted to change their behavior and, consequently, there is less growth or thickening of the artery.”

Besides high blood pressure, this finding on cell-cell communication (and artery growth) could be applied to other areas of research, such as tissue engineering. van Asten: “A lot of researchers are trying to create living, functional tissue (such as arteries) that could be used to replace diseased tissue in the body.”

In tissue engineering, tissues grow over time, either in the lab or inside the body. Extra control over the growth process would allow researchers to grow more precise replacement tissues, and key to all of this could be cell chatter. “Our new findings on cell-cell communication in tissue as it grows could prove critical for future tissue growth studies,” says van Asten.

And van Asten has great aspirations for tissue engineering in the future. “I hope that tissue engineering continues to advance so that we can reliably produce replacement tissue, perhaps even organs, for patients suffering from cardiovascular diseases. This research is just a small part of the puzzle, and prospects of how it will be used are exciting and motivating for me personally.” However, it will take a number of years before the findings of van Asten and his colleagues can be applied to grow new tissues. Van Asten: “First, we need to perform experiments and check if this is a feasible way to grow arteries, and if the resulting arteries are safe for patients.”