Image-guided surgery techniques include neuronavigation, intra operative MRI, fluorescence and intra-operative ultrasound (US). The latter presents with several benefits during and after surgery, although it remains an unusual imaging technique for neurosurgeons, according to Francesco Di Meco, full professor of neurosurgery and maxillofacial surgery at Milan State University and head of the department of neurosurgery at C. Besta Neurological Institute Foundation in Italy.

‘Intra-operative US is a real-time, dynamic and relatively inexpensive imaging technique. The improvement of the resolution and quality of images enables distinguishment between grey and white matter,’ he explained. Real time imaging is useful for anatomic structures identification, a challenging task even for very experienced neurosurgeons.

The fusion of neuronavigation and intraoperative US has helped understanding the semiotics – the study of signs and symbols and their use or interpretation – of ultrasound, and a number of softwares have been validated that combine the techniques, such as the Orion H2/US and Virtual Navigator.

This fusion may also help to correct one of the major drawbacks of neuronavigation: brain shift. ‘With neuronavigation,’ he explained, ‘two blended images of the tumour are not perfectly overlapping, there’s a gap.’ To correct this, surgeons can freeze one of the images, for example the MRI’s, and draw it over the image provided by ultrasound, and can repeat the operation as many times as necessary. ‘Having real-time images is useful at any point during surgery. You can check at any time how much tumour is left. And you can also check the end of resection, if there are some remnants of the tumour,’ Di Meco pointed out. 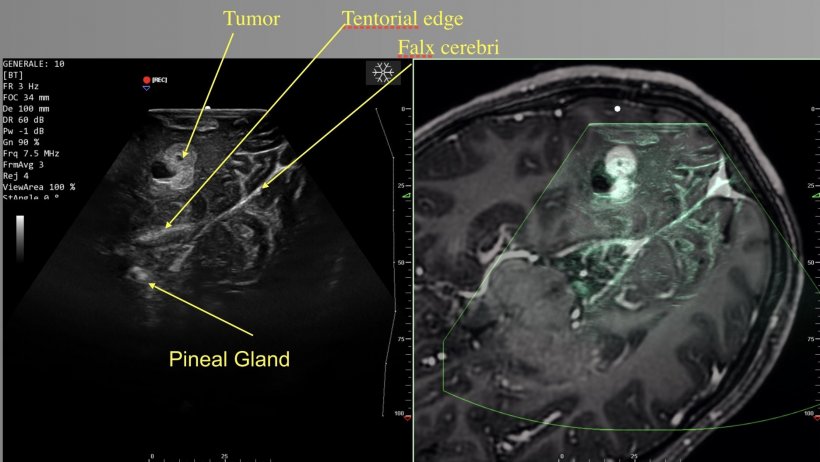 The neurosurgeon tackled the evolving role of intraoperative US with features such as Doppler, elastosonography and the use of contrast. Doppler enables the identification of vessels, notably those that have been impacted in tumour resection, while elastosonography provides information about stiffness of the tissue, using the colour reference scale to evaluate hard or soft tissue.

Elastosonography can also help to identify the borders of a tumour. ‘We found that elastosonography is superior to B-mode ultrasound for the definition of margins,’ he said. Research has shown that elastography is also useful to identify tumour remnants at the end of resection. Using contrast helps to obtain anatomical evidence and histology, and also to identify tumour remnants. It then brings visibility of the tumour’s feeding artery and draining vessels, the cystic and solid components of the tumour, and other key findings that can be very important information for surgeons.  Contrast also helps to obtain some hints about histology about grades of glioma, and, perhaps more importantly, may help to distinguish radiation-triggered necrosis from other cystic lesions. ‘With different degree of contrast uptake, you can differentiate between radiation necrosis and other cystic lesions such as metastases and abscesses, because radiation necrosis will never show contrast uptake,’ he explained. 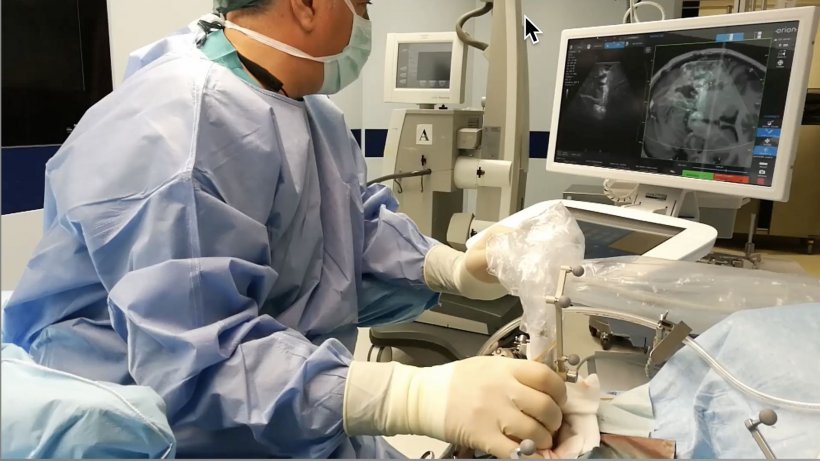 In addition, contrast uptake enables identification of tumour remnants, which is useful in the case of doubt about some possible presence of residual tumour. The EFSUMB recently revised its guidelines, introducing the indication for using contrast in ultrasound-guided neuro-oncological surgery procedures to assess tumour boundaries, perfusion patterns and residual tumour.

Intraoperative ultrasound has its drawbacks. It is based on unusual imaging and presents orientation difficulties. It also needs specific training and a few solutions have been developed in that sense.

Using a smartphone as a mock US probe and rehearsing intraoperative US scans with co-planar neuronavigation images, surgeons and residents may practice and learn the semeiotics of brain US scans without having the pressure of being in the OR

Di Meco and team at C. Besta Institute have developed, within a wider neurosurgical simulation program, a simulator of intraoperative ultrasound for brain tumours. The simulator comes as a software, which, upon pairing their smartphone to their computers, surgeons can rehearse intraoperative US cases just as in the operating room (OR). ‘Using a smartphone as a mock US probe and rehearsing intraoperative US scans with co-planar neuronavigation images, surgeons and residents may practice and learn the semeiotics of brain US scans without having the pressure of being in the OR,’ he said. This simulator is freely available on https://neurostream.academy/.

There is additional potential for ultrasound in neuro oncological surgery. For instance, high intensity focused ultrasound has been approved already to treat essential tremor, Parkinson’s disease and pain. ‘You can either use thermal ablation or the capacity to induce blood brain barrier disruption,’ Di Meco said. Another interesting development is the use of an US transparent cranial prosthesis that provides a window in the skull for US scans, by replacing the cranial bone flap. ‘This can be useful in order to follow-up patients and to disrupt the blood-brain-barrier,’ he pointed out. ‘US is a polyvalent modality, which encompasses several techniques including Doppler, elastosonography, contrast, blood brain barrier disruption and focused ultrasound – all of them,’ he concluded, ‘very promising in brain tumour treatment.’

Francesco Di Meco is full professor of neurosurgery and maxillofacial surgery at the department of pathophysiology and transplantation in Milan State University, Italy. He also heads the Department of Neurosurgery at the C. Besta Neurological Institute Foundation (Fondazione Istituto Neurologico C. Besta) in Milan. Di Meco is among the world’s leaders in intraoperative ultrasound in neurosurgery and has founded the first neurosurgical simulation centre in Europe, the Besta Neurosurgical Simulation Centre, which is one of the best-equipped simulation centres in the world. He has published more than 190 peer-reviewed papers and several book chapters (h-index: 50, Scopus) focusing on neurosurgical oncology and has gained considerable experience in the loco-regional treatment of brain tumours. the professor is also a co-author of the first international research that led to the identification of tumour stem cells in glioblastomas and alternative treatment strategies by inducing tumour cells differentiation.

A novel imaging technique that uses a synthesized form of scorpion venom to light up brain tumors has shown promise in a clinical trial. The imaging system enables neurosurgeons to better see…

New navigation imaging and neurophysiological stimulation techniques enable an approach to brain tumours long considered unresectable before and during surgery, but not one does it quite as well as…