Professor Etienne Danse, from the Imaging Department at St Luc University Hospital, in Louvain’s Catholic University, Belgium, focused on CT. In June 2016, his department switched from conventional CT to dual energy CT – which is based on body images at two levels of energy.

While not changing slice thickness, and maintaining image quality, he said in the example of acute pancreatitis, radiation dose was reduced by 30%, because of the ability to convert ‘true non-contrast series’ with ‘virtual non-contrast reconstructed images.’ In the case of acute bleeding, he said, virtual non-contrast can replace true non-contrast. ‘Radiation is similar or lower with dual energy CT, and we don’t need high contrast iodine concentration,’ he explained. ‘In some cases, we’ve reduced dose by 40-60%, and even up to 70%. This is possible when images are reconstructed at a lower energy level and, in this way, the presence of the iodine component in the body is enhanced. The dual energy system can be used with a lot of diagnosis for abdomen in adult patients with urinary tract problems, such as stones, hematuria, infection and ischemia; bowel inflammation and cancer, liver inflammation, gall bladder and biliary tract, pancreas and vessels.’ 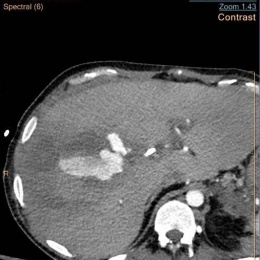 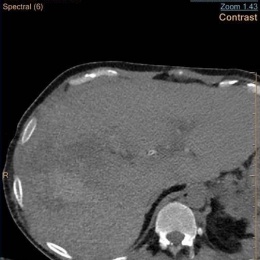 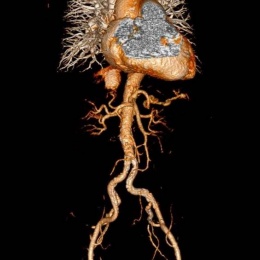 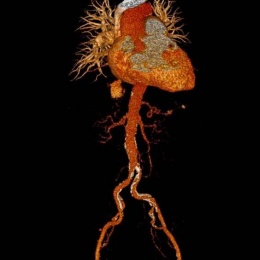 Professor Ingrid Millet, from the University of Montpellier, France, spoke about the MRI superiority in acute abdominal pain and in diagnosing specific pathologies, such as acute biliary disease, pancreatitis and gynaecological emergencies. She suggested that, in some circumstances, MRI can be an alternative to CT because of radiation concerns in pregnant women, and paediatric or young adult patients. ‘‘Whereas MRI offers an excellent soft tissue contrast, so can be used without IV contrast and has no ionising radiation, it has low accessibility, is expensive and time consuming, is sensitive to motion artefact in long examinations and has not been assessed yet for unselected abdominal pathologies.’

CT, she said, is fast, widely available and has a high diagnostic performance for many acute abdominal diseases, but uses ionising radiation and iodine contrast and is less accurate in characterising mass content. However, Millet conceded: ‘MRI is less precise than CT in diagnosing bowel perforation. With paediatric patients, ultrasound remains the first imaging modality to investigate acute abdominal pain while MRI can be used as a second line, especially for obese children or those older than nine, and for acute pelvic pain in paediatric female patients.’ Where MRI offers significant benefits is in characterisation of fluids and masses and sensitivity in pinpointing inflammation.

Parallel imaging allows for fast acquisition, yet concerns remain with MRI over its ability to diagnose when there is diffuse abdominal pain, its low sensitivity for free intraperitoneal gas and for non-obstructive renal stones, as well as a lower spatial resolution than CT.

Millet explained ways to optimise MRI protocols, such as by limiting the number of sequences and multi-planar acquisitions as well as using compressed sensing technologies that allow a decrease in acquisition time and would permit T1 weighted images acquisition in free breathing with very low temporal resolution. In future, she hopes MRI will replace CT as a first line imaging modality for appendicitis/diverticulitis and also to investigate bowel obstruction and diagnose bowel perforation, and accurately assess urologic emergencies. 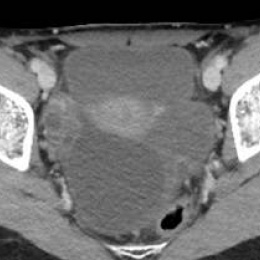 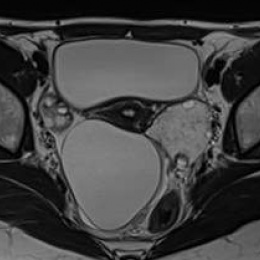 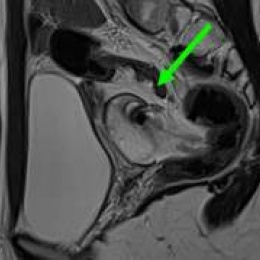 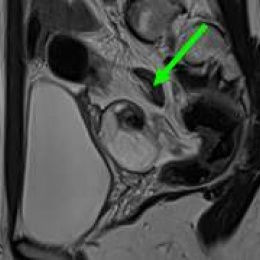 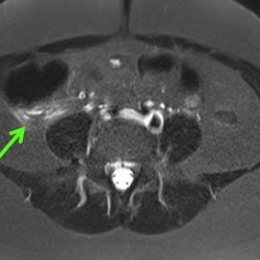 However, for now, ‘There is a need for standardisation of MRI protocols, assessment of enhanced sequences added-value, and for further radiologist training and education to be at ease with MRI images and their interpretation,’ she pointed out. One area that has proved effective to diagnose abdominal conditions in an emergency setting is contrast enhanced ultrasound. ‘Adding contrast increases the efficiencies of ultrasound in the emergency setting, and CEUS is also very useful in follow-up,’ said Dr Teresa Fontanilla, from the Hospital Universitario Puerta de Hierro-Majadahonda in Madrid, Spain.

Fontanilla has looked at the CEUS role in abdominal inflammatory and infectious conditions, highlighting the use of contrast when viewing hepatic abscess. ‘CEUS can help when there is an indeterminate suspicious mass and to determine the degree of liquefication  to decide on drainage and antibiotics, or just antibiotic treatment.’ In addition, she suggested CEUS is a valid tool for gastrointestinal tract and gynaecologic inflammatory lesions and at times for cholecystitis and prostatitis, offering delegates visible examples. CEUS can identify inflammatory bowel disease complications, appendicitis and diverticulitis complications and differentiate abscesses from phlegmon and measure abscess size, she added.

There are limitations to CEUS, e.g. a poor window and difficulty in detection of very small lesions, but, she said, ‘CEUS is an efficient, case-solving tool in selected cases in the emergency setting and has a general-purpose role in any abdominal inflammatory condition. It can also be used if there is a suspicion of drainage catheter obstruction or fistula and for follow-up away from the emergency setting. ‘It offers real-time, quick, assessment without radiation and nephrotoxicity.’ However, she added, the big advantage with CEUS is in direct patient contact,often at the bedside. 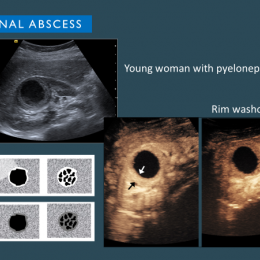 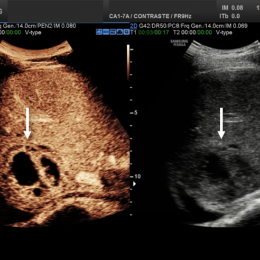 As radiologists worldwide continue to share their knowledge of COVID-19 to help fight the pandemic, two chest experts from France and Spain talked about their country perspectives and the practical…

In the USA, some patients have bled to death while in the CT scanner because this type of examination takes too long for blunt abdominal trauma diagnosis.

Ultrasound steps up for emergencies

You never know what you’re going to see in the Emergency Department (ED); but, more and more the first evaluation of a trauma patient’s condition will be with ultrasound.