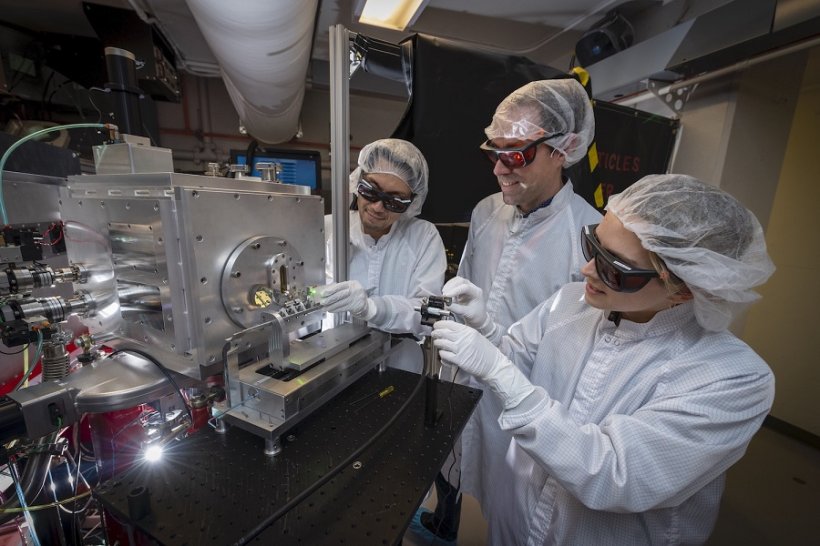 The ongoing project seeks to adapt the nascent technology of laser-driven ion accelerators – which are as cool as they sound – to make a more effective type of radiation therapy more readily available to patients.

“Proton therapy centers are large, expensive facilities, so they are limited around the world,” said co-lead author Antoine Snijders, a cancer researcher and senior scientist in the Biological Systems and Engineering (BSE) Division. “There is currently limited geographic distribution and access to proton therapy worldwide. The way to get broader access, and potentially lower costs, is to reduce the cost and footprint of these types of facilities. And that means we need more compact sources of ions for proton accelerators.”

The scientists are also investigating the potential benefit of using these accelerators to deliver proton beam radiation therapy at ultrahigh doses within extremely short exposure times – a technology called FLASH radiotherapy. Though the approach remains experimental for now, FLASH radiotherapy could change the landscape of radiation oncology. “If our work could also bring FLASH radiotherapy to patients, it could be the best of both worlds,” Snijders added.

Snijders and several colleagues in Berkeley Lab’s BSE Division are working with researchers at the Berkeley Lab Laser Accelerator (BELLA) Center, home to one of the world’s most advanced laser-based accelerators. The mutually beneficial pairing gives BELLA scientists a real-world application around which to refine their experimental laser platform, and gives the biologists a chance to test how living tissue responds to laser-driven (LD) proton beams at FLASH dose rates.

The early findings have everyone excited. In a paper published in Scientific Reports, the team shared results from their proof-of-principle experiments on normal human cells and tumor cells. The work was the first to show that FLASH doses can be delivered by LD accelerators, and it demonstrated that these aptly named radiation bursts resulted in higher survival of normal cells compared with cancerous cells.

Why FLASH and why protons?

There are two main types of radiation therapy: photon-based and ion-based. Photon-based therapies use focused beams of electromagnetic radiation in the X-ray or gamma-ray frequency ranges to kill cancer cells within tumors. The downside is that photon-based therapy also damages the healthy tissue in front of and behind the tumor in the path of the beam. Accelerated ions like protons behave differently. They deposit a low amount of energy in matter they encounter at the beginning of their path and a very high burst at the end, right before stopping completely. This phenomenon allows scientists to plot precise beam paths that deliver large radiation doses to tumors with minimal damage to tissue in front and no damage to tissue behind.

As there are a variety of particles that can deliver radiation to tumors, there are also many different ways to parse out the energy. The hit-it-fast-and-hard paradigm of FLASH radiotherapy has tantalized radiobiologists since the 1960s, when lab-based experiments suggested that FLASH dose rates can kill cancer cells while sparing a larger proportion of healthy tissue than treatments with longer, lower energy doses. However, the approach is not yet widely approved.

It is challenging to generate precise and consistent FLASH radiotherapy dose rates, even with traditional accelerators. “How do you accurately deliver a dose if you’re delivering it in a nanosecond – a billionth of a second?” explained Snijders. “That’s the challenge, because something can go wrong way faster than we can correct it.”

Following advances in technology, a small number of animal trials have been conducted in the past few years, and a single human clinical test of FLASH radiotherapy in Europe has demonstrated effectiveness in eliminating cancerous skin lesions while sparing normal skin. But researchers still don’t understand the biological mechanisms behind the impressive observations. So, understandably, some oncologists are hesitant to try FLASH doses in humans until we know more. According to team member and renowned radiobiologist Eleanor Blakely, this caution comes from a self-awareness of the field’s “need for prudent caution in assessing both acute and long-term effects, and for compliance with radiation safety requirements prior to the administration of new radiation modalities to human patients,” she said. Doctors and researchers “are very torn because they don’t want to delay if this is really something so different that it could revolutionize a whole field of cancer treatment. And yet we don’t completely understand how it works, even today, for conventional radiotherapy that saves lives every day.”

Molecular radiotherapy shows great potential in becoming a more mainstream treatment for cancer, but the field is being hampered by a limited radionuclide supply.

The accelerator in the equation

Currently, both ion- and photon-beam radiation therapies administered at medical centers are powered by conventional radiofrequency accelerators, which speed charged particles through a straight or circular vacuum chamber using electromagnetic fields and strong magnets. The cyclotron (invented by Berkeley Lab’s founder), and the world’s largest and most powerful modern accelerator (the Large Hadron Collider at CERN) are both examples of radiofrequency accelerators.

Laser-driven proton accelerators work by pointing a high-powered laser at a thin foil, thereby generating a tiny region of plasma – a state of matter where atoms are stripped of their electrons – inside a vacuum chamber. “In that plasma, strong electric fields accelerate protons and ions within a distance of a few microns (millionths of a meter). For reference, the width of a human hair is a few dozen microns,” said author Lieselotte Obst-Huebl, a research scientist at the BELLA Center, Accelerator Technology & Applied Physics Division.

The technology has a way to go before treatment centers will be able to purchase compact laser accelerators to power proton therapy. “It is still in its infancy, I would say, but the technology is advancing rapidly,” explained Kei Nakamura, the associate deputy director for experiments at the BELLA Center, and an author on the new paper. The BELLA Center was originally funded to develop only electron accelerators, he said, and the work to build proton accelerators didn’t begin until 2015. The collaborative project began in 2018, when Blakely serendipitously connected with BELLA Center scientists. “Our purposes have aligned quite well,” said Nakamura. “We wanted to have an application to work on in the lab, and the medical application has a big impact for society, so we are happy to have this collaboration.”

As of now, the distance from the point where the laser strikes the foil, creating the proton beam, to the point of contact with the cells – contained in custom-built metal and mylar film culture chambers – is only two meters. But the system that generates the laser is quite large – it takes up an entire room in the BELLA Center. Fortunately, the laser system doesn’t have to be right next to the treatment area, which is a limitation of RF accelerators in medical settings.

According to Nakamura, research from the past two decades has proven that LD ion sources have the potential to be much more compact and lower cost than RF ion sources. The lasers at BELLA have shrunk over the past 15 years and the technology continues to improve day by day, he said.

Fresh off the success of their first study, the collaboration is already deep into phase two. The BELLA team is currently developing new targeting technology that will focus the laser to much higher intensities, in turn generating higher energy protons. The existing focusing system generates beams that are only powerful enough to deliver FLASH radiotherapy to cells cultured in very thin sheets. When this upgrade, known as iP2, is completed, the higher ion beam energies will be powerful enough to penetrate deeper into living tissue. Snijders and Jian-Hua Mao, a senior scientist and co-author on the paper, will then assess the safety and therapeutic efficacy of the beam on animal models, first on superficial tissue, then on internal tumors.

“The work that we’re doing currently is fundamental to our understanding of the importance of FLASH radiotherapy effects at the physical, chemical, and biological levels,” said Blakely. “Here at Berkeley Lab, we have the capability to test all three levels, which can contribute a lot to the global effort to improve therapies.”

Researchers have succeeded in using metal oxide nanoparticles as "radiosensitizers" – and in producing them on an industrial scale.