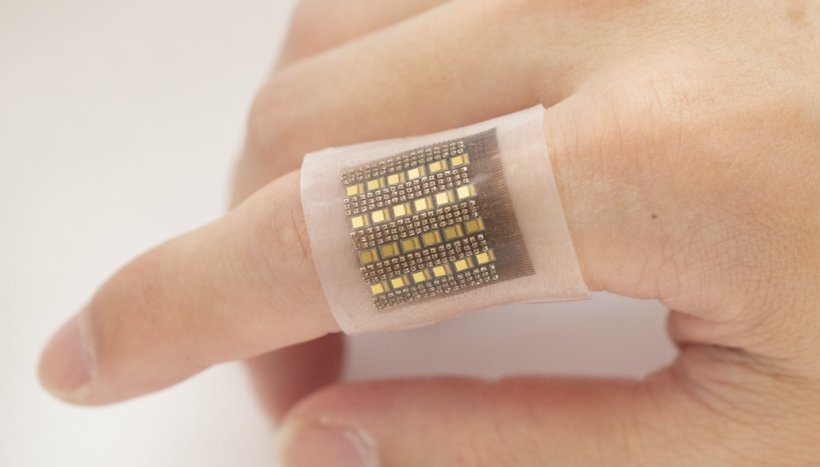 “The amount and location of hemoglobin in the body provide critical information about blood perfusion or accumulation in specific locations. Our device shows great potential in close monitoring of high-risk groups, enabling timely interventions at urgent moments,” said Sheng Xu, a professor of nanoengineering at UC San Diego and corresponding author of the study. The paper is published in Nature Communications. 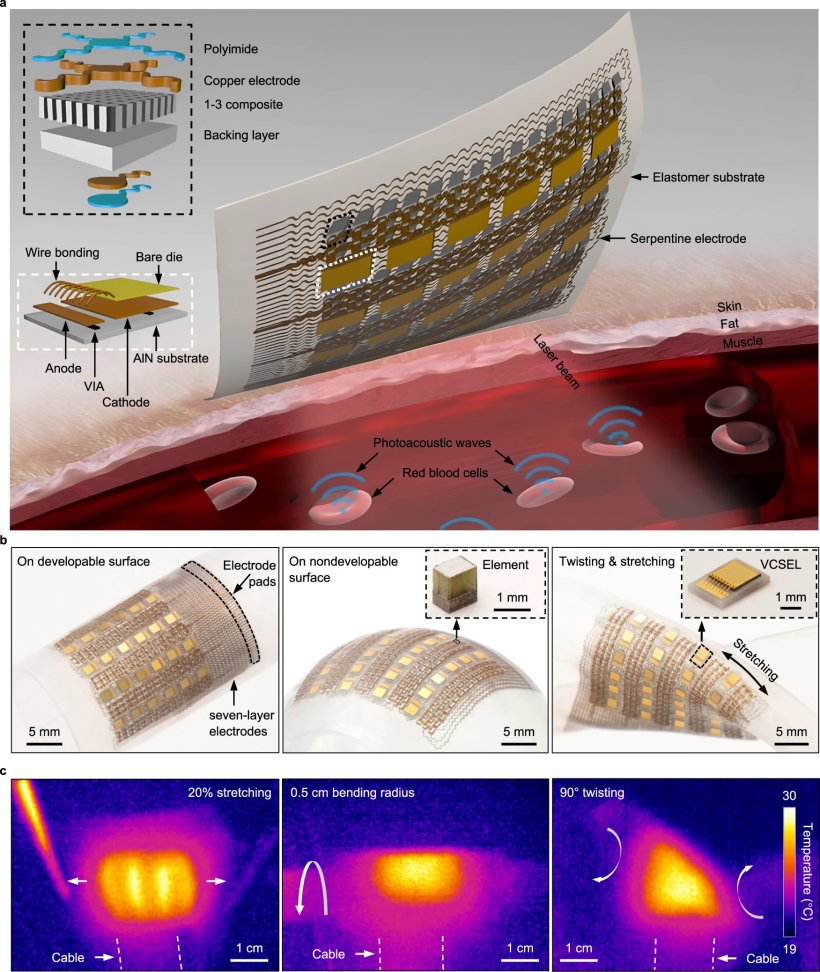 Design, fabrication, and working principle of the soft photoacoustic patch: the system remains operational even under various degrees of deformation (below).

Low blood perfusion inside the body may cause severe organ dysfunctions and is associated with a range of ailments, including heart attacks and vascular diseases of the extremities. At the same time, abnormal blood accumulation in areas such as in the brain, abdomen or cysts can indicate cerebral or visceral hemorrhage or malignant tumors. Continuous monitoring can aid diagnosis of these conditions and help facilitate timely and potentially life-saving interventions.

With its low-power laser pulses, [the sensor patch] is also much safer than X-ray techniques that have ionizing radiation

The new sensor overcomes some significant limitations in existing methods of monitoring biomolecules. Magnetic resonance imaging (MRI) and X-ray-computed tomography rely on bulky equipment that can be hard to procure and usually only provide information on the immediate status of the molecule, which makes them unsuitable for long-term biomolecule monitoring. “Continuous monitoring is critical for timely interventions to prevent life-threatening conditions from worsening quickly,” said Xiangjun Chen, a nanoengineering PhD student in the Xu group and study co-author. “Wearable devices based on electrochemistry for biomolecules detection, not limited to hemoglobin, are good candidates for long-term wearable monitoring applications. However, the existing technologies only achieve the ability of skin-surface detection.”

The new, flexible, low form-factor wearable patch comfortably attaches to the skin, allowing for noninvasive long-term monitoring. It can perform three-dimensional mapping of hemoglobin with a submillimeter spatial resolution in deep tissues, down to centimeters below the skin, versus other wearable electrochemical devices that only sense the biomolecules on the skin surface. It can achieve high contrast to other tissues. Due to its optical selectivity, it can expand the range of detectable molecules, integrating different laser diodes with different wavelengths, along with its potential clinical applications.

The patch is equipped with arrays of laser diodes and piezoelectric transducers in its soft silicone polymer matrix. Laser diodes emit pulsed lasers into the tissues. Biomolecules in the tissue absorb the optical energy, and radiate acoustic waves into surrounding media. “Piezoelectric transducers receive the acoustic waves, which are processed in an electrical system to reconstruct the spatial mapping of the wave-emitting biomolecules”, said Xiaoxiang Gao, a postdoctoral researcher in Xu’s lab and co-author of the study. “With its low-power laser pulses, it is also much safer than X-ray techniques that have ionizing radiation”, said Hongjie Hu, a postdoctoral researcher in the Xu group and study coauthor.

Silk-based material under skin changes color in response to oxygen, and in the future might be adapted to track glucose and other blood components.