In just two weeks Dr Edwin Quarello, from St. Joseph Hospital in Marseille, had the answer to a clinical question he had been asking for years: Is it possible to check for major congenital heart defects (CHD) across the general population of pregnant women before the second trimester?

Over the past 15 years foetal echocardiography exams have been increasingly used to detect CHD in high-risk populations, yet a 2004 study published in Prenatal Diagnosis showed that most cases of CHDs would occur in low-risk populations. Heart defects are a leading cause of death during the first year of life, touching five to nine newborns in the general population, and nearly every case of CHD is already established in the foetus by the first trimester. 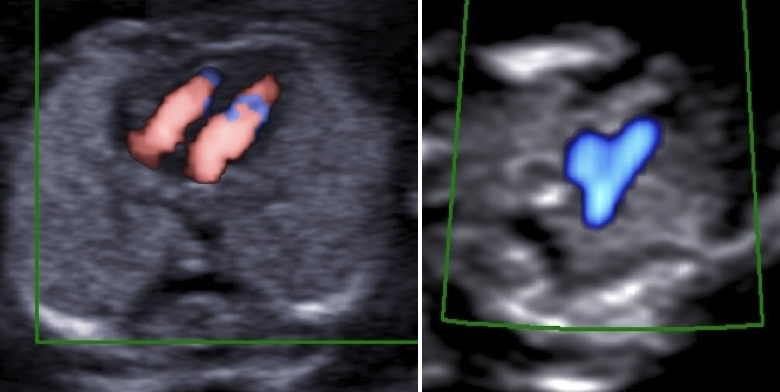 A basic heart exam in the first trimester using colour Doppler and/or directional power Doppler from the four chamber view as well as the three vessels and trachea view.

Quarello has been preaching the benefits of early detection in the first trimester, and teaching colleagues in the south of France how to perform what he calls the basic exam for the past 10 years. Last year he decided to use a novel methodology called a ‘flash study’, supported by the French College of Foetal Ultrasound (CFEF), to find out if the basic protocol could be competently performed by someone with basic ultrasound skills.

That French twist in clinical studies was introduced at the 2010 meeting of CFEF by Dr Laurent Salomon, who participated in this study and is a co-author of the resulting paper. The focus for a flash study must be narrowed to a single question, Quarello explained, and it must be conducted in a very short period, in this case just two weeks.

More than 150 physicians and midwives responded to his invitation to participate in the study. ‘What we asked was whether it would be possible for the participant to include all the views of the heart that we wanted to use for the study without modifying their time or methods during a routine first-trimester ultrasound examination.’ In one word, the answer is yes.

In a paper published in February, 2017 in Ultrasound in Obstetrics & Gynaecology, Quarello, et al. wrote: ‘This is the first such study of the feasibility of a first-trimester basic heart examination; the study was multicentric as opposed to previous studies in individual centres; the majority of observers were not echocardiography experts; and we present new criteria for assuring and assessing the quality of foetal echocardiography when obtaining 4CV (four-chamber view) and 3VT (three vessels and trachea) view cross-sections through the use of colour and/or power Doppler modes.’

‘In the end only 60 participants completely fulfilled the criteria,’ Quarello said. Twelve were midwives, 48 were physicians. Asked if this meant that roughly one in three willing participants was actually qualified to perform the basic exam he designed, Quarello sighed, responding: ‘Many cases were excluded for reasons completely outside the technical skills of the physician or midwife performing the exam. The truth is that, in addition to the images, participants were required to provide patient information, such as last name, first name, date of birth, and so on. Where this information was not complete, the case could not be included in the study. Some participants simply did not know how to send the images electronically.’ The entire study was conducted by email, he said. Despite this limitation inherent in a flash study, the 60 participants who met the quality standards performed an average of 10 exams for a total of 597 cases of first-trimester ultrasound examinations screening for CHD.

The successfully acquired 4CV and 3VT views were assessed as normal for 435 cases, or 73 percent, thereby assuring parents.  The remaining 30 percent of cases may merit a referral to a specialist. The authors note that some of the major CHDs detected would be amenable to skilled palliative surgery, while major defects, are associated with less successful surgical repair and termination of pregnancy may be an appropriate form of management.

‘Data suggest that psychological recovery after termination of pregnancy for foetal malformation is better the earlier the diagnosis is made,’ they wrote, or as Quarello explained, before the mother begins to feel the child moving and develops stronger attachment. The reason we are encouraging this exam during the first trimester is not to say to the world that we are able to see everything, but to show that we are able to screen, potentially to identify a major problem, which is different,’ he explained. ‘This study demonstrates the basic foetal heart exam can be performed without a high level of skills, and this is a major advance.’

Edwin Quarello MD is an obstetrician specia­lized in fetal medicine at the Institute for Reproductive Medicine at the St. Joseph Hospital in Marseille, France where he leads the service for obstetrical echography and prenatal diagnostics. He is a former clinical fellow in fetal cardiology at the Royal Brampton Hospital and St. Georges Hospital in London, UK.

Acknowledging the need for faster ultrasound automation, Dr Alexander Weichert explained how automated procedures can assist in the early detection of cardiovascular disease and prenatal dia­gnostic…