Glaucoma is the leading cause of irreversible blindness worldwide. It is characterised by optic nerve degeneration and progressive peripheral vision loss. Degeneration occurs due to elevated intraocular pressure that causes changes in the iridocorneal angle.

To treat this illness, ophthalmologists establish a diagnosis and advise the patient whether to undergo surgery or not, but the final decision lies with patients, who decide exclusively based on their doctor’s advice. However, the researcher Pablo Amil, from the research group in Nonlinear Dynamics, Nonlinear Optics and Lasers (DONLL) at the Universitat Politècnica de Catalunya · BarcelonaTech (UPC), in collaboration with Ulrich Parlitz, a researcher from the Max Planck Institute for Dynamics and Self-Organization in Germany and the Instituto de Microcirugía Ocular (IMO) in Barcelona, has created a tool that will objectively show patients the severity of their glaucoma and help them make an informed decision on surgery. 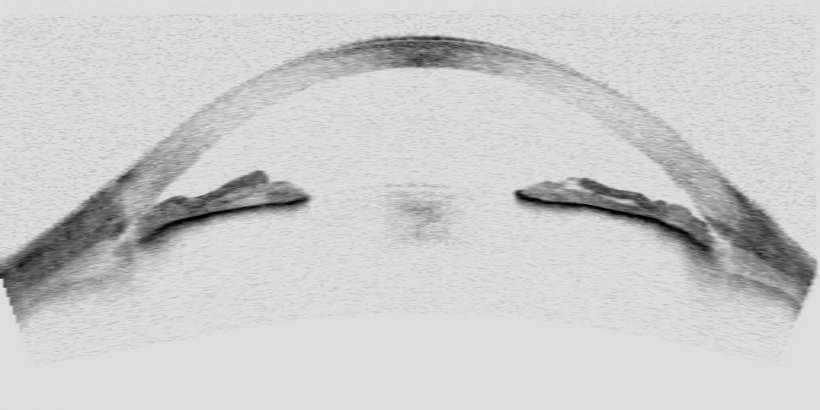 Detail of the iridocorneal angle of an eye.

From severe to mild

This is the first tomography map for diagnosing glaucoma, which consists of 1,000 tomographic images of the iridocorneal angle acquired using optical coherence tomography (OCT) and arranged on a grid, so that patients can easily understand the condition of their eyes by identifying them somewhere between the closed-angle area (severe) and the open-angle area (mild).

According to Pablo Amil, “when it comes to diagnosing, ophthalmologists just have a single tomographic image of their patient’s eye that shows the state of the iridocorneal angle. If the angle is closed, the drainage of the intraocular fluid is blocked and intraocular pressure rises. Doctors usually give quite accurate diagnosis, but patients lack comparative tools that help them decide whether they wish to undergo surgery or not. My work will allow patients to easily and objectively compare, through an image map, the severity of their condition and help them decide on or against surgery”. 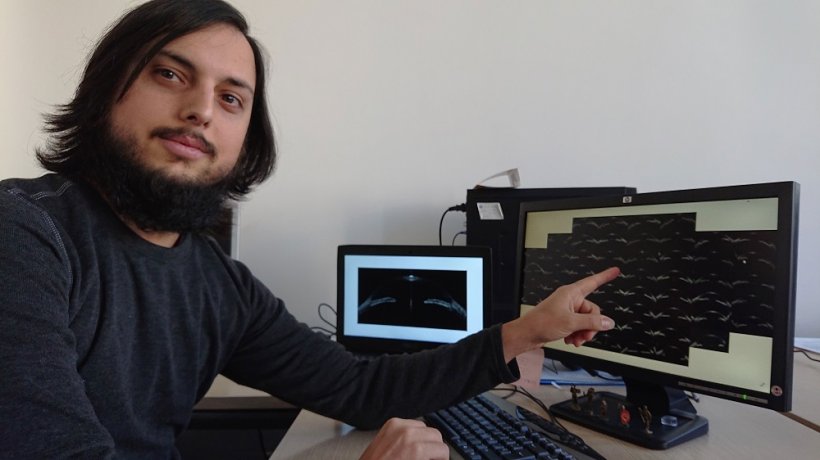 Pablo Amil, a researcher from the UPC’s research group in Non Linear Dynamics, Nonlinear Optics and Lasers (DNOLL) in Terrassa.

A correlation similar to ophthalmologist diagnosis

Pablo Amil has created the first tomography map for diagnosing glaucoma with an artificial intelligence algorithm, to which he applied 1,000 images of iridocorneal angles. He then sorted and arranged them on a grid according to severity (severe, moderate and mild) and compared this distribution with 160 diagnoses made by ophthalmologists. The correlation result is almost the same between the map created by Amil and the severity diagnosed by ophthalmologists.

Amil’s method has been developed in the framework of the European project Be-Optical, funded by the Horizon 2020 programme and coordinated by Cristina Masoller, another researcher at the UPC campus in Terrassa. The IMO is also participating in this project, which aims to train young researchers and develop new methodologies to analyse biomedical data and contribute to the early detection of eye diseases. The project is supported by the European Regional Development Fund (ERDF) and the ICREA Acadèmia.

The UPC, the Max Planck Institute for Dynamics and Self-Organization and the IMO were granted a European patent for this work. In the medium term, Amil’s comparative model will in fact be incorporated in a new tomographic imaging technology that will instantly show patients the severity of their glaucoma. The method has recently been published in Scientific Reports, from the publishers of the journal Nature, and the three owners of the patent are already negotiating with companies in the sector to bring it to market.

If the data won't come to the algorithm...

The new Joint Imaging Platform – JIP for short – is a flexible, decentralized analysis platform for medical images. The JIP was initially developed for the German Cancer Consortium (DKTK) sites.…