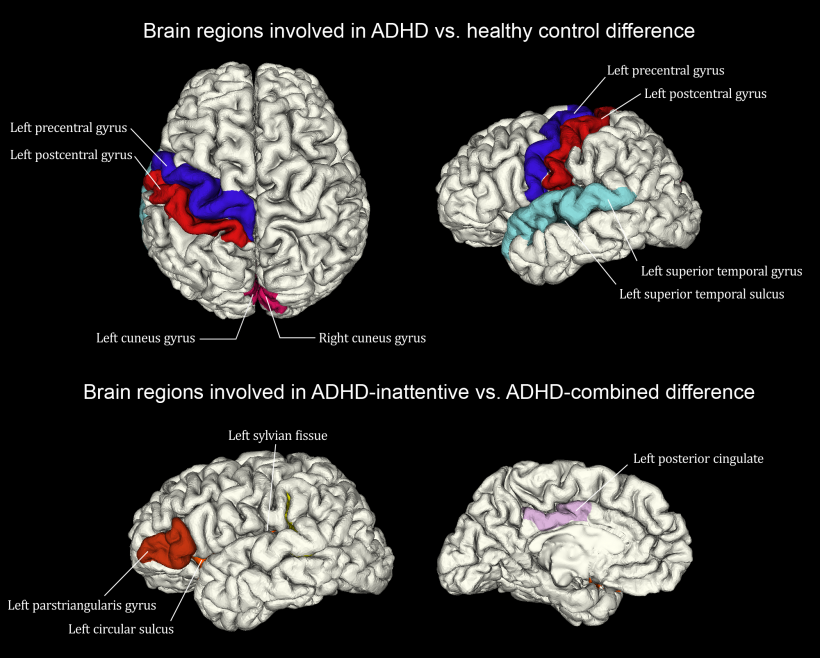 The brain regions related to differences are plotted on a 3-D brain model
Source: Q. Gong

Advances in MRI technology enable the detection, evaluation and follow-up of mental illnesses and psychiatric conditions. Recently, Chinese researchers have been able to identify and distinguish among subtypes of ADHD, thanks to data extracted from MRI scans.

Qiyong Gong, a radiologist at the West China Hospital, Sichuan University, revealed the details of a study he co-authored with colleagues Huaiqiang Sun and Ying Chen, ahead of its online publication in Radiology. The researchers used radiomics, i.e. the extraction of a large amount of quantitative information from digital imaging features that can be mined for disease characteristics. Gong and colleagues believe cerebral radiomics could improve diagnosis accuracy and help initiate adequate treatment earlier in patients with ADHD. ‘Earlier detection means earlier prediction. Using radiomics extracted from MRI scans, we can build and evaluate classification models based on pathological subtyping. These models can then assist the psychologist in diagnosing and subtyping ADHD,’ Gong explained.

The researchers examined 83 children aged 7-14 with newly diagnosed and never-treated ADHD, including children with the inattentive ADHD subtype (ADHD-1) and the combined subtype (ADHD-C). The scientists compared these MRI results with those of a control group of 87 healthy children of the same age, and screened relevant radiomics signatures from more than 3,100 quantitative features extracted from the grey and white matter.

While they found no overall difference between ADHD and controls in total brain volume or total grey and white matter volumes, Gong, Sun and Chen observed alterations in the shape of the left temporal lobe, bilateral cuneus and areas around left central sulcus. These differences contributed significantly to distinguishing ADHD from typically developing controls.

Within the ADHD population, features involved in the default mode network and the insular cortex significantly contributed to discriminating the ADHD inattentive subtype from the combined subtype. Results highlight the accuracy of the ­method: researchers could discriminate patients with ADHD with control subjects with 73.7 percent accuracy and to discriminate ADHD-1 from ADHD-C patients with over 80.1 percent accuracy. ‘These results are quite significant for future management and treatment of ADHD, and confirm psychoradiology will become a major tool in assisting clinicians to objectively diagnose as well as monitor the condition,’ he said.

During his ESMRMB talk Gong reviewed advances in this new field of radiology, which relies on imaging data analysis rather than visual inspection of images, particularly in imaging schizophrenia.

Ever since CT identified bilateral ventricular enlargement in patients with schizophrenia in 1976, imaging techniques have improved and the number of descriptions of structural or neuroanatomical abnormalities in mental illness has increased tremendously. Advances in MRI, particularly functional MRI (fMRI), MR spectroscopy, perfusion mapping, diffusion-tensor imaging (DTI) and tractography, have enabled to identify functional abnormalities particularly in patients with schizophrenia.

‘Studies have shown a neuroanatomical signature of schizophrenia across different ethnic groups. DTI has recently showed micro-structural differences between the brains of healthy patients and those with schizophrenia, including superior longitudinal fasciculus and inferior fronto-occipital fasciculus. However, there is dissociation between altered regions seen on structural studies and functional studies in default mode or fronto-parietal networks, and we must be aware of that,’ he said.

MRI techniques have also enabled identification of cerebral abnormalities after antipsychotic treatment, notably after two-year treatment, according to Gong. ‘We have observed greater loss of grey matter volume and increase in cerebrospinal fluid in the frontal lobe. ‘In the brain of patients with long-term schizophrenia who have never been medicated, we have also observed accelerated age-related decline in prefrontal and temporal cortical thickness, suggesting a neuroprogressive process.’

Psychoradiology will help to deeply understand the mechanisms of schizophrenia, provide objective detection and early diagnosis and enable prognosis and early treatment.

Research has also shown that structural changes remained relatively stable in the early years after a first episode of schizophrenia and became progressive in the later phase of illness. Functional changes, which may reflect physiological alterations related to clinical status, are more sensitive to reflect the effects of treatment on the brain, Gong pointed out.

In the future, imaging-based disease classification will gain importance vs. diagnostic and statistical manual of mental disorders. Standardisation will be necessary to clinically validate these techniques, but they will prove useful as they advance, in particular in data acquisition and analysis. Interventional psychoradiology will also develop, Gong predicted.

‘Image-guided interventions will be the next big thing. Psychoradiology will help to deeply understand the mechanisms of schizophrenia, provide objective detection and early diagnosis and enable prognosis and early treatment. Psychoradiology will also bring new information on other psychiatric conditions, such as depression, bipolar and borderline personality disorders, and mental health in general, for instance individual cognition, behaviour and fluid intelligence,’ Gong concluded.

Qiyong Gong MD, PhD is Professor of radiology at the West China Hospital at Sichuan University (China). His research has focused on imaging of neuropsychiatric disorders with the innovative utilisation of MRI for mental illnesses, contributing to psychoradiology. He has published over 300 peer-reviewed articles, which, in the last five years, have received over 10,000 citations. As a member of the mainstream professional organisation, the International Society of Magnetic Resonance in Medicine (ISMRM), Professor Gong was awarded the ISMRM New Horizons Lectureship in 2015, and the Fellowship of ISMRM in 2016. He is now Secretary and Future Chair of the ISMRM Governing Committee of the Psychiatric MR Study Group.