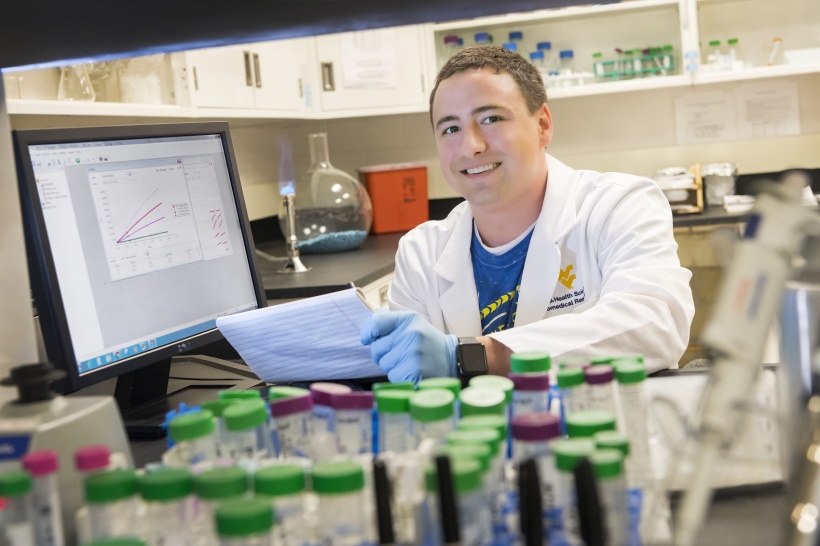 Raymond Anderson, a graduate student in the WVU School of Medicine, has received NIH funding to research the role that tau (a type of protein) plays in the development of Alzheimer's disease.
Source: West Virginia University

Amyloid plaques, sticky buildup that accumulates in and around neurons in the brain, have long been believed to be an indicator of neurodegenerative disease. Most clinical drug trials for Alzheimer’s disease treatment have failed, presumably because they target these plaques. But according to Raymond Anderson, a graduate student in West Virginia University’s School of Medicine, such buildup alone does not correlate with disease severity. In fact, these buildups may even protect neurons. The National Institutes of Health has awarded him $132,000 over three years to explore a different culprit: a specific form of a protein—called tau—that can sabotage neurons’ ability to break down and clear out damaged proteins.

Tau in itself is not harmful. In fact, it lends stability to the axons that make up nerves. Anderson likened tau to the cables on the Golden Gate Bridge. He explained that if a segment of tau becomes knotted or misfolded and breaks free of the “bridge” it can “float around the cell and wreak havoc.”

He will study how a free-floating and misfolded form of tau impairs a cell’s ability to scrap old proteins, which is important to keep neurons healthy. He will also determine if reviving the cells’ protein-degradation process can protect neurons from tau’s neurotoxic effects. “For the longest time, researchers thought it was these neurofibrillary buildups—or tangles—of tau that were the toxic forms, but there’s actually an argument that they could be neuroprotective by sticking to free floating toxic tau, sequestering it into the neurofibrillary tangle,” Anderson said. The notion that the free-floating, misfolded form of tau is toxic and entangled tau is protective still generates controversy among researchers, but it might be coming into wider acceptance.

If Anderson can pinpoint the way tau inhibits the protein-degrading process, the discovery can lead to medications that keep tau from interfering with healthy protein degradation or help cells compensate for it. “While we expect that this toxic form of tau that Mr. Anderson is studying contributes to neuronal dysfunction in Alzheimer’s disease, it also appears that this may be just the tip of the iceberg, since we have also found other misfiled proteins from Parkinson’s disease and Huntington’s disease with similar mechanisms of action,” said David Smith, who serves as Anderson’s research adviser, is an associate professor of biochemistry and is a faculty member in the WVU Rockefeller Neuroscience Institute. “There are many ways that tau can possibly be inhibiting protein degradation,” Anderson said. “I like this research because it gives me the opportunity to tease out the precise molecular mechanisms of tau’s toxicity to the giant molecular machines responsible for protein degradation.”