The session provided new insights into pressure-strain loops (PSL) analysis for the non-invasive assessment of left ventricular (LV) myocardial work and its potential clinical applications. Dr Elena Galli from Rennes University Hospital in France said the objective is to present the benefits of PSL analysis as a new technique for assessment of left ventricular performance. She said: ‘The main aspect of this technique is that it allows an assessment of myocardial work in a way that is reliable and not invasive.’

Since PSL emerged in 2012, it has been validated by various research groups for estimating myocardial work in a reliable fashion in several different pathologies, she added, and most widely shown as beneficial in CRT candidates. ‘Studies also show applicability of the method to other clinical conditions; for instance, in patients with hypertension, systolic heart failure, diastolic heart failure, and valvular heart disease, particularly aortic stenosis,’ said Galli. ‘Also, there are some pioneer studies that have started for the non-invasive assessment of the myocardial work of the right ventricle by the analysis of pressure-strain loops.’ 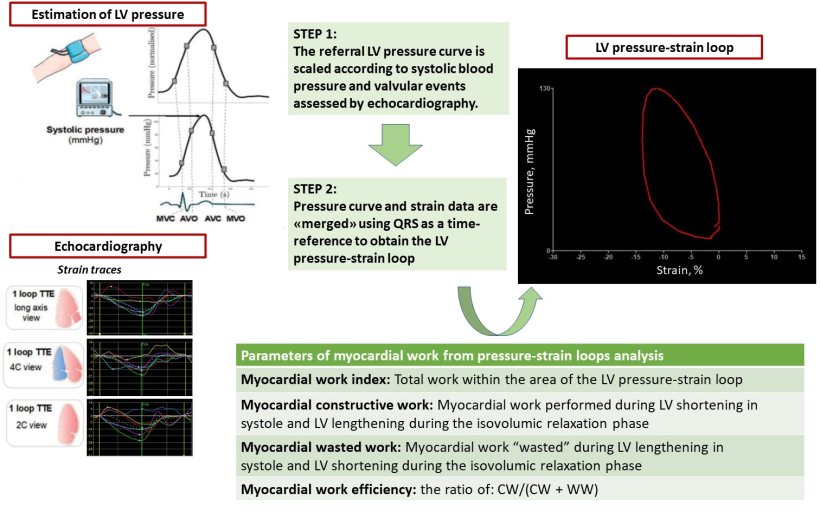 Other approaches to assess left ventricular function and performance – such as left ventricle ejection fraction and strain – have limitations, she continued, because they simply measure LV fiber shortening and do not take into account the effect of afterload on LV function. As such, PSL seems to provide a more precise and physiological assessment of LV function. ‘This is one of the main points of the technique, together with its non-invasive nature,’ she said.

In the future [PSL] could replace some of the parameters that we use now, for instance LV strain

Galli believes cardiologists can use PSL to highlight local differences in myocardial work to enable selection of patients receiving CRT and, in the future, it may offer pathophysiological insight into other disease states, such as heart failure and valvular heart disease. The technique is only slowly entering clinical practice and not being widely applied to patients despite the increasing numbers of studies being conducted in the field. ‘We can see that the evidence in research, and interest on parameters derived by PSL analysis, is increasing,’ Galli added. ‘I think that in the future it could replace some of the parameters that we use now, for instance LV strain, but we need wider evidence to prove it, so we are still at the starting point of the method.’

Blood pressure is one of the most basic parameters in any healthcare status assessment and holds considerable diagnostic significance. However, clinicians should never underestimate the complexity…

Are skin swabs the future of Covid-19 testing?

Skin swabs are "surprisingly effective" at identifying Covid-19 infection, according to new research, offering a route to a non-invasive future for Covid-19 testing.