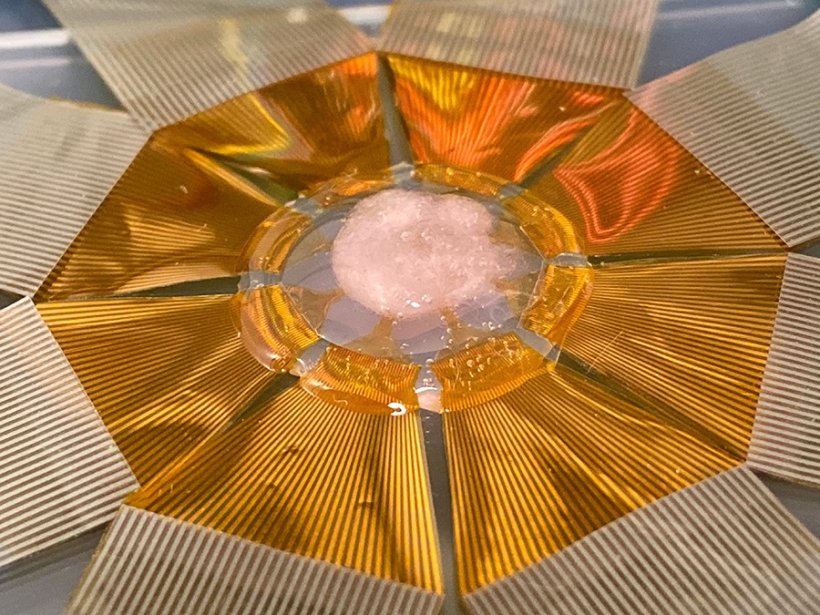 The device directly measures the movement and speed of electrical signals traveling within a single heart cell—a first—as well as between multiple heart cells. It is also the first to measure these signals inside the cells of 3D tissues.

The sensor could enable scientists to gain more detailed insights into heart disorders and diseases such as arrhythmia (abnormal heart rhythm), heart attack and cardiac fibrosis (stiffening or thickening of heart tissue).

“Studying how an electrical signal propagates between different cells is important to understand the mechanism of cell function and disease,” said first author Yue Gu, who recently received his Ph.D. in materials science and engineering at UC San Diego. “Irregularities in this signal can be a sign of arrhythmia, for example. If the signal cannot propagate correctly from one part of the heart to another, then some part of the heart cannot receive the signal so it cannot contract.”

“With this device, we can zoom in to the cellular level and get a very high resolution picture of what’s going on in the heart; we can see which cells are malfunctioning, which parts are not synchronized with the others, and pinpoint where the signal is weak,” said senior author Sheng Xu, a professor of nanoengineering at the UC San Diego Jacobs School of Engineering. “This information could be used to help inform clinicians and enable them to make better diagnoses.” 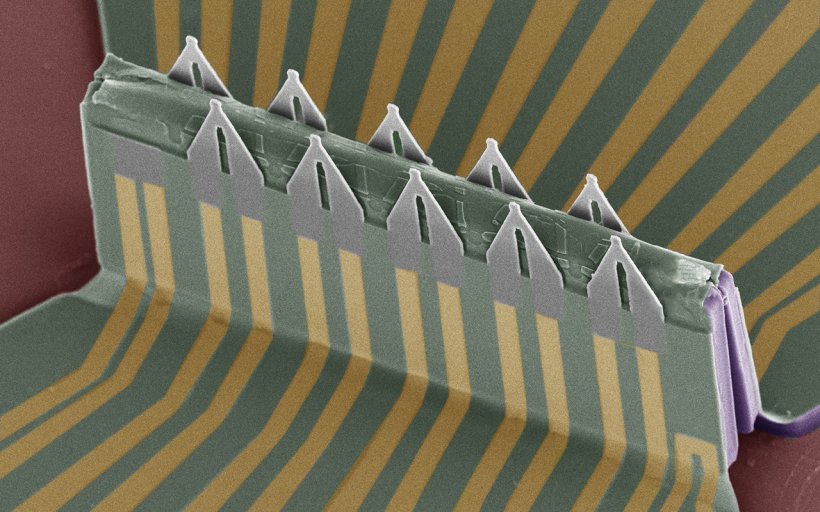 SEM image of the “pop-up” sensors that directly measure speed and movement of electrical signals inside heart cells.

The device consists of a 3D array of microscopic field effect transistors, or FETs, that are shaped like sharp pointed tips. These tiny FETs pierce through cell membranes without damaging them and are sensitive enough to detect electrical signals—even very weak ones—directly inside the cells. To evade being seen as a foreign substance and remain inside the cells for long periods of time, the FETs are coated in a phospholipid bilayer. The FETs can monitor signals from multiple cells at the same time. They can even monitor signals at two different sites inside the same cell.

“That’s what makes this device unique,” said Gu. “It can have two FET sensors penetrate inside one cell—with minimal invasiveness—and allow us to see which way a signal propagates and how fast it goes. This detailed information about signal transportation within a single cell has so far been unknown.”

To build the device, the team first fabricated the FETs as 2D shapes, and then bonded select spots of these shapes onto a pre-stretched elastomer sheet. The researchers then loosened the elastomer sheet, causing the device to buckle and the FETs to fold into a 3D structure so that they can penetrate inside cells.

“It’s like a pop-up book,” said Gu. “It starts out as a 2D structure, and with compressive force it pops up at some portions and becomes a 3D structure.”

The team tested the device on heart muscle cell cultures and on cardiac tissues that were engineered in the lab. The experiments involved placing either the cell culture or tissue on top of the device and then monitoring the electrical signals that the FET sensors picked up. By seeing which sensors detected a signal first and then measuring the times it took for other sensors to detect the signal, the team could determine which way the signal traveled and its speed. The researchers were able to do this for signals traveling between neighboring cells, and for the first time, for signals traveling within a single heart muscle cell.

What makes this even more exciting, said Xu, is that this is the first time that scientists have been able to measure intracellular signals in 3D tissue constructs. “So far, only extracellular signals, meaning signals that are outside of the cell membrane, have been measured in these types of tissues. Now, we can actually pick up signals inside the cells that are embedded in the 3D tissue or organoid,” he said.

The team’s experiments led to an interesting observation: signals inside individual heart cells travel almost five times faster than signals between multiple heart cells. Studying these kinds of details could reveal insights on heart abnormalities at the cellular level, said Gu. “Say you’re measuring the signal speed in one cell, and the signal speed between two cells. If there’s a very big difference between these two speeds—that is, if the intercellular speed is much, much smaller than the intracellular speed—then it’s likely that something is wrong at the junction between the cells, possibly due to fibrosis,” he explained.

Biologists could also use this device to study signal transportation between different organelles in a cell, added Gu. A device like this could also be used for testing new drugs and seeing how they affect heart cells and tissues.

The device would also be useful for studying electrical activity inside neurons. This is a direction that the team is looking to explore next. Down the line, the researchers plan to use their device to record electrical activity in real biological tissue in vivo. Xu envisions an implantable device that can be placed on the surface of a beating heart or on the surface of the cortex. But the device is still far from that stage. To get there, the researchers have more work to do including fine-tuning the layout of the FET sensors, optimizing the FET array size and materials, and integrating AI-assisted signal processing algorithms into the device.

The research was published in the journal Nature Nanotechnology.

New approaches, solutions and outlooks on biologised medical technology developed in the Berlin metropolitan region were presented at this year’s annual 'Medical technology meeting place' in…

Routine clinical use will take another decade

Numerous cardiac muscle cells die following myocardial infarction, due to reduced blood flow in the affected muscle areas. What remains is a scar, which also mechanically affects cardiac pumping. The…

After a heart attack