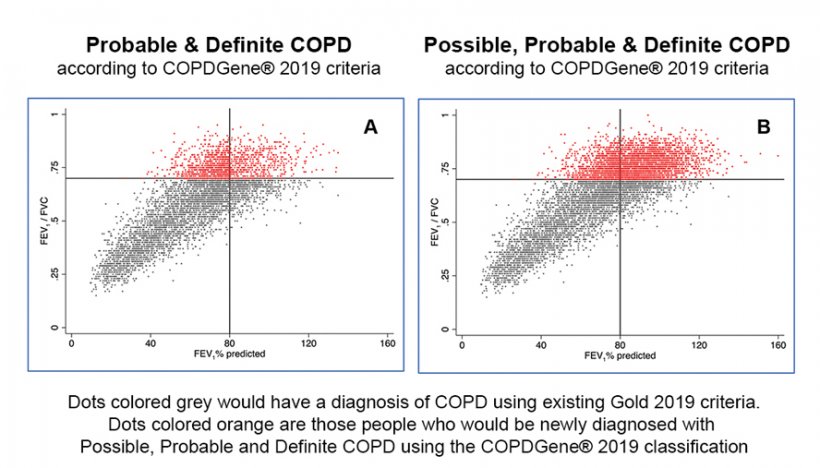 If used, the new diagnostic criteria could increase the number of patients diagnosed with COPD, by 15 percent to 36 percent, or about 2 million to 5 million people. “Our proposed diagnostic criteria better capture the full spectrum of people suffering from COPD,” said James Crapo, MD, senior author on the paper. “This can lead to better care for patients and stimulate research to slow or stop progression of the disease or even prevent it.”

COPD is a progressive, complex combination of airway inflammatory disease, chronic bronchitis and emphysema. Smoking tobacco is the most common cause of COPD, although about 15 percent of COPD patients never smoked. Approximately 12 million people in the United States have been diagnosed with COPD, and many million more are thought to have undiagnosed COPD. Every year, about 120,000 people in the United States die of the COPD.

The researchers evaluated 8,784 smokers and former smokers enrolled in the COPDGene® study. At enrollment, the researchers documented patients’ environmental exposures (smoking), symptoms (shortness of breath, chronic cough and phlegm), structural abnormalities on CT scans (emphysema, gas-trapping and airway wall thickness) and lung function or spirometry (total volume of air exhaled from the lungs, and the volume of air exhaled in one second). They then correlated those measures with mortality and loss of lung function five years later and compared them with smokers with none of the other criteria.

All patients met one of the criteria: smoking history. Those meeting either one, two or three additional criteria all had increased risks of losing significant lung function in five years or dying. Smokers meeting one of the other three criteria were designated as having Possible COPD. Their risk of losing significant lung function was 26 percent greater than smokers meeting no additional criteria, and a 28 percent higher chance of dying within five years.

“If we diagnose COPD based only on impaired lung function, then we miss many patients in the early stages of the disease,” said Dr. Crapo, who is also co-principal investigator of COPDGene®. “While some physicians do empirically treat patients with symptoms, many patients are not getting therapy that can improve their symptoms, their quality of life, and might extend their lives. “Right now people who do not meet the current diagnostic criteria for COPD are not included in clinical trials of experimental COPD therapies. Our proposed diagnostic criteria could open clinical trials to these people, stimulate important research of potential therapies to slow, stop or even prevent progression of the disease.”

As knowledge about Covid-19 advances, so does the arsenal of techniques to predict, diagnose and follow up on the disease. At this year’s ECR, researchers presented a range of promising imaging…

A recent preprint study in France underpins the debate on whether lung ultrasound (LUS) should be used to triage COVID-19 patients better at the hospital as well as in primary care. The eChoVid…

In a study of more than 1,000 patients published in Radiology, chest CT outperformed lab testing in the diagnosis of 2019 novel coronavirus disease (COVID-19). Researchers at Tongji Hospital in…