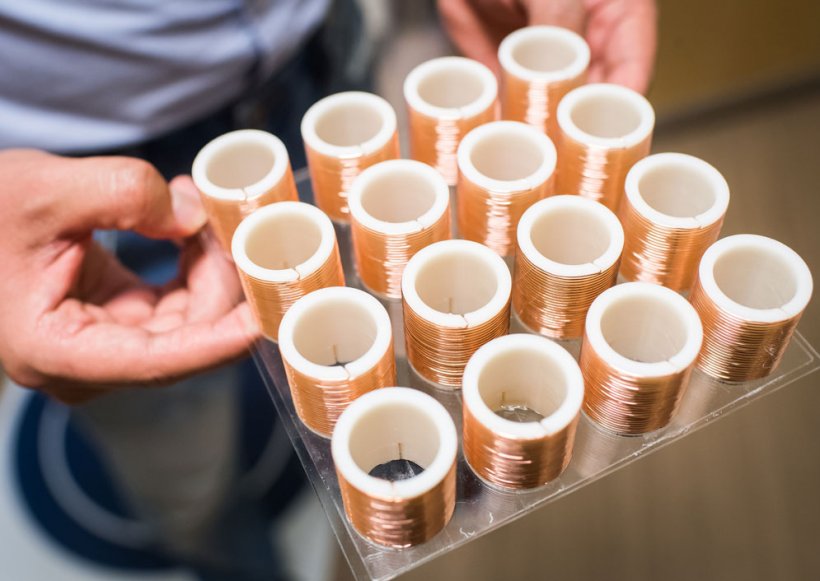 researchers have developed a new metamaterial that can improve MRI quality and cut scan time in half. This array of helical resonators stands at three centimeters tall and is constructed from 3D-printed plastic and coils of thin copper wire.

Could a small ringlike structure made of plastic and copper amplify the already powerful imaging capabilities of a magnetic resonance imaging (MRI) machine? Xin Zhang, Stephan Anderson, and their team at the Boston University Photonics Center can clearly picture such a feat. With their combined expertise in engineering, materials science, and medical imaging, Zhang and Anderson, along with Guangwu Duan and Xiaoguang Zhao, designed a new magnetic metamaterial, reported in Communications Physics, capable of boosting the performance of MRI in more ways than one.

MRI uses magnetic fields and radio waves to create images of organs and tissues in the human body, helping doctors diagnose potential problems or diseases. Doctors use MRI to identify abnormalities or diseases in vital organs, as well as many other types of body tissue, including the spinal cord and joints. “[MRI] is one of the most complex systems invented by human beings,” says Zhang, a College of Engineering professor of mechanical engineering, electrical and computer engineering, biomedical engineering, materials science and engineering, and a professor at the Photonics Center.

Depending on what part of the body is being analyzed and how many images are required, an MRI scan can take up to an hour or more. Patients can face long wait times when scheduling an examination and, for the healthcare system, operating the machines is time-consuming and costly. Strengthening MRI from 1.5 T (the symbol for tesla, the measurement for magnetic field strength) to 7.0 T can definitely “turn up the volume” of images, as Anderson and Zhang describe. But although higher-power MRIs can be done using stronger magnetic fields, they come with a host of safety risks and even higher costs to medical clinics. The magnetic field of an MRI machine is so strong that chairs and objects from across the room can be sucked toward the machine—posing dangers to operators and patients alike.

In contrast, Zhang and Anderson say that their magnetic metamaterial could be used as an additive technology to increase the imaging power of lower-strength MRI machines, increasing the number of patients seen by clinics and decreasing associated costs, without any of the risks that come with using higher-strength magnetic fields. They even envision the metamaterial being used with ultra–low field MRI, which uses magnetic fields that are thousands of times lower than the standard machines currently in use. This would open the door for MRI technology to become widely available around the world. “This [magnetic metamaterial] creates a clearer image that may be produced at more than double the speed” of a current MRI scan, says Anderson, a School of Medicine professor of radiology and vice chairman of research in Boston Medical Center’s radiology department.

The magnetic metamaterial is made up of an array of units called helical resonators—three-centimeter-tall structures created from 3D-printed plastic and coils of thin copper wire—materials that aren’t too fancy on their own. But put together, helical resonators can be grouped in a flexible array, pliable enough to cover a person’s kneecap, abdomen, head, or any part of the body in need of imaging. When the array is placed near the body, the resonators interact with the magnetic field of the machine, boosting the signal-to-noise ratio (SNR) of the MRI, “turning up the volume of the image” as Anderson says. “A lot of people are surprised by its simplicity,” says Zhang. “It’s not some magic material. The ‘magical’ part is the design and the idea.”

To test the magnetic array, the team scanned chicken legs, tomatoes, and grapes using a 1.5 T machine. They found that the magnetic metamaterial yielded a 4.2 fold increase in the SNR, a radical improvement, which could mean that lower magnetic fields could be used to take clearer images than currently possible.

Now, Zhang and Anderson hope to partner with industry collaborators so that their magnetic metamaterial can be smoothly adapted for real-world clinical applications. “If you are able to deliver something that can increase SNR by a significant margin, we can start to think about possibilities that didn’t exist before,” says Anderson, such as the possibility of having MRI near battlefields or in other remote locations. “Being able to simplify this advanced technology is very appealing,” he says.