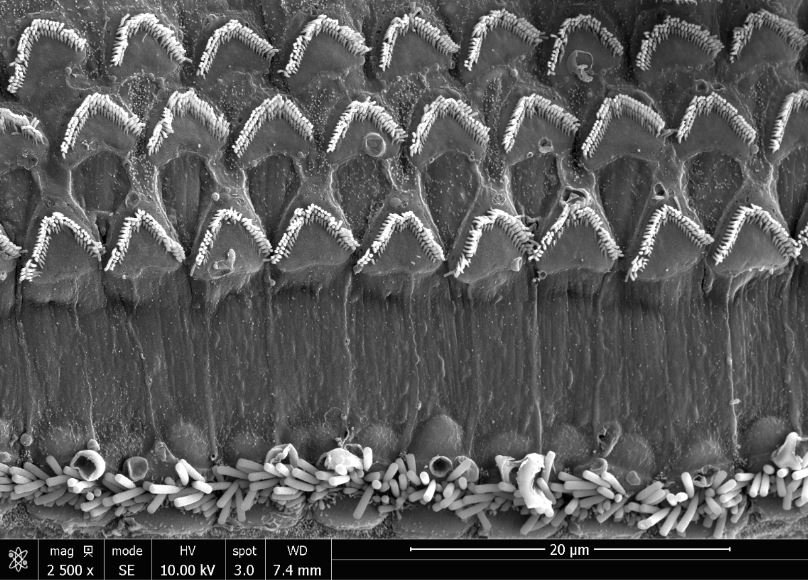 A top-down view of the cochlea in a healthy mouse, showing hair cells and support cells, which are impacted by the Gas2 gene

The researchers, whose findings are published online in Developmental Cell, discovered that the protein encoded by GAS2 is crucial for maintaining the structural stiffness of support cells in the inner ear that normally help amplify incoming sound waves. They showed that inner ear support cells lacking functional GAS2 lose their amplifier abilities, causing severe hearing impairment in mice. The researchers also identified people who have GAS2 mutations and severe hearing loss. “Anatomists 150 years ago took pains to draw these support cells with the details of their unique internal structures, but it’s only now, with this discovery about GAS2, that we understand the importance of those structures for normal hearing,” said study senior author Douglas J. Epstein, PhD, professor of genetics at Penn Medicine.

Two to three of every 1,000 children in the United States are born with hearing loss in one or both ears. About half of these cases are genetic. Although hearing aids and cochlear implants often can help, these devices seldom restore hearing to normal. One of the main focuses of the Epstein laboratory at Penn Medicine is the study of genes that control the development and function of the inner ear—genes that are often implicated in congenital hearing loss. The inner ear contains a complex, snail-shaped structure, the cochlea, that amplifies the vibrations from sound waves, transduces them into nerve signals, and sends those signals toward the auditory cortex of the brain.

A few years ago, Epstein’s team discovered that Gas2, the mouse version of human GAS2, is switched on in embryos by another gene known to be critical for inner ear development. To determine Gas2’s role in that development, the team developed a line of mice in which the gene had been knocked out of the genome and called them Gas2-knockout mice. Alex Rohacek, PhD, a former graduate student in the Epstein lab, was puzzled to observe that the Gas2-knockout mice had inner ears with cells and structures that seemed quite normal. However, the animals, when tested, turned out to be severely hearing-impaired, with deficits at high sound frequencies of up to 50 decibels—equivalent to a loss of 99.999 percent of the normal acoustic energy. Tingfang Chen, PhD, a postdoctoral fellow and co-first author on the study, determined that Gas2 is normally active within inner-ear support cells called pillar cells and Deiters’ cells. In these cells, the protein encoded by the gene binds to flexible, tube-like structures called microtubules in a way that bundles and stabilizes them, effectively stiffening the cells.

With help from the collaborating team of Benjamin L. Prosser, PhD, assistant professor of Physiology at Penn Medicine and an expert on microtubules, the researchers discovered that when pillar cells and Deiters’ cells lack Gas2, their microtubule bundles tend to come apart, dramatically reducing the stiffness of the cells. That turns out to have dire implications for hearing. Within the inner ear, pillar cells and Dieters’ cells help form the basic structure of the cochlea and serve as physical supports for cells called outer hair cells. The outer hair cells move in response to incoming acoustical vibrations—essentially to provide a crucial amplification of that sound energy. The experiments revealed that the pillar and Deiters’ cells’ loss of stiffness, due to the absence of Gas2, severely degrades the sound-amplifying properties of the outer hair cells they support. “We observed that some of Deiters’ cells in the Gas2-knockout mice even buckled under the tension of the rapid movements of the outer hair cells,” Epstein said.

The experiments included sophisticated imaging of propagating sound waves in the inner ears of live Gas2-knockout and normal mice, conducted by collaborator John Oghalai, MD, chair and professor of otolaryngology-head and neck surgery at the Keck School of Medicine of USC, and his team.

Curiously, the researchers could find no reports of GAS2-associated congenital hearing loss in the medical literature. Even when they canvassed colleagues around the world who run hearing-loss clinics, they came up empty-handed. Then one day, Hannie Kremer, PhD, professor and chair of molecular otogenetics at Radboud University Medical Center in the Netherlands, emailed Epstein. She and her team had been studying a Somalian family in which four of the siblings had severe hearing loss from early life. The affected family members had no mutations in known hearing-loss genes—but each carried two mutant copies of GAS2. The study therefore establishes GAS2 as a very probable new hearing loss gene in humans—the first one known to affect the mechanical properties of inner ear support cells.

Using cutting-edge genomic sequencing techniques, researchers at the University of Oxford have identified almost all the genomic variation that gives people resistance to 13 of the most common…

A new mechanism that stops the progression of Huntington’s disease in cells has been identified by scientists at the University of Cambridge and University College London (UCL), as part of their…