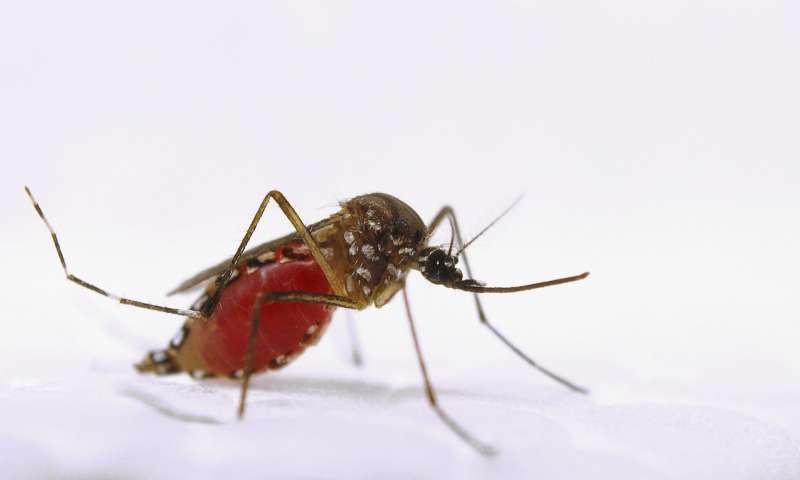 A female Aedes aegypti, a species of mosquito that carries Zika virus. Researchers found that drugs given to pets to kill fleas and ticks might be effective at stopping transmission of insect-borne diseases such as Zika fever and malaria in humans.

Medicines given to household pets to kill fleas and ticks might be effective for preventing outbreaks of malaria, Zika fever and other dangerous insect-borne diseases that infect millions of people worldwide, according to a new study led by scientists at Calibr, a non-profit drug discovery institute closely affiliated with Scripps Research and TropIQ Health Sciences, a Dutch social enterprise.

The researchers found that a class of drugs called isoxazolines, sold in veterinary products such as fluralaner (Bravecto) and afoxolaner (NexGard ) to protect pets from fleas and ticks, also kills species of disease-carrying mosquitos that feed on human blood. The research team, led by TropIQ's Koen Dechering, Ph.D. and Calibr's Matt Tremblay, Ph.D., determined via experimental studies on mosquitoes and computer modeling that giving isoxazoline drugs to less than a third of the population in areas prone to seasonal outbreaks of insect-borne diseases could prevent up to 97 percent of all cases of infection. "Insect-borne infectious diseases remain primary causes of severe illnesses and fatalities worldwide, and new approaches to preventing outbreaks of these diseases are critically needed," said Peter Schultz, Ph.D., chief executive officer of Calibr and Scripps Research. "Our findings suggest that isoxazolines might be effective at controlling outbreaks of diseases carried by mosquitos and other insects in regions with limited medical infrastructure."

Millions of people each year contract malaria, Zika fever and other insect-borne diseases that are particularly prevalent in tropical and sub-tropical regions. In 2016, an estimated 216 million people contracted malaria worldwide and 445,000 died from the disease (mostly children in the African Region), according the US Centers for Disease Control. Zika, a mosquito-borne disease that can cause birth defects in infants born to infected mothers, has spread rapidly around the planet in recent years and is now found in 90 countries.

Mosquitoes aren't the only carriers of such diseases. Leishmaniasis, caused by protozoan parasites transmitted by sandflies, is endemic to parts of Africa, South America, the Middle East and India. Though far less prevalent than malaria, forms of leishmaniasis that affect internal organs can be fatal if untreated.

"Research on insect-borne diseases has predominantly focused on control of insect populations through use of insecticides and prevention of bites through distribution of bednets, but these approaches have not been fully effective in controlling outbreaks" says Koen Dechering, CEO of TropIQ Health Sciences. "Vaccines are largely lacking for most diseases and drugs to treat people who have contracted the disease are losing efficacy because of emerging resistance."

"In many regions where seasonal outbreaks are endemic, medical infrastructure is such that delivery of medical care is on an intermittent basis."

The international research team investigated a new strategy, the possibility of giving humans isoxazolines to block transmission of diseases by insect vectors. Isoxazolines are sold in veterinary products such as fluralaner (Bravecto ) and afoxolaner (NexGard ) that protect pets from fleas and ticks. When administered orally the drugs absorb into the bloodstream and spreads throughout the animal's body, where it remains active for up to three months. While well-tolerated in dogs and cats, the drugs kill blood-sucking fleas and ticks that feed on the blood of treated animals by damaging the insects' nervous systems.

The Calibr and TropIQ scientists and their collaborators tested two of the drugs, fluralaner and afoxolaner, and found they also kill species of disease-carrying mosquitos and sand flies that feed on human blood infused with the insecticides. The drugs also were effective against insect strains that are resistant to common insecticides.

Based on existing data from studies of the drugs in animals, the researchers estimated that a single human dose of the drugs would convey an insecticide effect against mosquitos and sand flies lasting 50-90 days. "In many regions where seasonal outbreaks are endemic, medical infrastructure is such that delivery of medical care is on an intermittent basis," said Matt Tremblay, Ph.D., the chief operating officer of Calibr and Scripps Research and a senior author on the PNAS paper. "Isoxazolines could be administered prior to the beginning of seasonal disease outbreaks to convey protection until the threat diminishes at the end of the season." 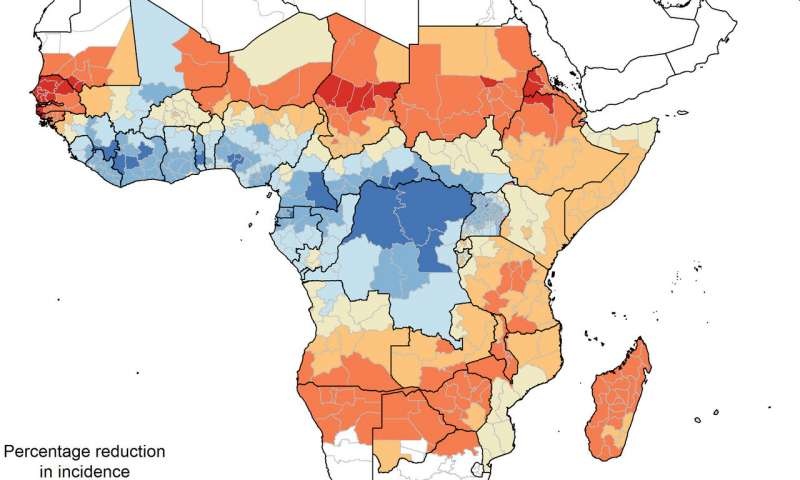 Predicted impact of mass administration of an isoxazoline drug on malaria incidence in Africa. The figure shows cumulative reduction in incidence during 2 years of fluralaner/afoxolaner mass drug administration covering 30% of the population over the age of 5, dosed once per year optimally timed in relation to the start of the transmission season.

The drugs may not work as vaccines, since a treated person could still contract a disease from an insect bite. But an insect that bites an infected person taking the drugs would die before it could transmit the disease to other people, an effect that, when multiplied over a large population, would reduce the overall number of infections.

Working with collaborators at Imperial College London, in the UK, the researcher team used computer epidemiology models to estimate that that giving the drugs to just 30 percent of the population in a region where Zika fever is common could prevent more than 97 percent of cases. Looking at malaria incidence, their modelling showed that in areas with low and very seasonal transmission, such as Senegal, Sudan, Madagascar, Namibia, Botswana and Zimbabwe, giving isoxazolines to 30 percent of the population could prevent more than 70 percent of infections.

Regions with greater numbers of cases and year-round outbreaks would see a smaller percentage reduction, but the overall reduction in these areas could be dramatic. The Democratic Republic of the Congo has 16-20 million malaria cases annually, for instance, so a 30 percent reduction would prevent as many as 6 million cases. Based on safety studies of isoxazoline use in animals, the drugs have a good chance of being safe if repurposed for human use. The research team is planning to evaluate the efficacy of the drugs in humans and anticipate these studies will take around two years.

Kill a Malaria parasite with Cholesterol

Drexel University scientists have discovered an unusual mechanism for how two new antimalarial drugs operate: They give the parasite’s skin a boost in cholesterol, making it unable to traverse the…

Stopping malaria in its tracks

A new drug acts as a roadblock for malaria, curing mice of established infection, according to a study in The Journal of Experimental Medicine. Treatment was not associated with obvious side effects,…