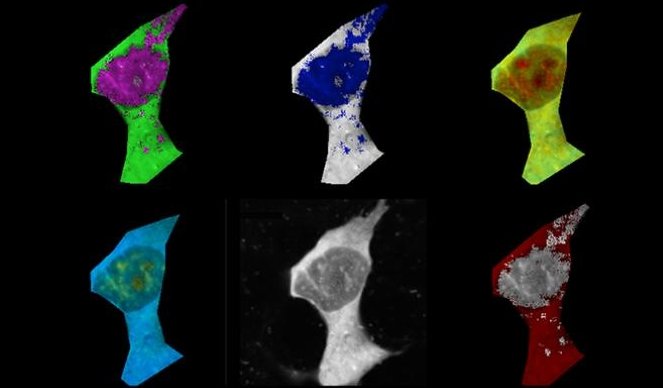 Mammalian cell stained with fluorescence polymeric thermometers and falsely-coloured based on temperature gradients.

The researchers, from the University of Cambridge, used sensors small and sensitive enough to detect temperature changes inside individual cells, and found that as amyloid-beta misfolds and clumps together, it causes cells to overheat. In an experiment using human cell lines, the researchers found the heat released by amyloid-beta aggregation could potentially cause other, healthy amyloid-beta to aggregate, causing more and more aggregates to form. In the same series of experiments, the researchers also showed that amyloid-beta aggregation can be stopped, and the cell temperature lowered, with the addition of a drug compound. The experiments also suggest that the compound has potential as a therapeutic for Alzheimer’s disease, although extensive tests and clinical trials would first be required. The researchers say their assay could be used as a diagnostic tool for Alzheimer’s disease, or to screen potential drug candidates. The results are reported in the Journal of the American Chemical Society.

Alzheimer’s disease affects an estimated 44 million people worldwide, and there are currently no effective diagnostics or treatments. In Alzheimer’s disease, amyloid-beta and another protein called tau build up into tangles and plaques – known collectively as aggregates – causing brain cells to die and the brain to shrink. This results in memory loss, personality changes and difficulty carrying out daily functions. It is a difficult disease to study, since it develops over decades, and a definitive diagnosis can only be given after examining samples of brain tissue after death. It is still not known what kind of biochemical changes inside a cell lead to amyloid-beta aggregation.

In Professor Gabriele Kaminski Schierle’s research group at Cambridge’s Department of Chemical Engineering and Biotechnology, they have been investigating the possible link between temperature and amyloid-beta aggregation in human cells. The field of studying temperature changes inside a cell is known as intracellular thermogenesis. It is a new and challenging field: scientists have developed sensors with which temperature changes can be measured, however, no one has ever tried to use these sensors to study conditions such as Alzheimer’s disease. “Thermogenesis has been associated with cellular stress, which may promote further aggregation,” said Chyi Wei Chung, the study’s first author. “We believe that when there’s an imbalance in cells, like when the amyloid-beta concentration is slightly too high and it starts to accumulate, cellular temperatures increase.”

“Overheating a cell is like frying an egg – as it heats up, the proteins start to clump together and become non-functional,” said Kaminski Schierle, who led the research.

The researchers used tiny temperature sensors called fluorescent polymeric thermometers (FTPs) to study the link between aggregation and temperature. They added amyloid-beta to human cell lines to kickstart the aggregation process and used a chemical called FCCP as a control, since it is known to induce an increase in temperature. They found that as amyloid-beta started to form thread-like aggregates called fibrils, the average temperature of the cells started to rise. The increase in cellular temperature was significant compared to cells that did not have any amyloid-beta added. “As the fibrils start elongating, they release energy in the form of heat,” said Kaminski Schierle. “Amyloid-beta aggregation requires quite a lot of energy to get going, but once the aggregation process starts, it speeds up and releases more heat, allowing more aggregates to form.”

“Once the aggregates have formed, they can exit the cell and be taken up by neighbouring cells, infecting healthy amyloid-beta in those cells,” said Chung. “No one has shown this link between temperature and aggregation in live cells before.”

Using a drug that inhibits amyloid-beta aggregation, the researchers were able to pinpoint the fibrils as the cause of thermogenesis. It had previously been unknown whether protein aggregation or potential damage to mitochondria – the ‘batteries’ that power cells – was responsible for this phenomenon.

The researchers also found that the rise in cellular temperatures could be mitigated by treating them with an aggregation inhibitor, highlighting its potential as a therapeutic for Alzheimer’s disease. The laboratory experiments were complemented by computational modelling describing what might happen to amyloid-beta in an intracellular environment and why it might lead to an increase in intracellular temperatures. The researchers hope their work will motivate new studies incorporating different parameters of physiological relevance. 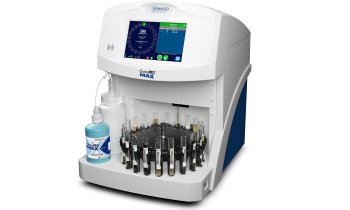