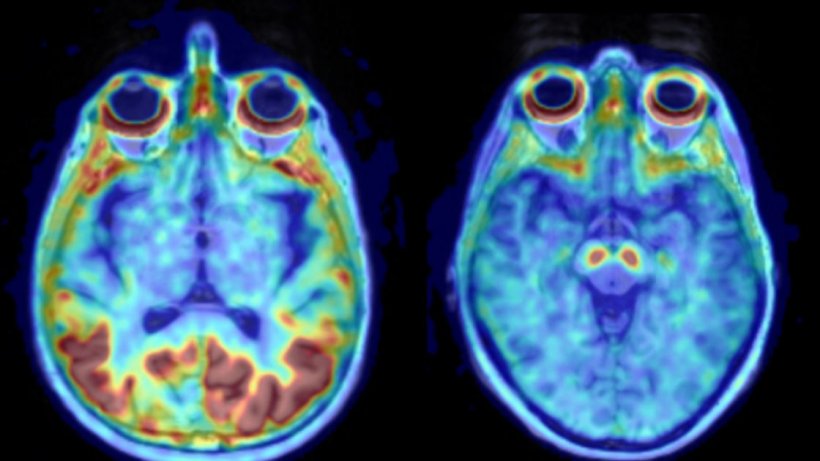 Pathological uptake of tau, to the left. A healthy brain, to the right.

The study was recently published in Brain. Over 30 million people suffer from Alzheimer’s disease worldwide, making it the most common form of dementia. Tau and beta-amyloid are two proteins known to aggregate and accumulate in the brain in patients with Alzheimer’s.

The first protein to aggregate in Alzheimer’s is beta-amyloid. Men and women are equally affected by the first disease stages, and the analysis did not show any differences in the accumulation of beta-amyloid. Memory dysfunction arises later, when tau starts to accumulate. More women than men are affected by memory problems due to Alzheimer’s, and it was for tau that the researchers found a higher rate of accumulation in women. “Tau accumulation rates vary greatly between individuals of the same sex, but in the temporal lobe, which is affected in Alzheimer’s disease, we found a 75% higher accumulation rate in women as a group compared to men,” explains Ruben Smith, first author of the study.

Our study strongly indicates that the faster spread of tau makes women more prone to develop dementia because of Alzheimer’s pathology compared to men. Future experimental studies will be important to understand the reasons behind this

The accumulation of tau is faster in patients who already have a pathological accumulation of beta-amyloid, and are in the early phase of the disease. The discovery that the accumulation rate of tau is higher in women remained even after adjusting for age and the levels of tau they had at the beginning. Together with data from three similar cohorts in the USA, the project contains 209 women and 210 men. “The next step would be to examine why this accumulation is faster in women,” says Sebastian Palmqvist, the researcher responsible for the cognitive assessment of the patients.

The study did not investigate the reasons for the higher rate of tau accumulation in women. “Our study strongly indicates that the faster spread of tau makes women more prone to develop dementia because of Alzheimer’s pathology compared to men. Future experimental studies will be important to understand the reasons behind this,” concludes Professor Oskar Hansson.

Researchers at Durham University are working on a new infrared light therapy that might have the potential to help people with dementia. In the approach, people wear a specially adapted helmet which…

Alzheimer's: finding the cause of toxic clumps

Small aggregates of proteins known as Aβ oligomers are suspected as the main cause for the development of Alzheimer’s disease. However, it is not yet clear where and under what conditions these…