The study leader Chris Rodgers, Associate Professor of Biomedical Imaging at the University of Oxford, explained that the latest work builds on findings from Professor Stefan Neubauer, the head of the Division of Cardiovascular Medicine, who showed in the 1990s that dilated cardiomyopathy is associated with depleted energy reserves inside the muscle cells of the heart. Neubauer measured this using phosphorus magnetic resonance spectroscopy on a 1.5-T MRI scanner.

More recently, the Oxford unit took delivery of an MRI scanner operating at a magnetic field-strength of 7-T – only the second 7-T system in the UK, and the only cardiac-capable 7-T system in the country - made by Siemens Healthineers. This was used in conjunction with a radiofrequency coil made by Rapid Biomedical GmbH. ‘Our study was designed to show the feasibility of scanning cardiac patients in this new machine, and to show that we have much greater ability to monitor the phosphorus metabolites in the heart responsible for energy delivery,’ Rodgers explained. ‘This is part of a programme of work to deliver cutting-edge methods to monitor cardiac metabolism, primarily using the Oxford 7-T MRI scanner. ‘We intend to use these methods in forthcoming clinical studies of other cardiomyopathies, diabetes, and to monitor the effects of new drugs designed to treat heart failure.’

His team performed phosphorus magnetic resonance spectroscopy to record the concentrations and rates of generation/consumption of phosphate metabolites in ~60mL volumes at regular intervals across the chest. 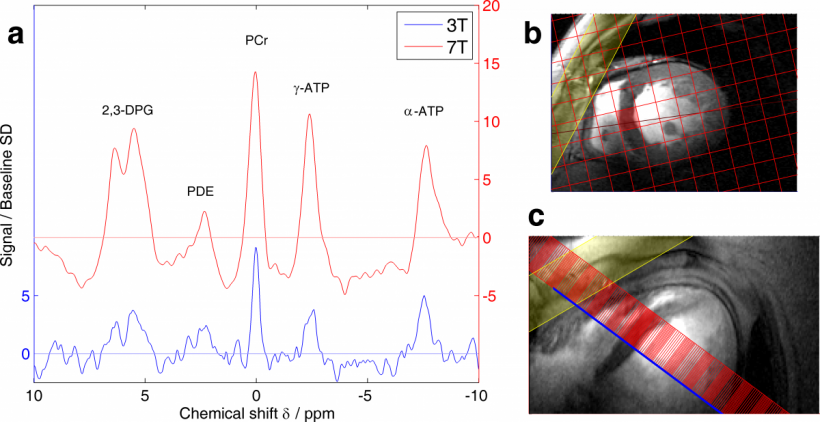 Figure A, Graph shows comparison of spectra in a typical patient (57-year-old woman) at 3 T and 7 T. These spectra have had a matched filter applied and have been normalized to mean baseline noise, so the PCr peak height is, by definition, the PCr SNR. Increase in SNR at 7 T is readily apparent. B, Corresponding mid-short axis localizer image acquired at 7 T. C, Corresponding four-chamber localizer image acquired at 7 T. The spectrocopy matrix is overlaid in red, and the voxel plotted in A is highlighted. The yellow-shaded region denotes the regional saturation slab used to suppress signal from overlying skeletal muscle.
Rogers/Radiology

Taking less than an hour in an MRI scanner equipped with special hardware for phosphorus measurements, the 7-T scans showed a marked improvement against 1.5-T and 3-T results, whose quality has previously prevented the wider uptake of phosphorus spectroscopy methods. ‘We have seen a 2.6 times improvement in data quality at 7-T compared to 3-T,’ the professor added. ‘This translates into being able to acquire the same quality data in five minutes that previously took 30 minutes, or into being able to use a finer spatial resolution, or into being able to measure other metabolites, such as inorganic phosphate which occur at lower concentrations in the body and were not visible in our scans.’

In the healthy heart, the concentration ratio of phosphocreatine (PCr) – the primary energy buffer of heart muscle cells - to adenosine triphosphate is approximately 2:1. ‘In the failing heart,’ Rodgers added, ‘the concentration ratio drops to around 1.5:1. We measured this change in our group at 3-T and 7-T. The more sensitive 7-T experiment, in theory allowed us to detect changes in less severe cases of dilated cardiomyopathy than in the cohort we studied.’

Whilst still at the basic research stage, Rodgers believes the primary impact on patient treatment is that these more sensitive measurements facilitate trials of new treatments such as new drugs, devices, or lifestyle modifications, because the imaging can detect smaller improvements or deteriorations in the heart’s metabolic status than were previously visible. ‘It ought to be possible to detect earlier improvement in response to treatment, and to quantify the relative merits of different treatments more accurately,’ he said. ‘We are also planning studies to understand the interplay between heart disease and disease in other organs, e.g. type II diabetes, or obesity. ‘Having treatments that have been based on a more rigorous understanding of the heart’s biochemistry will hopefully mean they will be more effective at treating heart disease.’

Research centres and teaching hospitals will also benefit, with the new approach helping improve understanding of the heart’s metabolism in clinical studies.

Profile:
Chris Rodgers is an Associate Professor of Biomedical Imaging in the Division of Cardiovascular Medicine at the University of Oxford and a Supernumerary Fellow and Stipendiary Lecturer in Physical Chemistry at Merton College, Oxford. His research – funded by his Sir Henry Dale Fellowship from the Wellcome Trust and the Royal Society – focuses on developing new methods for 31P magnetic resonance spectroscopy and using Oxford’s new 7-Tesla scanner and 3-T.

CIED patients can have MRI examinations

Much has changed for medical device manufacturers. Take scanner development; whereas the aim has long been to increase multi-slices, produce higher field strengths and sharper images, optimise the…

The ascent of image-guided surgical interventions