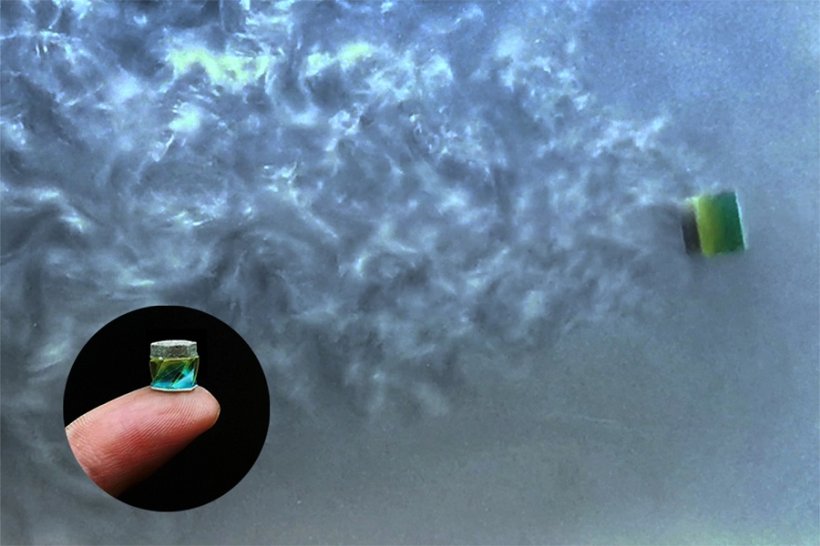 If you’ve ever swallowed the same round tablet in hopes of curing everything from stomach cramps to headaches, you already know that medicines aren’t always designed to treat precise pain points. While over-the-counter pills have cured many ailments for decades, biomedical researchers have only recently begun exploring ways to improve targeted drug delivery when treating more complicated medical conditions, like cardiovascular disease or cancer.

A promising innovation within this burgeoning area of biomedicine is the millirobot. These fingertip-sized robots are poised to become medicine’s future lifesavers – to crawl, spin, and swim to enter narrow spaces on their mission to investigate inner workings or dispense medicines.

Leading research in this field, Stanford University mechanical engineer Renee Zhao is working on many millirobot designs at once – including a magnetic crawling robot, which was recently seen worming its way through a stomach on the cover of Science Advances. Powered by magnetic fields – which allow for continuous motion and can be instantly applied to generate torque and change the way the robots move – her robots can self-select different locomotive states and overcome obstacles in the body. Just by shifting the strength and orientation of the magnetic field, Zhao’s team can send the robot sailing across the body at distances in a single leap that are 10 times the robot’s length.

A key aspect of her research, the magnetic actuation also provides untethered control for non-invasive operation and separates the control unit from the device to allow for miniaturization. Zhao said their most recent robot, featured this month in Nature Communications, is “the most robust and multifunctional untethered robot we have ever developed.”

This new “spinning-enabled wireless amphibious origami millirobot” is as multifunctional as its name implies. It’s an elegantly conceived single unit that’s able to speedily travel over an organ’s slick, uneven surfaces and swim through body fluids, propelling itself wirelessly while transporting liquid medicines. Unlike pills swallowed or liquids injected, this robot withholds medicine until “it reaches the target, and then releases a high-concentration drug,” said Zhao, who is an assistant professor of mechanical engineering. “That is how our robot achieves targeted drug delivery.”

What’s groundbreaking about this particular amphibious robot, according to Zhao, is that it goes beyond the designs of most origami-based robots, which only utilize origami’s foldability to control how a robot morphs and moves.

On top of looking at how folding could enable the robot to perform certain actions – imagine an accordion fold that squeezes out medicine – Zhao’s team also considered how the dimensions of each fold’s exact shape influenced the robot’s rigid motion when it was not folded. As a result, the robot’s unfolded form inherently lends itself to propulsion through the environment. Such broad-minded considerations allowed the researchers to get more use out of the materials without adding bulk – and in Zhao’s world, the more functionality achieved from a single structure within the robot’s design, the less invasive the medical procedure is.

Another unique aspect of the design of the robot is the combination of certain geometrical features. A longitudinal hole into the robot’s center and lateral slits angled up the sides reduced water resistance and helped the robot swim better. “This design induces a negative pressure in the robot for fast swimming and meanwhile provides suction for cargo pickup and transportation,” Zhao said. “We take full advantage of the geometric features of this small robot and explore that single structure for different applications and for different functions.”

Based on conversations with Stanford Department of Medicine experts, the Zhao Lab is considering how to improve upon current treatments and procedures by building new technologies. If this work goes Zhao’s way, her robots won’t just provide a handy way to effectively dispense medicine but could also be used to carry instruments or cameras into the body, changing how doctors examine patients. The team is also working on using ultrasound imaging to track where robots go, eliminating any need to cut open organs.

The smaller, simpler, the better

While we won’t see millirobots like Zhao’s in real health care settings until more is known about optimal design and imaging best practices, the lab’s first-of-its-kind swimmer highlighted in Nature Communications is among their robots that are furthest along. It’s currently in the trial stages that come before any live animal testing that proceeds human clinical trials.

In the meantime, Zhao’s team continues combining a variety of novel smart materials and structures into unique designs that ultimately form new biomedical devices. She also plans to continue scaling down her robots to further biomedical research at the microscale.

As an engineer, Zhao strives to develop the simplest structures with the most functionality. Her amphibious robot exemplifies that mission, as it inspired her team to more fully consider geometric features not yet commonly prioritized by other origami robot researchers. “We started looking at how all these work in parallel,” Zhao said. “This is a very unique point of this work, and it also has broad potential application in the biomedical field.”

Targeting medical treatment to an ailing body part is a practice as old as medicine itself. A Band-Aid is placed on a skinned knee. Drops go into itchy eyes. A broken arm goes into a cast. But often…

New stents for the future

Drug-eluting stents to treat narrowed coronary vessels met with sensational success, and then things became rather quiet. Now, two new developments from Cordis and Biotronik are being tested at Essen…

The 27th World Congress of Endourology