Professor Marc Dewey, Vice Chair of the Department of Radiology at Charité – Universitätsmedizin Berlin, made value-based radiology the main theme of the Wilhelm Conrad Röntgen Honorary Lecture during ECR 2018. Radiology practice needs change, he said, and radiologists should grasp at new technology to drive their future. His lecture was summarised in a recent comment in The Lancet.

Dewey’s lecture presented a list of issues regarding current healthcare systems. Among foremost patients’ complaints on hospital admittance is being asked about their medical history multiple times from different staff members or departments. Also, patient care services that decide the clinical strategy and tests to be made have conflicts of interests and different aims. ‘We’re not using evidence-based approaches to make those decisions,’ Dewey said. Additionally, the idiosyncratic terminology in radiologists’ reports prevents major critical findings from being detected. According to Dewey, a recent study on determination and communication of critical findings in abdominal imaging found that one-third of it went undetected (https://www.ncbi.nlm.nih.gov/pubmed/19581643).

A vision of the future

Dewey spoke of a Commonwealth Fund study that concluded that increasing healthcare spending per GDP does not equate to better patient outcomes, or the performance of the healthcare system measured by equity and accessibility. Reality: the more money nations invest in their health care system, the worse the outcome in terms of performance is – a really dramatic result and reason to introduce value-based medicine in radiology, he said. The general goal of ­value-based radiology is to improve patient outcome with lower cost. ‘Sometimes that means doing less – especially less imaging.’

Value-based radiology, he believes, will gain a central role in addressing three issues: 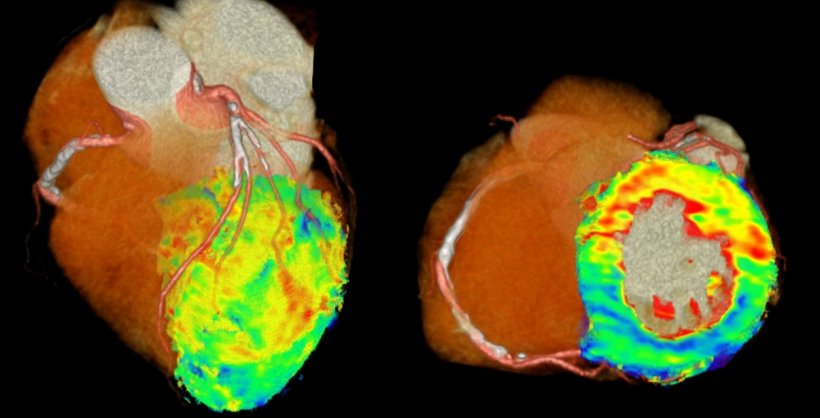 First: Decision support tools, based on evidence, could help to overcome too much imaging in the wrong patients. AI tools would allow better predictions and free up radiologists’ time to talk to a patient. This needs a patient’s data integration with decision support tools, such as the European Society of Radiology’s iGUIDE and eGUIDE.

Second: The integration of AI with human efforts – the ‘bionic radiologist’ – has great potential to increase consistency in radiological image analysis and reduce errors.

Dewey foresees a human doctor using a device to gain an automated analysis and then interpreting the results and strategies along with a patient. An existing example is 4D-CT of the heart, which produces three billion voxels for a single patient (Figure 1). Patients can’t hold their breath for long, so there’s heart and lungs motion. Can we manually adjust? Can we go through these three billion voxels? That’s very hard to achieve.’ Dewey then explained that radiologists need automated approaches that do registration and pre-processing before a doctor even begins. Figure 2 shows such a pre-processing example of automatic coronary tree segmentation based on 3D cardiac CT.

The bionic radiologist makes use of automated pre-processed data, e.g. using fractal analysis (https://www.ncbi.nlm.nih.gov/pubmed/27436024) while still being the major interpreter and integrator of the data (see Figure 3). This combined approach to leverage both the consistency of automatic analysis and individual interpretation of human image analysis ‘is a paradigm shift,’ Dewey said.

‘Everyone wants to be an innovator, yet no one wants to change,’ he said, adding that addressing cultural issues is also important in changing radiologists’ practice. But, for Dewey, the ‘potentially greatest challenge is the half-life of clinical data’. A study on test order prediction tools found that the accuracy of data to predict inpatient orders has a half-life of only four months (https://www.ncbi.nlm.nih.gov/pubmed/28495350).  As healthcare changes rapidly, researchers won’t be able to use robust data older than five years. Thus, says Dewey, ‘we don’t need big data; we need good data!’ Success in the three listed areas will free the radiologist to participate more actively in patient care, where automated systems are not good (yet).

The ascent of AI in thorax-CT

As a highly innovative medical specialisation, radiology increasingly takes advantage of the possibilities offered by artificial intelligence (AI). Yet, there is no risk for the future of the…

AI-based diagnosis is undoubtedly one of the most promising subjects when we talk about the future of radiology. Now, a couple of new studies indicate that most radiologists are open to using the…