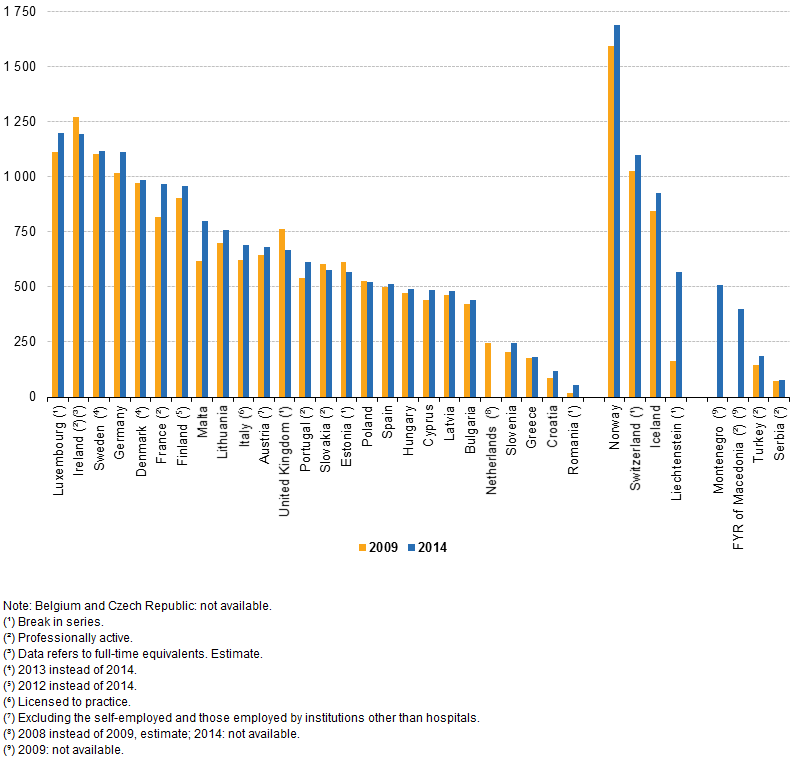 Practicing physicians 2009 and 2014 per 100,000 inhabitants in the EU. The Eurostat update from January 2017 reported that Malta boasted a large
increase in nursing professionals in contrast to Poland, Ireland and Slovakia
which manifested a decline.

A recent BBC analysis (February 2017) showed that overcrowding afflicted 9 out of 10 NHS hospitals this winter, with 23 declaring ‘black alerts’, as other European hospitals face similar ‘care crises’, especially member states such as Greece, with their ever declining health budgets. (Euronews, January 2017)

The Maltese Islands have not been spared the deluge: overcrowding is among main challenges and priorities to the local health sector.

A senior nurse manager of the hospitals maps out the factors she believes are the main culprits for this phenomenon. She claims that, although we have long been aware of the rising age of the population, compounded with the sociocultural shift featuring more working women and smaller nuclear families, not enough has been and is being done to counteract the state of affairs.

As a result of this drastic decline in the availability of support from extended family, mainly due to lifestyle pressures, neglect or debilitating disease, most elderly citizens depend heavily on healthcare systems with acute care wards being blocked by social cases especially since, at present, the hospital administration has no jurisdiction to impose care on family members.

Another factor that greatly influences turnover of patients, especially in accident and emergency (A&E) departments, is inappropriate use of service. Unfortunately, A&E is still inundated with patients suffering minor or chronic ailments, in the hope of gaining a faster transit to necessary investigations and treatment. The senior nurse stresses the importance of educating patients in the correct use of facilities and triaging systems linked with a more efficient set-up between hospital and community networks as a means of counteracting unnecessary pile-ups in a unit where lack of efficiency can easily result in loss of life. Overcrowding, both in A&E and other departments, also results in chaos, decreased efficiency, increased risk of infections and a great challenge to the nurse/patient ratio. Luckily in Malta, this is still at 1:5 and 1:8 during the night. In fact the most recent Eurostat update (January 2017) reported that Malta boasted ‘by far the largest increase in nursing professionals... (with) 180 more professionally active nurses per 100,000 inhabitants in 2014 than five years earlier’, in contrast to Poland, Ireland and Slovakia which manifested a decline.

The senior nurse believes that a functional set-up between hospital and community networks can also render discharge of patients in the community more efficient, taking into account not only the condition at hand but also their general physical, mental and social well-being. Thus supported, the patient, especially in the elderly bracket, is less prone to be re-admitted, at times in a worse state of health. At the hospital this role is currently being carried out by the Discharge Facilitation Team with Discharge Liaison Nurses, where the latter also cater for intravenous antibiotics at the patient’s home, thus avoiding the need of hospital admission. Other measures taken by the hospital in supporting decentralisation of patient care include the twilight shift that allows certain treatments, such as renal dialysis, to be carried out during the evening, thus reducing the time off work for patients and overwhelming of the unit’s resources during the day, evening out-patient sessions, late night radiology services, the Medical Investigations and Treatment Unit (MITU) that caters for patients in need of specialist care on an out-patient basis and a post-op helpline for minor surgery patients.

Specialist nurses, called Practice nurses in Malta, are also providing outreach services in the community. These include services for homebound patients, such as wound care, clinical nutrition and continence services. These systems must ideally be continuously revised and improved on to become viable and then emulated by other departments to promote further the efficient functioning of the hospital. Whatever measures are taken to curb overcrowding in health systems, none can hold unless a multi-team approach is embraced within and without the healthcare framework. Every healthcare stakeholder, including the patient, must have a say and subsequently take responsibility for his/her contribution to the system.

Likewise, overcrowding cannot be considered as one of the heaviest bucks in a healthcare department, but a matter of national concern where every citizen, be it student, employer, parent or policy maker alike, considers what needs to be done to safeguard our health and the systems that protect it. Only then can the proverbial eggs be distributed more evenly and not crowded in the healthcare basket.

A newly constructed 220-bed hospital, with 11 operating theatres, an entirely new IT infrastructure and with 1,200 employees, all fully operational and able to provide a comprehensive range of…

Preanalytical challenges and their clinical impact in point-of-care testing

The European Society for Emergency Medicine (EUSEM) held their annual congress on October 27th to 31st, 2021 in the city of Lisbon, to promote education, training and research in European acute care.

News • 'Meteorite impact in the brain'

When every minute counts: A Swiss team is currently developing a diagnostic procedure that can be used to start a tailored therapy for acute stroke in a timely manner.