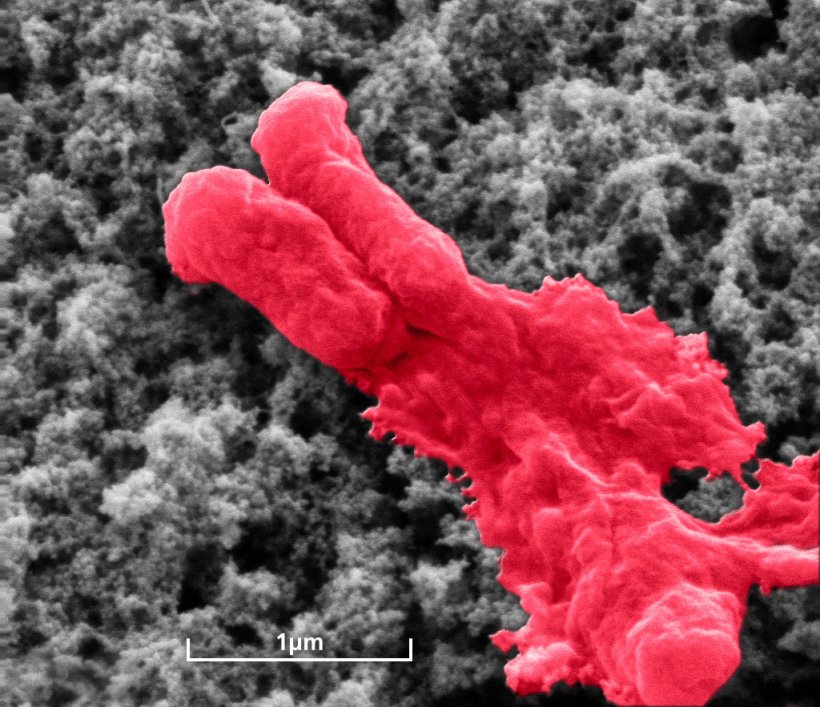 Every step is painful – there’s no getting around a new artificial hip joint. But such operations carry the risk of bacteria getting into the wound and developing into severe infections. Normally these are treated with antibiotics. However, some germs are resistant to certain antibiotics, and administering a strong enough dose of oral or intravenous antibiotics to eliminate all the pathogens on the implant is often impossible. The implant becomes unstable and needs to be replaced. Just how can another infection be avoided?

As part of the “Synergy-Boost” project, researchers at the Fraunhofer Institutes for Manufacturing Technology and Advanced Materials IFAM, for Molecular Biology and Applied Ecology IME, for Cell Therapy and Immunology IZI, and for Toxicology and Experimental Medicine ITEM have together developed a technique for preventing further infection. “We apply the antibiotic needed directly to the second implant – bringing it right to the spot where it’s needed,” says Kai Borcherding, a scientist at Fraunhofer IFAM. “We also did research on how antibiotics and silver ions work synergistically, significantly increasing the efficacy of the drug.” While both the antibiotic and the silver ions can eliminate pathogens, their combined effect is much stronger than the sum of their individual effects – they reinforce each other.

Silver ions have long been known to substantially enhance the effect of antibiotics, but research into the mechanism has been limited to isolated experiments. The optimal ratio of silver ions to antibiotic molecules is dependent not only on the drug used, but also on which microorganism is to be killed. The researchers at Fraunhofer IME initially performed large-scale screenings. They investigated 20 different antibiotics with various ratios of silver ions and on four key pathogens – a total of more than 9000 tests – to identify the most effective combinations.

If patients suffer from an infection and need a new hip joint or a new dental implant, the first thing the physician will do is to generate an antibiogram. Suitable sample material is taken, the microorganisms from it are cultivated and then analyzed to identify the appropriate antibiotic. This is a standard procedure. The physician then applies the appropriate antibiotic directly to the implant. “At Fraunhofer IFAM, we have already investigated how the antibiotics can be stored,and developed various coating methods to do this,” says Borcherding. The researchers have found a way to structure the surface so that it absorbs the antibiotic. In a vacuum, they apply the coating containing silver to the surface of the implant. Development of the coating process is now complete. Researchers at Fraunhofer IZI and Fraunhofer ITEM must now verify its efficacy. Researchers at Fraunhofer ITEM are also preparing the documentation required for approval of medical devices.

The scientists in the “Synergy-Boost” project are also attempting to answer a further question: Which natural substances from plants or trees might be suitable for synthesizing new antibiotics? The first results from Fraunhofer IZI are promising, but it will take several years before such antibiotics are ready for clinical trials.

Customizable to individual patients and requiring less than 10 minutes to prepare and use, new surgical implant coating prevented 100% of infections in mice.

A newly discovered structure of chain-mail may explain the success of C.difficile at defending itself against antibiotics and immune system molecules.