Like a pirate hijacking a ship, a virus takes control of an infected cell because every virus depends on the resources and molecular machines of the cell to multiply. This also applies to SARS-CoV-2, the causative agent of the COVID-19 pandemic. Researchers have now discovered a mechanism that the coronavirus uses to favor the production of its proteins over the cell’s own ones. This mechanism leads to the cells greatly reducing the production of their own proteins, and instead producing almost only viral proteins. This not only boosts the production of new viruses, but also inhibits the immune response against the corona infection.

The scientists published their findings in the journal Nature Structural & Molecular Biology.

After the virus has entered a human cell during a SARS-CoV-2 infection, the viral protein NSP1 is produced as one of the first viral proteins. It was already known from other corona viruses that NSP1 inhibits the production of the cell's own proteins, but it was not yet clear how this occurs. The collaborating groups from ETH Zurich and the University of Bern have now discovered how NSP1 inhibits cellular protein production. This work complements the independently obtained results on a related topic that were recently published by a research team in Germany.

Ribosomes are the cellular machines that produce proteins. They read the blueprint, the so-called messenger RNA, for a given protein and assemble the amino acids in the corresponding order. During reading, the messenger RNA passes through a channel on the ribosome. The researchers could show that NSP1 binds to this channel and thus blocks the ribosome. Using cryo-electron microscopy, the binding site of NSP1 in the ribosome channel could be elucidated at atomic resolution. “This detailed image provides important information for potential design of a drug that can prevent NSP1 binding without interfering with ribosomal function. If NSP1 can no longer interact with the ribosome, this allows activation of cellular defense systems that can stop viral replication,” explains Nenad Ban, Professor for Molecular Biology at ETH Zurich and co-author of the study. 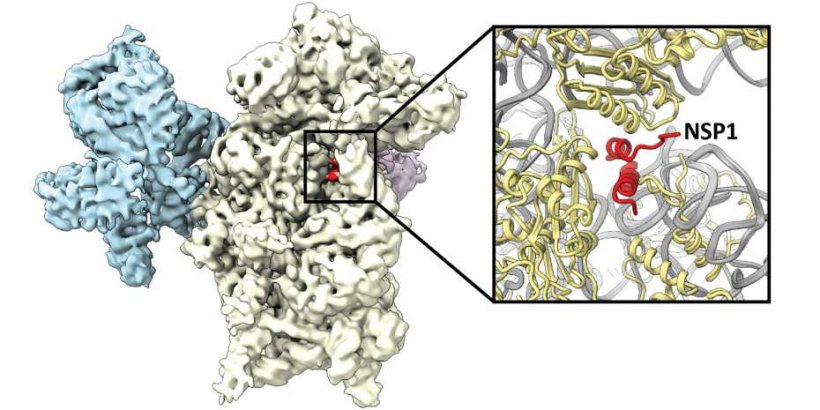 Using biochemical and cellular experiments, the researchers were able to show that NSP1 alone is sufficient to inhibit protein production. Based on the detailed picture of the binding mode of NSP1, the researchers were able to produce modified NSP1 variants that have lost their inhibitory effect. SARS-CoV-2 viruses with such inactive variants of the NSP1 protein will likely be attenuated that they can no longer cause severe disease. Such attenuated viruses can potentially be used as a vaccine, a principle on which many other vaccinations against viral diseases are already based.

The researchers were also interested in the question why the viral proteins are produced in large quantities despite the inhibition of ribosomal function by NSP1. They found out that the viral RNA has unique properties because of which it is read very efficiently by ribosomes compared to cellular messenger RNAs. "By NSP1 blocking ribosomes, functional ribosomes become scarce and at the same time viral RNA can make up almost half of the total RNA in the cell. Under these conditions, the viral RNA is preferentially read from the still functional ribosomes compared to the cell's own messenger RNA," explains Oliver Mühlemann, Professor of Biochemistry at the University of Bern and co-author of the study.

Only a few months have passed from the start of the research project to publication. "The complementary expertise of the researchers involved allowed for very fast and efficient progress in this project," says Oliver Mühlemann. All three participating research groups are part of the National Center of Competence in Research (NCCR) RNA & Disease, which is funded by the Swiss National Science Foundation as well as the University of Bern and ETH Zurich. The three research groups will continue to closely collaborate to gain further insights into how SARS-CoV-2 manipulates the cell in its favor.

Scientists have grown beating heart cells to attempt to identify drugs to prevent Covid-19-related heart damage. Concerns over the extent of cardiac damage among Covid patients emerged during the…

How SARS-CoV-2 reprograms human cells to their own benefit

Coronavirus researchers under Prof. Rolf Hilgenfeld of the University of Lübeck and Dr. Albrecht von Brunn of the Ludwig-Maximilians University of Munich discovered how SARS viruses enhance the…