Imaging is increasingly useful in detecting colorectal cancer (CRC) liver metastases and evaluating how these lesions respond to treatment. Dr Daniele Regge reviewed all the latest advances during last September’s Madrid meeting of the European Society of Medical Oncology (ESMO) 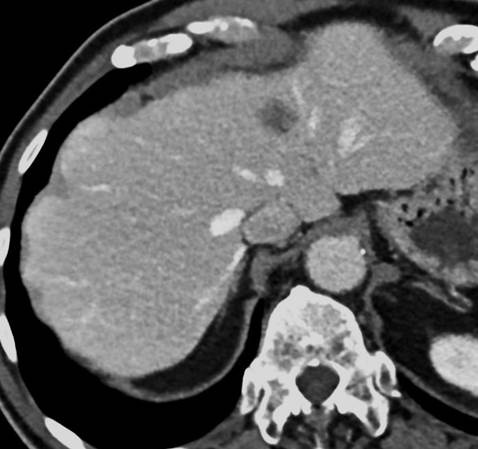 81 year old male with adenocarcinoma of the sigmoid colon and syncronous liver metastases. A CECT scan shows a hypodense lesion in the 4th segment of the liver.

A large majority of colorectal cancer (CRC) induced metastases will develop only in the liver, an organ that has long challenged radiologists. ‘77% of all CRC metastatic patients have liver-only metastases and complete surgical removal of these lesions is the only treatment option that provides the best opportunity for long-term survival in 30% of patients,’ said Daniele Regge, associate professor at Turin University and director of the radiology unit at the Candiolo Cancer Institute, Italy.

However not all patients are candidates for surgery, at least not as an initial therapy. To select candidates appropriately, doctors rely on imaging techniques, he explained. ‘Imaging is the first stop to select which patients may benefit from surgery from those needing chemotherapy.’

Contrast-enhanced CT (CECT) is usually performed as a first test to detect and characterise metastases. But MRI is increasingly used as a complementary examination for those lesions that remain uncertain, or simply to pick up more lesions. Many studies have compared diagnostic accuracy of MRI and CECT to detect liver metastases. One randomised study that specifically compared the value of hepatocyte-specific gadoxetic acid enhanced MRI and CECT (Thomas D Vreugdenburg et al., International Journal of Colorectal Disease 2016) offered interesting results on both modalities’ reliability.

Although the authors did not notice any major difference in picking up lesions, using CECT or MRI altered surgical planning in significantly distinctive proportions. ‘If you had a diagnostic pipeline with MRI, the change in surgical planning would be 20%,’ Regge explained. ‘But if you used CT, change would be observed in almost 50% of patients. These results prove that liver MRI is better at fulfilling the ultimate role of imaging to identify suitable patients for surgery – despite being expensive.’

In particular, the combination of diffusion-weighted MRI (DWMRI) and gadoxetic acid agents boosts sensitivity up to 95%. Radiologists may also use hepatospecific agents, for instance Gd-BOPTA and Gd-EOB-DTPA, to help them characterise lesions. ‘Using agents provides increased lesion conspicuity on T-1-weighted images, because metastatic lesions maintain their native dark signal while the liver becomes much more enhanced,’ Regge added.

Another study focusing on PET/CT (Eur J Nucl Med Mol Imaging 2015 Jan) showed that the incidence of extra hepatic disease detected only by PET was 32%. PET also led to change in patient management in 24% of cases. ‘There is no solid evidence yet showing that PET should be used in tumour response, but probably it should be indicated in patients with a high risk of extra hepatic disease, for example BRAF+, or in patients with unclear resectable liver metastases,’ Regge said.

For patients with unresectable metastases who will undergo conversion therapy, imaging will also help detect potential remaining lesions or their reduction after chemotherapy, and help decide whether subsequent surgery can be performed, or not. Regge strongly recommends performing MRI in these patients because CT will not reveal some of the chemo-induced changes. ‘On CT, post-therapy metastases often have reduced contrast in respect of the liver and ill defined borders. This is the consequence of tumour size shrinking to sub-centimetre diameters and drug-induced steatosis, which modifies the imaging aspect of the liver parenchyma,’ he explained.

Additionally, intraoperative ultrasound (IOUS) or contrast-enhanced IOUS may be performed before surgery. Regge went on sharing results that highlight MRI’s added value in detecting and characterising CRC liver metastases. A study published in Annual Surgical Oncology in 2012 concluded that MRI was more sensitive than FDG PET/CT, after analysing 39 articles conducted in 1989 patients and 3854 liver metastases.

Research also showed that gadoxetic-acid enhanced MRI had an overall sensitivity of 97% compared to 72% for MDCT in the detection of metastases smaller than 1cm in fatty liver. Last but not least, DWMRI and CEMRI picked up previously unspotted metastases on CT and detected the largest disappearing lesion on CT.

Disappearing liver metastases (DLM) are an important issue to consider in treated patients, Regge explained. Seven to 37% of patients who have undergone neoadjuvant therapy for CRC have one or more DLM; and, in 35 to 80% of DLM’s resected areas, viable tumour cells are found. 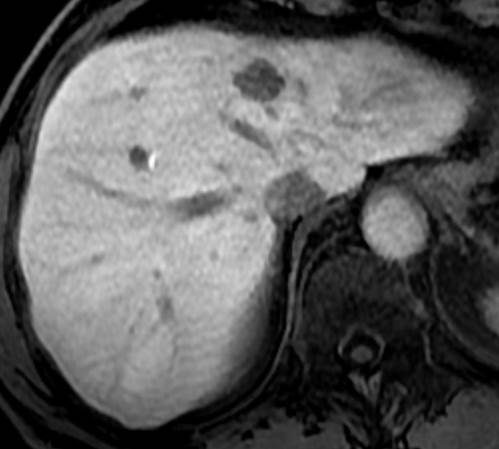 81 year old male with adenocarcinoma of the sigmoid colon and syncronous liver metastases. Delayed MR imaging after IV administration of gadoxetic acid shows that the metastasis maintains its dark signal while the liver becomes more enhanced.

‘It’s not time to wait and see for DLM in CRC cancer. Complete radiological response correlates poorly with a complete pathological response. Recurrence after conservative management of liver metastases is observed in 33 to 74% of the cases. So it is advisable to resect or ablate the area of the DLM, considering the high microscopic residual disease rates at these sites.’

Here again, evidence of MRI’s role piles up. A paper (Use of imaging to predict complete response of CRC liver metastases after chemotherapy, MRI vs. CT. Min Jung et al, Radiology 2017) recently showed that positive predictive value of MRI for absence of tumour was almost 80% compared to 35% for CT.

Imaging can also help detect DLM during surgery. IOUS enabled detection of 39% of all 67% detected DLM during laparotomy, compared to 6% by macroscopic liver examination. RECIST criteria help evaluate treatment response to medical therapy in fit patients with unrestectable disease, but these criteria are limited since they are based solely on anatomical one-dimensional tumour size. Moreover, according to Regge, significant variability in the measurements is observed.

‘Tumour variations do not occur in uniform and symmetrical ways, and structural variations of the neoplastic tissue, such as necrosis, presence of inflammatory tissue, cavitation or changes in vascularisation are not frequently associated with dimensional variations. In addition, new molecular target agents and locoregional therapies induce tumour growth inhibition or lesion necrosis rather than tumour regression,’ he said. Although interesting PET research has shown that any type of morphological change probably implied there was treatment response, very few studies have assessed response with anything other than RECIST.

Mixed tumour response is an additional issue, and doctors need tools such as liquid biopsies, to integrate all the concerns. ‘We are just at the beginning. The future is to put everything together: imaging data, genomics, everything we have.’

Daniele Regge is associate professor of radiology at the University of Turin and director of the radiology unit at the Candiolo Cancer Institute, Italy. From 2015-2017 he was president of the European Society of Oncologic Imaging. His main research focus falls on gastrointestinal and abdominal radiology and on assessment of tumour response to therapy. He is familiar with the most important radiological procedures such as magnetic resonance imaging, computed tomography and virtual colonoscopy, with a focus on oncology imaging.

Using functional MRI with inhaled xenon gas, researchers have identified that long COVID symptoms are related to microscopic abnormalities that affect how oxygen is exchanged from the lungs to the…