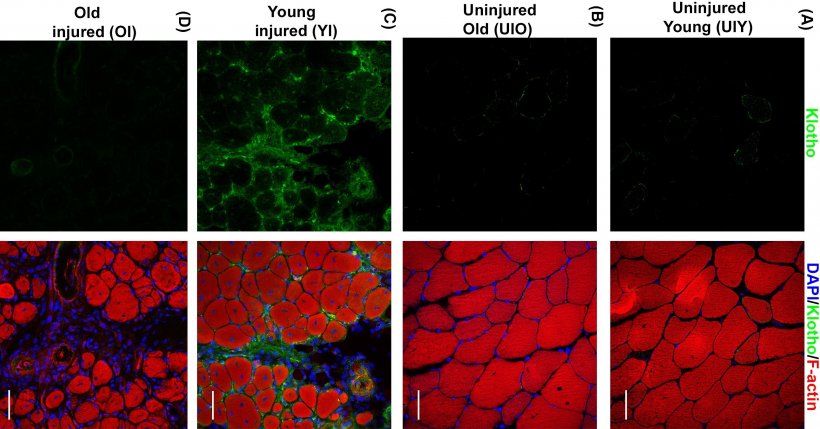 Klotho (green) is expressed around an injury site in muscle tissue (red) in young mice.

We saw functional levels of muscle regeneration in old animals that paralleled those of their young counterparts, suggesting that this could potentially be a therapeutic option down the road

The paper, published this week in Nature Communications, showed that, in young animals, Klotho expression soars after a muscle injury, whereas in old animals, it remains flat. By raising Klotho levels in old animals, or by mitigating downstream effects of Klotho deficiency, the researchers could restore muscle regeneration after injury. “We found that we were able to rescue, at least in part, the regenerative defect of aged skeletal muscle,” said lead author Fabrisia Ambrosio, Ph.D., director of rehabilitation for UPMC International, associate professor of physical medicine and rehabilitation at Pitt, and core faculty at the McGowan Institute of Regenerative Medicine. “We saw functional levels of muscle regeneration in old animals that paralleled those of their young counterparts, suggesting that this could potentially be a therapeutic option down the road.”

Suspecting that Klotho acts through mitochondria dysfunction, the researchers gave Klotho-deficient animals a mitochondria-targeting drug called SS-31, which currently is in phase III clinical trials. Treated animals grew more new muscle tissue at the site of injury compared to untreated controls, and their strength after recovery rivaled that of genetically normal mice.

Similarly, injecting Klotho into older animals a few days after injury resulted in greater muscle mass and better functional recovery than their saline-treated counterparts. Normal, healthy mice did not benefit from SS-31 after injury. Clinically, these findings could translate to older adults who either sustained a muscle injury or underwent muscle-damaging surgery. Giving them Klotho at the appropriate timepoint could boost their muscle regeneration and lead to a more complete recovery.

Ambrosio cautions that the timing, dosage and route of administration will require future research. “If you just bombard the muscle with Klotho, we do not expect to observe any functional benefit,” Ambrosio said. “We’ve found that mimicking the timing profile we see in young animals seems to be critical. We think that this gives some insight into the therapeutic window.”

Source: Health Sciences at the University of Pittsburgh

The diagnosis is rare, but devastating – children with congenital muscle disorders often never learn to walk. Now, researchers from Basel present a possible therapeutic approach for the first time.