ESC delegates will have a glimpse at how cardiac MRI (CMR) can add information, and sometimes change diagnosis in patients with acute conditions requiring hospitalisation, when Estefania De Garate presents the results of a study that could potentially impact on future cardiac clinical practice.

In the study, one of the first to observe the role of CMR in this setting, De Garate and Dastidar (Figure) compared the value of echocardiography and CMR in a cohort 231 acutely hospitalised patients. They found that CMR confirmed the echo diagnosis in 11% of these patients, but interestingly added significant new information in 41% and changed the diagnosis made on echo in 30% of the cases. ‘CMR is increasingly used in outpatients and our results now show the promising role of this technique in sicker hospitalised patients in whose diagnosis and management can be changed by having a CMR,’ Chiara Bucciarelli-Ducci, who directed the study, told European Hospital.

The study also compared the level of agreement between echocardiography and CMR in the assessment of left ventricular (LV) function. ‘We found that the level of agreement in patients with severe dysfunction was very good but in patients with mild and moderate dysfunction the agreement was only fair. ‘If the heart works normally or really badly the two techniques appear to perform equally well, but when there are mild-moderate abnormalities, CMR has the advantage of higher spatial resolution and can distinguish subtler abnormalities’, De Garate explained.

In a paper currently in submission, they explain in depth the potential use of CMR in the acute setting. The session is likely to attract a lot of interest and, as the abstract was among the top scored, it will be presented in the ‘Cardiac MRI-Advances in Science’ session at the ESC 2016 congress. 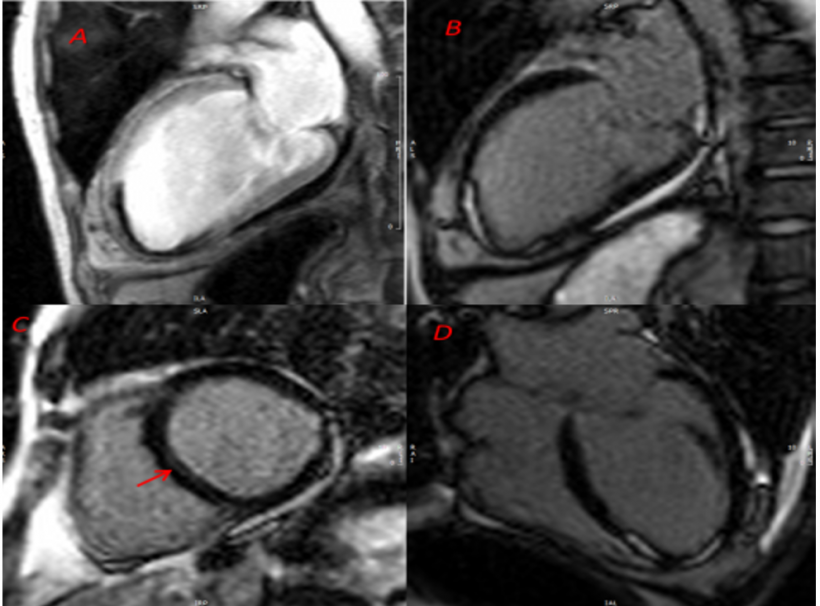 Example of new diagnosis and change in management- Patient with ischaemic heart disease found to have LV thrombus (A) and IHD and non-ischaemic DMC (late enhancement, C red arrow and D). Patient was started onn anticoagulation because of his findings.

This work shows how CMR has an increasing role in cardiology and clinical practice...

Chiara Bucciarelli-Ducci, Director of the study

‘We believe our results could be of interest to a wider cardiac audience. This work shows how CMR has an increasing role in cardiology and clinical practice, and can be a really useful tool for clinicians to guide management and decision-making in hospitalised patients. Echocardiography continues to be the first line imaging test and our study does not want to suggest that it should be replaced by CMR. Quite the opposite, that CMR should be considered and used as an additional test to complement echocardiography when necessary’ Bucciarelli-Ducci said.

The Bristol Heart Institute at the University Hospitals Bristol NHS Trust is a tertiary centre in the SouthWest of England. The CMR Unit performs around 3,000 CMRs a year, an impressive number – as Bucciarelli-Ducci said: ‘The UK is the leading country worldwide where the highest number of CMR scans are performed clinically by a community that is also very active scientifically.’

In the rest of Europe, Italy, Switzerland, the Netherlands, Germany and Spain are significantly active communities with an increasing number of clinical CMR activity per year.

Few factors can limit the use of CMR in clinical cardiology include a significant training in image interpretation. Access to equipment and elevated costs remain as major drawbacks to wider distribution. Examination time usually takes about an hour, but it can be shortened depending on the needs of the patient, and on the information required by the physician. ‘We can tailor the CMR protocol according to the clinical question,’ she said, ‘and give you an answer in 10 minutes when needed.’

‘This piece of work hopefully will contribute to incentivise colleagues,’ said Bucciarelli-Ducci, adding that it will also get the attention of healthcare policy makers and scientific societies to consider CMR in the guidelines.

An advanced form of cardiac MRI has for the first-time enabled clinicians to measure the effectiveness of chemotherapy in patients with the life-limiting condition ‘stiff heart syndrome’.

News • In the heart