Project manager Dr Ali Ramadhan shared his experience – the good, the bad and the ugly – at ECP 2018 last month in Spain. Belgium has a dense population –370 inhabitants/km2– and life expectancy is around 81.4 year. Chronic disease numbers, such as diabetes, are rising – in 2018 there were 540,000 diabetics, according to countrymeters.info. Healthcare expense represents 10.2% of GDP and the main issue is staff shortage, which will increase. ‘By 2035, it is estimated that we will have 40% less workforce. With one pathologist per 56,515 citizens, pathologists are a particularly rare species,’ Ramadhan pointed out.

In that context, switching to digital pathology is a relief, he added. ‘We are all aware of the ongoing complexity and burst of demands for the pathological diagnosis. We have become aware of what technology could bring to pathology in terms of benefits, and thought that digitisation could solve most of our issues. The truth is, it is. It’s the cure to most of our problems.’ Therefore, Professor Isabelle Salmon, head of the pathology department at Erasmus Hospital, decided to integrate digital technology into the existing surgical pathology services for specific uses. ‘The floor wasn’t ready for full digitisation. So, Professor Salmon thought it more beneficial to use digital and the conventional services together and gradually and partially adopt the new technology,’ Ramadhan explained. 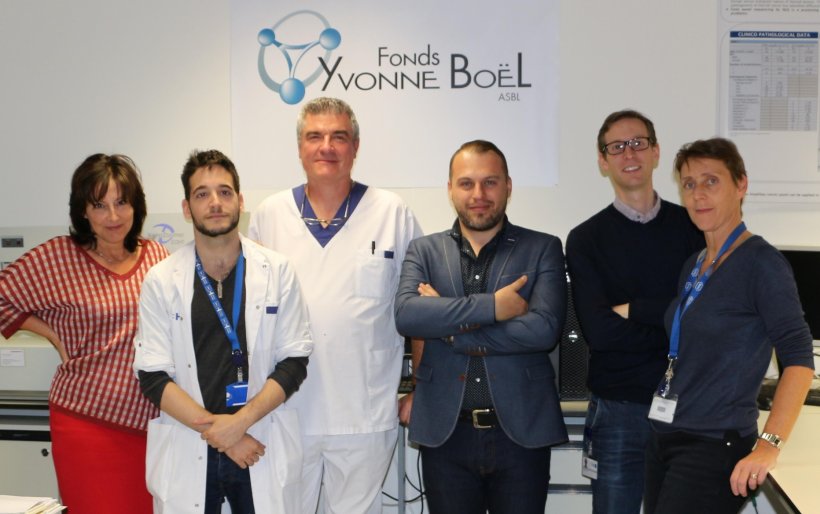 Team SecundOS. Ramadhan: ‘You still need an excellent team with the motivation and spirit working with you to make use of the tool.’

Four years ago, Erasmus Hospital pathologists stepped in that direction, launching into the creation of a digital pathology platform called SecundOS (second opinion simplified) with the financial support from the ‘Fond Yvonne Boël’, a non–profit organisation, to purchase diagnostic solutions and scanners, and to secure the operational budget for the project infrastructures. The project was carried out in a multistep setup, and divided into three phases: creating the platform (call and set up phases), testing the feasibility of the platform and digital service in general (test phase), and starting the production and the actual use (production phase).

This approach enabled re-evaluation of results after each step and to assess different kinds of obstacles that were faced, and already been thoroughly described in the literature. By mid-2015, the SecundOS team began an eight-month test phase to study project workability, to identify functional problems, issue recommendations, establish expertise flows and make improvements for optimal use.

It’s a must, but not an option to have a digital platform in a hospital

‘Our team had many difficulties during that phase, as did all those who have tried to set up digital pathology in the lab,’ Ramadhan recalled. ‘We first bought a scanner and put it in DIAPath, where we used to do the scans, and delivered the slides through shuttle bus and received the images though our web-based sharing system. We noticed a lot of disadvantages: turnaround time went really high, and we had considerable risk for slides loss and breaking. So, we stopped, and bought another scanner to put in our hospital.’ The SecundOS team also noticed there was no perfect link between the platform and the hospital’s laboratory information system (LIMS). ‘Instead of making benefit of time, we had to do all the additional administrative work. This was a burden to the technologist and pathologists, and was not practical,’ he confirmed. ‘Eventually we succeeded in performing matches between the platform and LIMS. Both systems linked perfectly and it became a matter of mouse-clicks. All the information was uploaded and sent remotely.’

After they analysed the statistics of the test phase, the Belgian pathologists launched the production phase and noticed encouraging data concerning the numbers of cases sent for second opinion for around 600 cases, compared to the 100 cases that were sent during the test phase. ‘We also observed increased and more diversified uses of the platform, as we added multiple features. Besides second opinion (24%) and primary diagnosis (2%), new applications, such as using the images for teaching purposes, MDT meetings and research, have been successfully added.’ A topic that still triggers discussion and controversy is the wide use of the platform for academic purposes at the expense of clinical uses such as primary diagnosis, second opinion and frozen section consultations, he noted.

The adoption of the SecundOS by all the pathologists inside the department proved particularly challenging. ‘You can have the perfect workflow, perfect DX platform, but you still need to have an excellent team with the motivation and spirit working with you to make use of the tool,’ Ramadhan said. Not having a properly specialised technician to work in this environment as it develops complicated things. ‘Image quality was not satisfying at first, we had to work on that,’ said Ramadhan, who also recommended having an IT specialist on a daily basis for the platform to run smoothly.

Further issues are compatibility with the rest of the IT systems inside the hospital, to rely on strict criteria upon selecting second opinion experts and to comply with the Belgian and European Union legislation in this framework. The platform must be used across all departments in the hospital to have real value. ‘This must be a multidisciplinary tool: we need to make a stand in our network, make it multidisciplinary, and all specialists are welcome,’ he said. Ramadhan and team must now to link the platform to their biobank. ‘We need a digital library, an archiving system, which is going to be a very important source of information for researchers, patients, stakeholders… We’ve done fifty percent of the job and we still have to do the remaining half.’ Integration of artificial intelligence tools to obtain diagnosis and access the biobank is also a significant goal, and cooperation with the DIAPath team, who are already using the technology in their daily work, will be central.

Other objectives are including more users on the platform and having LIMS connected to the pathology image server, to use all the data in teleconsultation, primary diagnosis, second opinion analysis, interdisciplinary meetings, education and archive. ‘Having a platform is a long journey, you have to work in a team and overcome different kinds of problems. It’s a must, but not an option to have a digital platform in a hospital,’ he concluded. ‘It takes a lot of time to integrate this platform into our daily work, but it will be worthy and cost effective.’

Ali Ramadhan MD graduated from Mosul University School of Medicine, in Iraq in 2004 and did his residency at Jordan University of Science and Technology, King Abdullah University Hospital between 2007-2011. He is board certified (Jordanian and Arabic) in anatomic pathology and joined Nineveh Medical College as a lecturer in pathology. Beside teaching and mentoring pathology residents, since 2012 he has worked as a pathology consultant in Mosul. He became a postdoctoral fellow at Université Libre de Bruxelles ULB, in Belgium. Ramadhan is also project manager of the digital pathology platform (SecundOS) at the pathology department in Erasmus Hospital.

Certain members of Generation Y, who grew up alongside enormous information technology (IT) advances, now occupy decision-making roles. Meanwhile, generation Z is emerging into the continuing IT…

Morphological medicine and pathology will boom

Professor Klaus Kayser, former Head of the Institute of Pathology at Heidelberg University Hospital’s Thorax Clinic, may be retired but he continues to be a leading figure in his discipline, a…